After playing some of its best soccer of the season, the ECU soccer team will try to continue its forward momentum when the Pirates head to Houston for a Thursday night matchup. east carolina university, ECU, women's soccer, houston, roadtrip, gameday, october 17, 2019
Home
Categories
Login 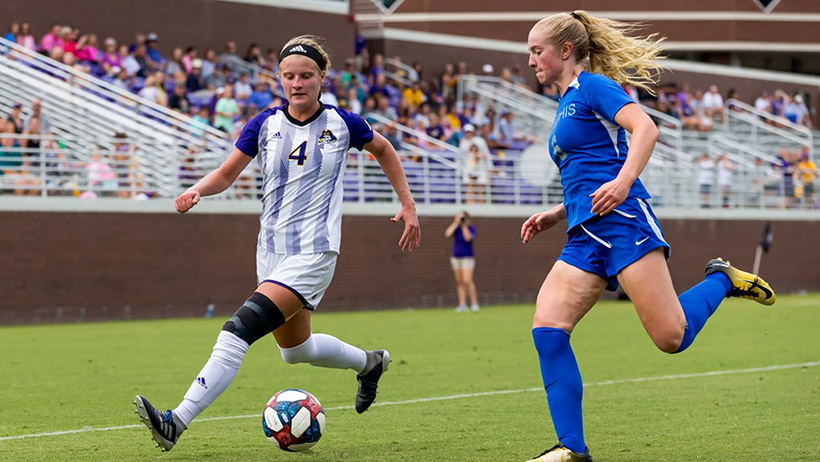 GREENVILLE, N.C. — After playing some of its best soccer of the season, the ECU soccer team will try to continue its forward momentum when the Pirates head to Houston for a Thursday night matchup.

"We saw the team we are capable of being last weekend and we need to carry that mentality into this road trip," said head coach Jason Hamilton. "Every game and every point is crucial."

ECU (5-6-2, 2-1-1) is coming off a weekend that saw the Pirates top Tulsa 3-0 and draw with conference-leading Memphis 1-1, propelling ECU into the playoff picture. Tori Riggs was named the AAC Offensive Player of the Week after scoring against both Tulsa and Memphis and she now leads the team with a career-high 10 points on four goals and two assists. Melanie Stiles was also honored by the conference, earning AAC Goalkeeper of the Week as she made 14 saves in the two games and allowed just one goal in 200 minutes of play. Along with Riggs, Jenna Dages (three goals, two assists), Grace Doran (three goals) and Cashlin Copley (two goals, two assists) have been the main producers on offense for ECU. Dages is tied for fourth in the American with a pair of game-winning goals while Riggs, Doran and Copley all have one apiece.

Houston (3-11-0, 0-4-0) is still looking for its first conference win. The Cougars dropped matches at Temple and Connecticut last weekend, scoring just one goal. The Houston offense has been anemic so far, averaging just 1.00 goals per game, ninth-most in the conference. The defense has also had its struggles, allowing 31 goals, the most in the AAC. Desiree Bowen leads the team with two goals and three assists. Four other Cougars have a pair of goals this season. In goal, Samantha Cude has played in 11 games and has a goals against average of 2.82.

"Houston has some very dangerous attacking players and we have to be solid defensively," Hamilton said. "We have two shutouts so far in conference and have only given up two goals in AAC play. We have to be that stingy in this game if we want to get a result."

ECU has historically had success against Houston, racking up an 11-4-1 record against the Cougars. However, ECU has not beaten Houston since 2015, having lost in 2017 and 2018 along with tying in 2016. Last year, the Pirates led 2-0 behind goals from Dages and Daria Draovitch, but Houston scored a pair of goals in the final 17 minutes to tie the game then went on to win 3-2 in overtime. ECU is 5-2-0 all-time in Houston. The last time ECU played in Houston was in 2017 when the Pirates lost 4-1 despite a goal from Copley.

"We have to be ready for a battle with Houston," Hamilton added. "We are at the point in conference where no one is mathematically eliminated, but some teams have to play with a little more desperation than others. That is what you saw from us last weekend and what I would expect to see from both opponents this weekend."

Kickoff is scheduled for 8 p.m., Eastern time in the Carl Lewis International Complex. A live stream of the match can be found here while live stats can be found HERE.