Twelve Teams Move on to Second Round of Pirate Entrepreneurship Challenge 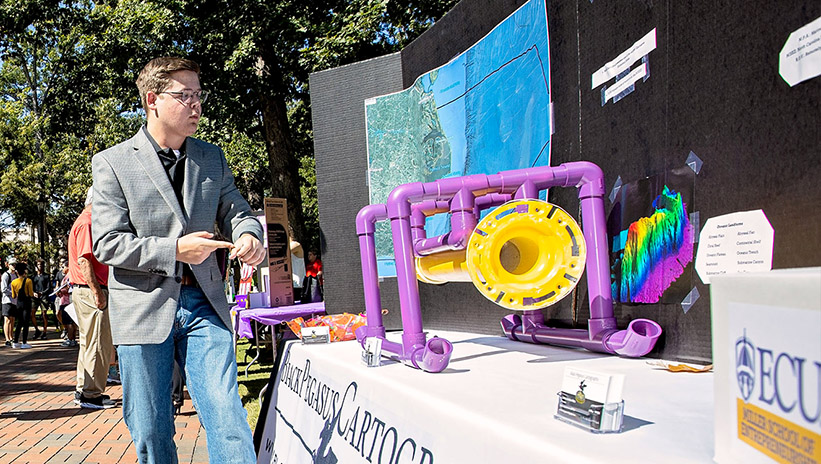 Twelve student-led entrepreneurship teams moved on to the semifinal round of the third annual Pirate Entrepreneurship Challenge after nearly 3,000 votes were cast in Tuesday's opening round of East Carolina University and the Miller School of Entrepreneurship's signature business pitch competition.

This year's challenge marks a new high in total teams ­- 123 across more than 50 departments - and prize money totaling $100,000 in cash and in-kind services, making it one of the richest entrepreneurship challenges in the southeast United States. 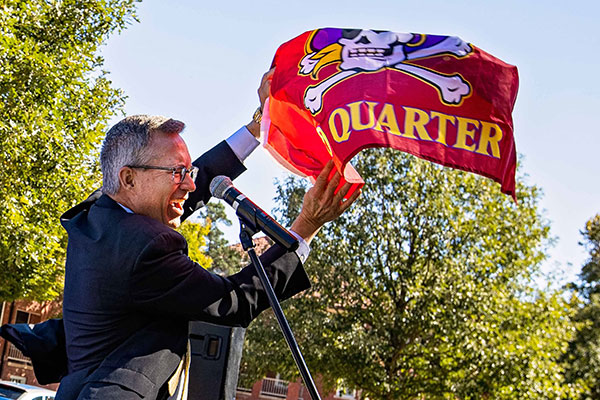 Andy Gilicinski, former SC Johnson & Son global vice president for research development and engineering, waves the “No Quarter” flag before casting the ceremonial first vote at the third annual Pirate Entrepreneurship Challenge.
The dozen teams that will compete in the challenge's second round include:


"It's really a campus-wide initiative," said Michael Harris, director of the Miller School of Entrepreneurship. "We've established ECU as a place that supports new business ideas. Anyone on campus that has an idea can launch it if they're willing to put in the work. The Pirate Entrepreneurship Challenge is a great starting point for some of these business ideas and we're proud of our students from all corners of campus who participated today."

For the second round of the competition, scheduled for Wednesday, Nov. 20, competitors will have five minutes to pitch their business ideas to a group of expert judges. After a follow-up question-and-answer session, six winners will move on to the final round scheduled for Feb. 19.

Past Pirate Entrepreneurship Challenge (PEC) winners and participants have gone on to great success, making strong impressions locally and nationally.

The inaugural PEC winner, Simple & Sentimental, has reached $1 million in sales since winning the competition. Last year's champion, Vybe, plans to launch its nightlife-focused application ­­- now known as Barhound - later this year. Other successful PEC participants have launched products aimed at assisting first responders during natural disasters and aiding veterans with professional and technical services. "Our students have seen the success of our previous challenge participants and they want a piece of it," PEC organizer David Mayo said. "There have been a lot of jobs created and successful entrepreneurs coming out of the PEC so far. It's not just about the winners, however. We try to get everyone who is interested in entrepreneurship into other development programs to help them succeed."

As part of its commitment to support entrepreneurial activities on campus, the Miller School is offering continued mentorship for participants that did not make it through to the semifinal round. Participants are encourage to attend PEC workshops held throughout the academic year.

"We're continuing to add entrepreneurial programs and services on campus, including our new undergraduate degree in entrepreneurship, our RISE29 student entrepreneurship program, the Van and Jennifer Isley Innovation Building, the Crisp Center, the ECU Hult Prize Challenge, I-Corps@ECU and our summer innovation academy," Harris said. "If you're entrepreneurial or innovative, ECU is the place to be."

The second round of the Pirate Entrepreneurship Challenge will begin at 6 p.m. at ECU's Main Campus Student Center Room 249 on Nov. 20.

Over his 32-year career, Gilicinski launched more than half a billion dollars in new products to market. He's worked for major brands including Georgia Pacific, Clorox and Gillette.

Gilicinski wrapped up the opening round with a presentation on innovative successes and failures before announcing the 12 semifinalists. Gilicinski noted that products do not just succeed because of their novelty or need, but because they're able to change human behavior.

"Innovators can stack the odds in their favor by understanding consumer needs and delivering objective value, but changing the way we act really pushes a product to the top," Gilicinski said. "When you address the psychological impact a product has - including taste, smell, feel and sound - you provide an objective benefit and a reason for consumers to change their behavior."