After an undefeated weekend that included a draw with a top-10 opponent, Melanie Stiles and Tori Riggs of the ECU soccer team have earned conference player of the week honors, as announced by the conference on Monday. east carolina university, ECU, women's soccer, AAC, weekly honors, october 15, 2019
Home
Categories
Login 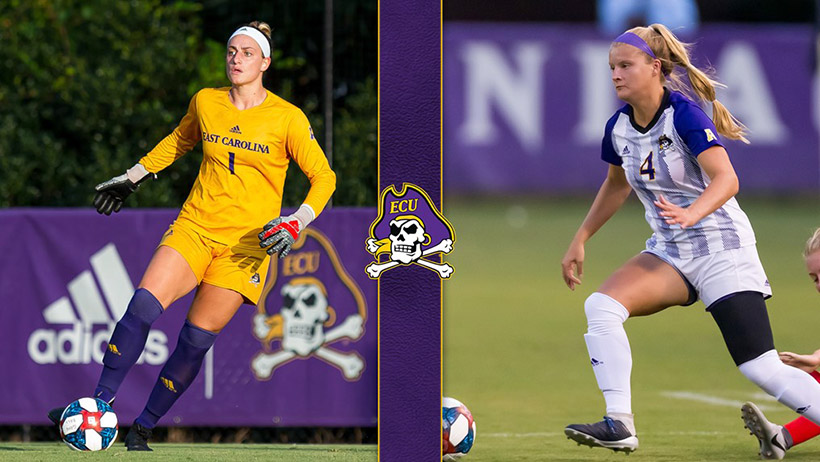 GREENVILLE, N.C.     After an undefeated weekend that included a draw with a top-10 opponent, Melanie Stiles and Tori Riggs of the ECU soccer team have earned conference player of the week honors, as announced by the conference on Monday.

Stiles was named AAC Goalkeeper of the Week after she allowed just one goal in 200 minutes of play. The Bowie, Md., native started her weekend by making four saves to complete her sixth shutout of the season as the Pirates topped Tulsa 3-0. Stiles followed that with her best game of the season in a 1-1 tie with No. 8 Memphis. Stiles made 10 saves against the Tigers, including a pair at point blank range in the final 10 minutes of regulation and in overtime to preserve the tie.

"Mel is a great keeper and it really showed this weekend," said head coach Jason Hamilton. "She was a huge part of our success last season and really seems to turn it on in conference play. In both games this weekend, she made a couple of great saves and gives us a chance to win by keeping us in every game."

Riggs leads the Pirates in scoring after grabbing a goal against both Tulsa and Memphis. The Stella, N.C., product opened the scoring against the Golden Hurricane, pouncing on a loose ball after a corner kick and burying a first-time effort. Against a stingy Memphis defense, the offensive chances were limited for the Pirates. But Riggs made the most of one of her chances, slotting a long-range effort just inside the goal post for her second goal of the weekend. She now has four goals and two assists this season, giving her a career-high 10 points.

"Tori has been battling through some injuries and coming off the bye week allowed her to show what she can do when she is closer to 100%," Hamilton said. "Her two goals on the weekend helped us get two results, but her work rate in those two games were even more valuable."

ECU will be on the road this weekend for a pair of games in Texas. First up will be a Thursday night kickoff at Houston.