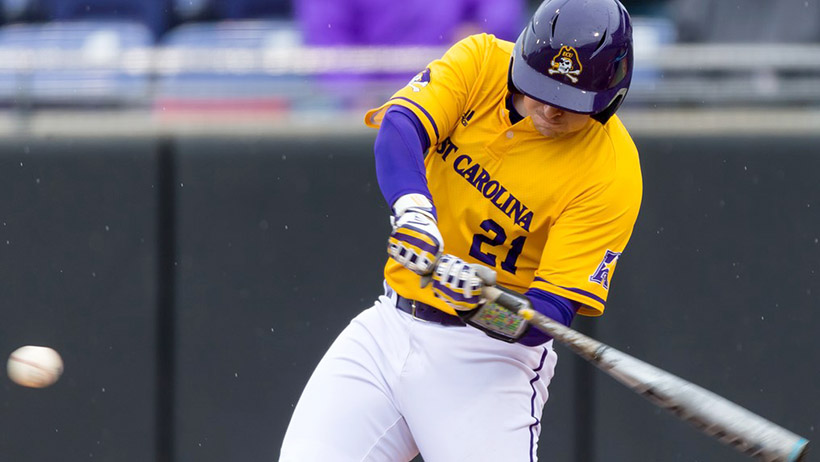 CHARLOTTESVILLE, VA.     In its first intercollegiate game of the fall season, East Carolina fell to Virginia, 15-10 in a predetermined 14-inning exhibition game at Disharoon Park on Sunday afternoon (Oct. 13).

Sophomore Thomas Francisco led the Pirates on the day going 4-for-7 with a pair of runs scored, while junior Alec Burleson was 3-for-6 with a home run and three RBI. Seven of ECU's 17 hits went for extra bases, while 10 different Pirates collected at least one hit on the afternoon.

ECU jumped out to an early 5-0 lead when Zach Agnos singled home Francisco on with a shot to right-center in the second inning. Burleson followed in the next frame with a two-run homer to right pushing ECU's lead to three and then RBI base knocks from Bryson Worrell and another base hit by Burleson made it a five-run ball game midway through the third inning.

UVA responded scoring six runs over the next three frames, which was highlighted by Brendan Rivoli and Devin Ortiz who each went 4-for-6 on the day. Rivoli drove in a game-high four runs including an infield single in the bottom of the seventh to break a six-all tie. Ortiz's double in the sixth that gave UVA the lead for good, was one of just three extra-base hits for the Cavaliers on the day.

Junior righthander Gavin Williams tossed three scoreless innings allowing a pair of hits with one strikeout in the start. Nate Nabholz (2.0 IP, 1 H), Carter Spivey (2.0 IP, 1 H), Agnos (1.0 IP, 1 K), and Garrett Saylor (0.1 IP, 2 BBs, 1 K) all had scoreless outings on the mound for the Pirates. In all, 11 Pirates toed the rubber on the afternoon where the staff allowed 15 runs on 19 hits with 11 walks and six strikeouts.

ECU returns to action on Sunday, Oct. 20 when it hosts Liberty at Lewis Field inside Clark-LeClair Stadium starting at 12 noon (ET).