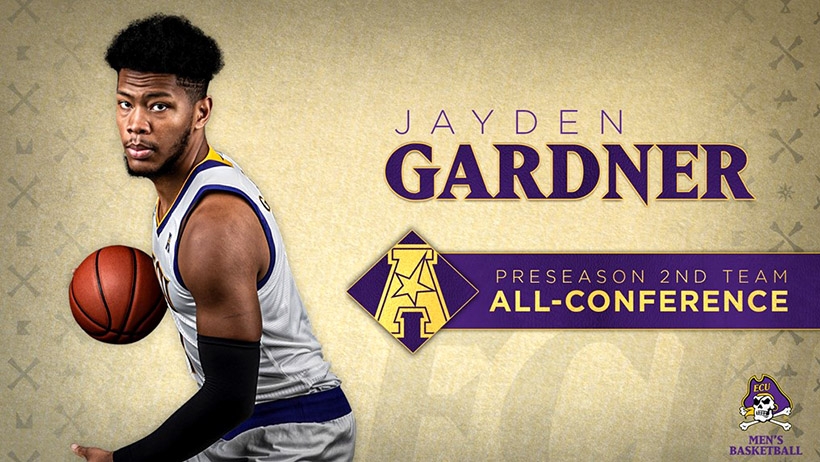 PHILADELPHIA     East Carolina sophomore forward Jayden Gardner was named to the Preseason American Athletic Conference second-team on Monday as the league's men's basketball media day commenced. The 6-foot-7, 235-pound Wake Forest, N.C. native is one of two sophomores on the six-man second-team following a rookie season in which he was a unanimous all-rookie team selection.

As a freshman Gardner finished 10th in the conference in scoring (16.3 ppg) and second in rebounding (8.5 rpg). He is the second-leading returning scorer in the conference behind 2019 Player-of-the-Year Jarron Cumberland (18.8 ppg) of Cincinnati and second-leading returning rebounder behind 2019 American Rookie-of-the-Year Alexis Yetna (9.6 rpg) of USF.

Cumberland was selected to repeat as Player-of-the-Year, while Memphis' James Wiseman was unanimously selected as the Preseason Rookie-of-the-Year. Cumberland was the only player named preseason first-team all-conference by each of the league's coaches.

Cumberland was joined on the all-conference first-team by Wiseman, Temple's Quinton Rose, Houston's DeJon Jarreau and Laquincy Rideau of USF. Rose finished the 2019-20 season tied with Gardner for 10th in the league in scoring, and Rideau led the conference in assists (5.4) and steals (2.9) per game.

Joining Gardner on the second-team were Yetna and David Collins of USF along with Alterique Gilbert and Christian Vital from UConn as well as Temple's Nate Pierre-Louis.

The Pirates were picked to finish in the same place they have each of the past two seasons, 11th, by a vote of the conference's head coaches. ECU came in eighth-place during its first year in The American in 2014-15 followed by consecutive ninth-place finishes in 2015-16 and 2016-17.

Houston and Memphis were selected by the league coaches as the preseason favorites in The American for the 2019-20 season. Both the Cougars and Tigers received 113 points with Houston garnering seven first-places votes and Memphis four. Cincinnati was third in the overall poll with 94 points and one first-place vote.

ECU will be one of seven American conference teams to tip off regular season play on Tuesday, Nov. 5. The Pirates will be the second team in the league to start their season when they host VMI at 7 p.m. Tulsa opens the league's seventh year of competition against Houston Baptist at 1 p.m.

Gardner and senior Seth LeDay, who combined for 40 percent of the Pirates' offense last season, are the lone returning lettermen. Seven junior college transfers and four prep players have joined them for the 2019-20 campaign, including former Virginia Tech guard Tyrie Jackson and Washington guard Bitumba Baruti.

The Pirates' roster has 10 players listed at 6-foot-5 or taller, including a trio of seven-footers: freshman Charles Coleman along with junior college transfers Ludgy Debaut and Edra Luster. Freshmen Tristen Newton and Brandon Suggs as well as junior college transfers Miles James and J.J. Miles, with Baruti give ECU considerable size on the wings as each is listed 6-foot-5 or taller.