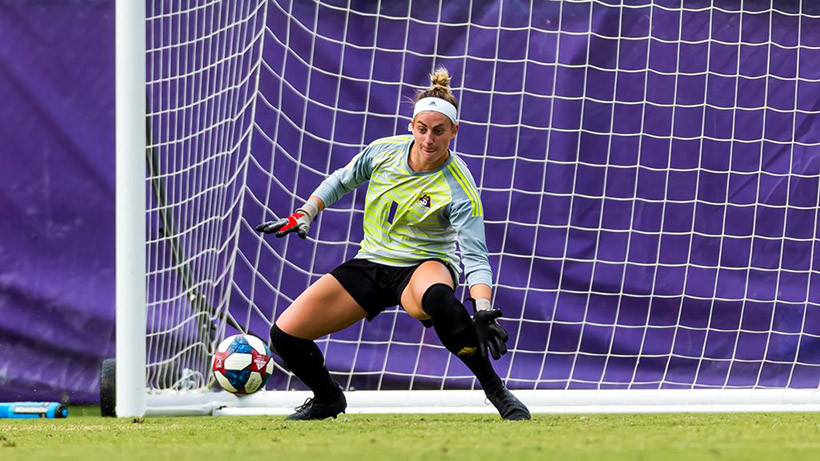 GREENVILLE, N.C.     A total team effort helped the ECU soccer team pull out a 1-1 tie against No. 8 Memphis on Sunday in Johnson Stadium.

"We're happy with that result," said head coach Jason Hamilton. "Memphis is a phenomenal team and they've been playing great. They don't give up a lot of goals so for us to score on them really gave our team a lot of confidence. They're a good, we knew they were going to be good. They're athletic, they're physical and I thought our girls did a great job of matching that."

ECU's record now stands at 5-6-2 overall and 2-1-1 in AAC play. Memphis remains undefeated in conference games with a 5-0-1 mark and is 13-1-1 overall. It is the first time ECU has gotten a result against a top-25 team since tying then-No. 16 NC State last August.

ECU could have easily folded in the first half in the face of the Memphis pressure. The Tigers took 12 shots in the first 45 minutes compared to just one for the Pirates. But five saves from Melanie Stiles as well as a couple of crucial blocks by ECU defenders helped keep the game scoreless heading into the halftime break.

A two-minute stretch midway through the second half proved decisive. After coming out in the second half with a stronger attack, ECU jumped out ahead in the 68th minute. A loose ball reached Tori Riggs in the Memphis half. Riggs surged forward towards the Tiger penalty area with the ball on her right foot. As she drifted to the right, she took a shot towards the left of the Memphis goal. Tiger goalkeeper Elizabeth Moberg got a hand to the shot, but could not stop it from slipping just inside the goalpost for the opening tally.

However, the Pirate lead was short lived as less than two minutes later, the game was tied. The Tiger goal came off a scramble in the ECU box. Clarissa Larisey was able to corral the ball with her back to the Pirate goal and laid a pass off to Claire Abrey at the top of the box. Abrey curled a shot with her right foot into the side netting of the Pirate goal to equalize for Memphis.

Both teams had chances to find a game-winning goal. Larissey got behind the Pirate defense on two occasions, once in the second half and once in the first overtime period, but each time Stiles was able to turn away her shots. ECU missed scoring by inches in the opening overtime when a cross from Riggs was just too far in front of a diving Jenna Dages to tap home. With both teams coming up empty at the end of the second overtime frame, the game finished in a 1-1 draw.

"The past two games this weekend have been the best soccer we've played all year," Hamilton said. "Hopefully that's confidence going into the rest of the season. We've just got to come out and compete and battle and our girls did an awesome job. They showed a lot of heart today. We gave up a goal really quick after we scored, but they didn't stop."

Memphis finished with a 23-7 advantage in shots and a 10-1 edge in corner kicks. Stiles made 10 saves for the Pirates while Moberg had three stops for Memphis.

"Memphis had a lot of opportunities, but I thought we had some really dangerous chances to win the game," Hamilton added. "I'm just super proud of the team with how they fought and how they battled. Hopefully that shows them just who they are and we can get some more results the next couple of weeks."

ECU will hit the road next weekend for a pair of games in Texas. First up will be a matchup with Houston on Thursday, Oct. 17.