SUPREME COURT WATCH: The Supreme Court Hears its Second Challenge to Title VII of the Civil Rights Act of 1964 (Does it Protect Transgenders?) | Beaufort County Now

SUPREME COURT WATCH: The Supreme Court Hears its Second Challenge to Title VII of the Civil Rights Act of 1964 (Does it Protect Transgenders?)

Login to Send a Private Message to Diane Rufino
The Supreme Court just began its 2019-2020 term on Monday, October 7. The following day, on Oct. 8, the justices heard oral arguments in two potential landmark cases, both challenges to Title VII of the Civil Rights Act. The cases are Bostock v. Clayton County, Georgia (Consolidated with Altitude Express Inc. v. Zarda) and R.G. & G.R. Harris Funeral Homes Inc. v. Equal Employment Opportunity Commission. In the first case, the plaintiff asks the Supreme Court to include sexual orientation (LBGT) within the meaning of "sex" in Title VII for protection against discrimination. Bostock is a gay man. In the second case, which is the focus of this article, the plaintiff asks the Court to include transgender individuals for protection within the meaning of "sex" in Title VII. 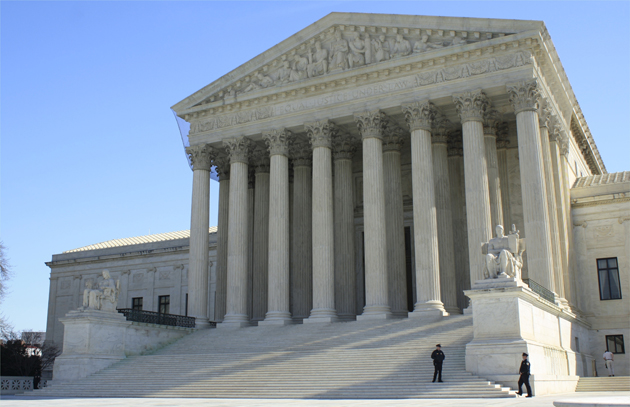 The United States Supreme Court    photo by Stan Deatherage
The questions, of course, will be whether the provision was written to include such individuals and if not, whether or not the federal court has the proper authority to enlarge the meaning of Title VII to include them going forward.

The facts of the R.G. & G.R. Harris Funeral Homes v EEOC case are as follows: The plaintiff (the challenger), Aimee Stephens, considered herself a transgender woman for most of her adult life but presented herself as a male, which he said caused him constant emotional stress. In 2013, he decided to come out to family and friends, and arranged to undergo reassignment surgery within the next year, and began to implement lifestyle changes consistent with his ultimate transition. At that time, he had been an employee of R.G. &. G.R. Harris Funeral Homes for six years and had a excellent work record. He wrote to his supervisor, explaining that he was taking a vacation and explaining his plans to transition to a female. He also notified the supervisor that when he returned to work, he would be wearing attire appropriate for a female employee. Note, when he returned, he would still be a biological male. He would not have had the surgery by that point. Two weeks later, Stephens was notified by mail that he had been terminated by the funeral home's owner Thomas Rost. Stephens then filed a complaint with the Equal Opportunity Employment Commission (EEOC), believing he was discriminated against on account of him being a transgender. He alleged that the provision in Title VII which protects a person from discrimination on account of 'sex' ["It shall be unlawful to discharge an individual because of that person's sex..." (paraphrasing)] includes transgender individuals.

(a) Employer Practices. It shall be an unlawful employment practice for an employer -

(1) to fail or refuse to hire or to discharge any individual, or otherwise to discriminate against any individual with respect to his compensation, terms, conditions, or privileges of employment, because of such individual's race, color, religion, sex, or national origin; or

(2) to limit, segregate, or classify his employees or applicants for employment in any way which would deprive or tend to deprive any individual of employment opportunities or otherwise adversely affect his status as an employee, because of such individual's race, color, religion, sex, or national origin.

This case, therefore, will determine (or may determine) whether discrimination on the basis of gender identity is covered by the Title VII of the Civil Rights Act of 1964.

The EEOC surprisingly agreed with Stephens' position and took the case against the funeral home to the US District Court for the Eastern District of Michigan. In 2016, the court found for the funeral home on two bases: (1) First, it held that Title VII of the 1964 Civil Rights Act neither encompassed transgender persons nor gender identity individuals (neither were considered protected classes, or even considered at all), and (2) Second, it held because Rost was a devout Christian who does not accept that one can change one's gender and who ran the funeral home under his religion, he was protected by the Religious Freedom Restoration Act.

The EEOC appealed to the Sixth Circuit, and in March 2018, it reversed the decision, ruling that Title's VII "discrimination by sex" does include transgender persons. Alliance Defending Freedom (ADF) took the funeral home's case and appealed to the Supreme Court for review. The Court accepted the case.

MY OPINION is that the Supreme Court should NOT decide this case. The Court should respect the language and intent of the legislature (Congress) when it passed the Civil Rights Act in 1964. Sexual orientation and gender identity were not included in the provision; those categories of individuals were not legislatively given protected status in the Act. It is NOT the role of the federal courts (or any court system) to make law from the bench or to enlarge the meaning of laws from the bench. That would be judicial activism. The proper recourse is for the Supreme Court to acknowledge that transgenders (gender identity individuals) and sexual orientation individuals present a new situation with respect to discrimination and then leave it to Congress to either amend Title VII to include them or to decline to include them as protected classes. But the rightful branch to address this issue is Congress, and the Supreme Court must respect that and not usurp that responsibility by reinterpreting the law and enlarging its meaning judicially.

NC VALUES founder, president, and spokeswoman, Tami Fitzgerald was at the Supreme Court on Tuesday, Oct. 8 for the oral arguments. She delivered a speech on the steps of the imposing building, urging her view and the view of NC Values regarding Title VII. The transcript of her remarks is provided below. Her remarks are well worth the read:

"We are here today to ask the U.S. Supreme Court to restore sanity and the rule of law. Americans should be able to rely on what the law says. Yet, in these three cases, the lower courts have effectively redefined the word "sex" in federal law to include "gender identity," creating unfair situations for women and girls, and punishing businesses like Harris Funeral Homes for relying on what the law says. Redefining "sex" to mean "gender identity" creates chaos and is unfair to women and girls.

Title VII was enacted to ensure that men and women have equal employment opportunities. It was not designed to be a radical social engineering project that shoehorns sexual liberties into federal law. Yet some lower courts, including the Sixth and Second Circuits, jump from stereotypical ideas about the roles of men and women to conclusions that render heterosexuality-and even the very idea of biological sex-illicit stereotypes.

The cases at issue here, have ripped the stereotyping terminology from the pages of the Supreme Court's earlier decision in Price Waterhouse v. Hopkins and commandeered it for purposes far removed from Title VII's objectives. The result is a sweeping redefinition of biological reality that injects sexual orientation and/or gender identity into the meaning of the word "sex."

The Sixth Circuit substitutes gender identity for sex in Title VII, rewriting the statutory text and redefining the reality of plaintiff's sex.

Gender identity theory cements stereotypes in stone rather than eradicating them from the law. It reduces what it means to be male or female to a collection of stereotypes that many people-especially women-have spent many years trying to overcome and that many people reject.

The Sixth Circuit was wrong when it precluded an interpretation of Title VII that reads "sex" to mean only individuals' chromosomally driven physiology and reproductive function. That is precisely the definition of "sex" in Title VII and many other laws. The circuit courts attempt to redefine reality and infuse the federal law with meanings that are simply not there.

Laws cannot be enforced or rightly interpreted if word definitions can be shifted at will to mean whatever someone wants them to mean.

Blurring the binary concept of male and female detracts from the fundamental purpose of both Title VII and Price Waterhouse-to ensure that male and female employees have equal employment opportunities.

Male and female are both human beings, but they are not interchangeable in every respect. When the line is blurred, there is no assurance that women will have equal opportunities vis-à-vis men.

Title VII and other civil rights laws are in place to protect equal opportunities for women; changing "sex" to mean gender identity undermines nearly 50 years of advances for women.

(1) It undermines equal opportunities for women. Men identifying as female will take women's places on athletics teams and on the award podium. Just this fall, the North Carolina High School Athletic Association changed its rules regarding participation, so that transgender athletes can now compete according to their gender identity, rather than their biological sex. The Court's decision in these cases will impact whether female athletes in North Carolina have to continue under this oppressive rule or can return to a fair playing field, where biology determines which team on which boys can compete-not feelings.

(2) It jeopardizes bodily privacy rights of women by forcing organizations to open women's shelters, locker rooms, restrooms, and showers to men who say they are women. For example, the Obama Justice Department attempted to force schools and government buildings in North Carolina to allow men who say they are women into women's bathrooms, showers and locker rooms. Women should be able to expect privacy and safety in such facilities.

(1) It puts employers in unfair situations. Employers must treat men who believe themselves to be women as if they are women, unless those employees don't "meet the expectations" of what women "typically" look like. This is an impossible standard and forces employers to engage in the very stereotypes the law is supposed to condemn.

(2) It sacrifices freedom of conscience.

(3) It forces doctors to participate in-or employers to pay for-providing hormone blockers or surgical efforts to alter sex in violation of religious beliefs.

(4) It endangers freedom of speech.

(5) It forces business owners, employees, teachers and others to speak in violation of their conscience by compelling them to use pronouns and other sex specific terms according to identity rather than biology. For example, in Charlotte and Raleigh , North Carolina, teachers and guidance counselors have been told they must use gender neutral terms such as "students" rather than "he" or "she" and that they must use preferred pronouns for students who identify as the sex other than their biological sex.

So much is riding on the Court's decision in these cases. This decision will impact public schools, employers, business owners, employees, and churches. We implore the Justices not to re-define what it means to be a woman and a man, but rather to follow the law, common sense, and the order of Creation."

NC VALUES fights tirelessly for North Carolina families and for our North Carolina conservative values, and we owe Tami Fitzgerald and her organization a debt of gratitude. She is always on the front line. If you are looking for a worthwhile and honorable organization to donate to, please consider to donating to NC Values.