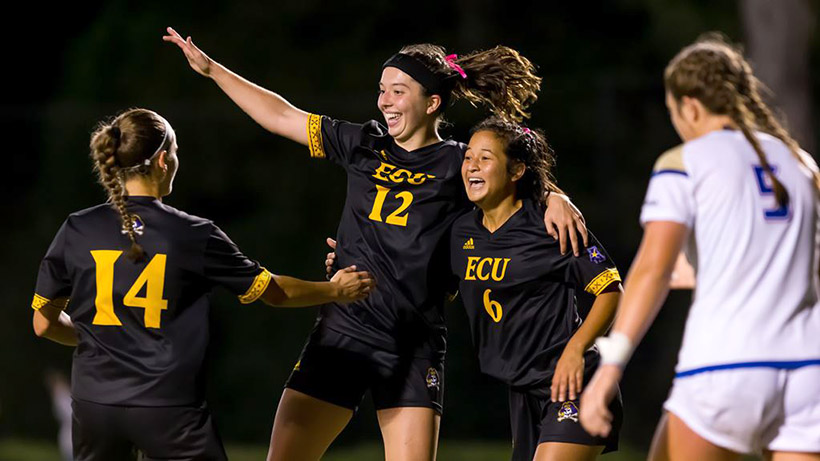 GREENVILLE, N.C.     A second half surge helped the ECU soccer team run away with a 3-0 win over visiting Tulsa on Thursday night inside Johnson Stadium.

"We're obviously really, really happy with that result," said head coach Jason Hamilton. "I think that's the first time we've had a two or more goal margin in a conference game since I've been here. Conference games are tough. We know who Tulsa are. They battle, they compete and I thought our ladies did a really good job of coming out and competing with them."

ECU improves to 5-6-1 overall and 2-1-0 in conference play while Tulsa falls to 8-7-0 with a 2-3-0 AAC record. It was the first win at home for ECU this season and is the biggest win over an AAC opponent since Hamilton took over prior to the 2018 season.

The Pirates were both encouraged and frustrated by their first half performance. ECU took nine shots in the period compared to just three for Tulsa and could have easily taken a lead into the break. Jenna Dages saw three different shots slide just outside of the left goalpost in the 45 minutes while Lexi Moore got free in the Golden Hurricane box, but her attempt was saved by the Tulsa goalkeeper.

"We were dangerous in the first half and we had a lot of good chances, we just weren't able to find the back of the goal," Hamilton said. "At halftime, we didn't have to make many adjustments. We just said we're playing really well, but we've got to be a little bit more opportunistic in front of the goal and I thought, in the second half, we did a really good job of being scrappy and battling in the box."

It did not take long into the second half for the ECU breakthrough to occur. Less than a minute after the restart, ECU earned a corner kick. Daria Draovitch drove the ensuing set piece into the Tulsa box. Dages reacted to it first and took a shot, but it was blocked by the Tulsa goalkeeper. Luckily for ECU, the rebound fell to Tori Riggs and she powered it home, giving the Pirates a 1-0 lead in the 47th minute.

ECU doubled its lead off another set piece. Erin Mikalsen was fouled just inside the halfway line, earning ECU a free kick. Carsen Parker launched a ball deep into the Tulsa box and with ECU players challenging for it, the ball bounced off a Tulsa defender and into the back of the net. The own goal put the Pirates up 2-0 in 69th minute.

The Pirates put the game to bed with a quick passing sequence in the 72nd minute. A pass from Grace Doran sprung Cashlin Copley free down the right wing. Copley surged into the Tulsa box before cross to the back post where Doran was there to tap home.

ECU finished with a 19-11 advantage in shots and took six corners to just two for Tulsa. Melanie Stiles made four saves to complete the sixth shutout of the season for the Pirates. Mica MacKay finished with nine stops for the Golden Hurricane.

"It was a good game for us for a lot of reasons," added Hamilton. "It puts us back in the win column and in conference, it puts us in a good position moving forward. But it was kind of a breakout game for us offensively. We got a lot of shots, which we had struggled with the last couple of weeks and we got some goals on the board. I think our team knows where we're at and they know how important the Thursday games are for us with the lack of depth because of the injuries. We told them you just have to come out and leave everything on the field and get a win on Thursday. Then anything on Sunday in this conference is a bonus."

ECU will be back in Johnson Stadium on Sunday when the Pirates host Memphis. Kickoff is scheduled for 1 p.m.