Did You Know? Student-Athletes Can Be Admitted to UNC Schools Despite Low Academic Success | Beaufort County Now

Did You Know? Student-Athletes Can Be Admitted to UNC Schools Despite Low Academic Success

Published: Sunday, October 13th, 2019 @ 2:35 pm
By: James G. Martin Center for Academic Renewal   ( More Entries )
Publisher's note: The James G. Martin Center for Academic Renewal is a nonprofit institute dedicated to improving higher education in North Carolina and the nation. Located in Raleigh, North Carolina, it has been an independent 501(c)(3) organization since 2003. It was known as the John W. Pope Center for Higher Education Policy until early January 2017. 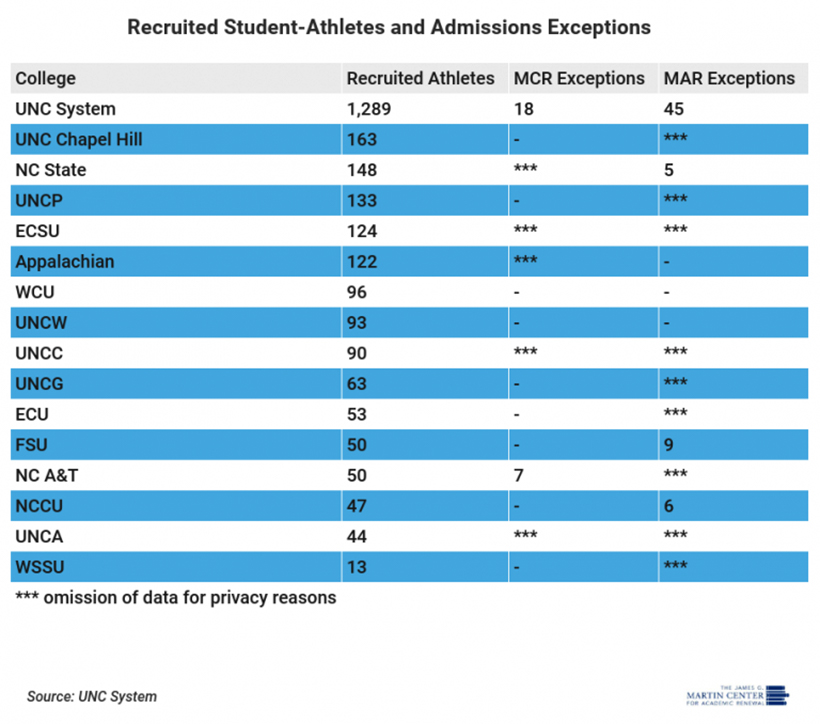 College admissions standards are meant to determine whether a student is academically prepared to succeed at college. Colleges also have Minimum Admissions Requirements (MARs) and Minimum Course Requirements (MCRs), which are set floors that a would-be student's test scores, GPA, and completed high school courses can't fall below for admittance.

In the UNC system, those requirements are already quite low: The minimum combined SAT score is 880 and the ACT score is 17. They also call for six language classes, four math classes, three science classes, and two social studies classes, as well as a 2.5 GPA-a "C" average.

Graduation rates, however, dampen the success story: nine of 15 UNC schools had federal graduation rates for student-athletes lower than their peer schools. Furthermore, the same number had NCAA graduation success rates lower than their athletic conference peer schools, even though the GSR "allows institutions to exclude student-athletes who leave their institutions prior to graduation as long as they would have been academically eligible to compete had they remained."

Do those lower graduation rates have anything to do with the fact that some UNC system schools admit student-athletes who do not meet their academic standards? It is hard to say, but one thing is clear: If a UNC coach wants an athlete badly enough, the rules in place make it easy to admit a sports star, even if their grades would bar a non-athlete from campus.