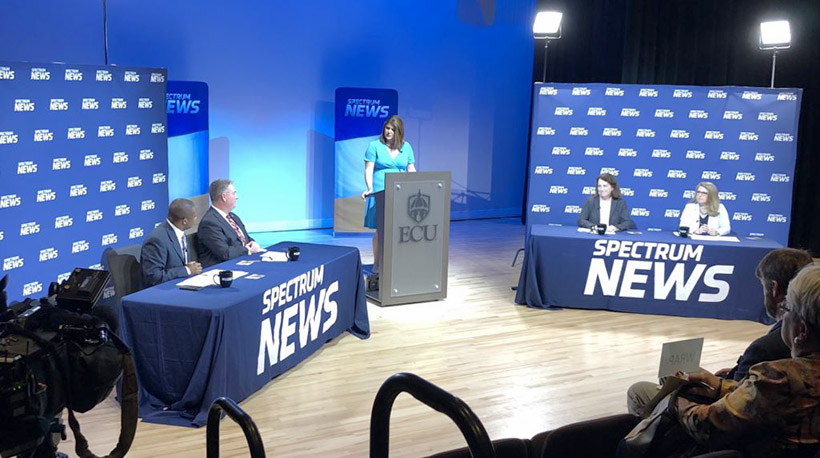 Rural hospitals are finding it more difficult to stay open.

Since 2006, 11 rural hospitals in North Carolina have closed - seven in the past six years, as more people move to cities and suburbs.

"Access to Health Care in Rural Areas" was the topic of discussion as a panel of state lawmakers and health care professionals gathered Tuesday, Oct. 8, in the Black Box Theater at East Carolina University in Greenville.

There's no easy fix for the problem of fading rural health care, said the panelists for the debate, including Sen. Don Davis, D-Pitt, and Sen. Jim Perry, R-Lenoir.

"We need to be realistic about the population loss that we see, and that the state forecasts we're going to continue to see in those areas, and what health care really needs to look like in the future," said Perry.

Also on the panel were Dr. Chelley Alexander, distinguished professor and chair of Family Medicine at ECU's Brody School of Medicine, and Tina Gordon, CEO of the N.C. Nurses Association.

This rural-urban divide has made it difficult to recruit physicians to practice in rural areas.

"It is tough to entice a physician, a family, to move to a rural area that doesn't provide the quality of life that they have in other areas, and we need to be realistic and honest about that," Perry said.

So, what can legislators do? Or, what should they do?

"I do think that we need to have the conversation, and by 'we' I think that I really mean the physicians' group and the nurses' group," Perry said. "Because, if you bring stuff to the General Assembly, we can mess it up very quickly. We're very good at that."

"North Carolina has been experiencing [a rural-urban divide] for some time. When we talk about this, the General Assembly can take some steps. We can have the honest, hard conversations about Medicaid expansion. ..." said Davis. "We can support special provisions, such as a new Brody School of Medicine. We should have the hard-core conversations about advanced nursing practitioners."

The debate often circled back to the idea of Medicaid expansion. Democrats argue expanding Medicaid would keep rural hospitals open.

"When we talk about our rural hospitals, I do not believe we can just push aside the conversation of Medicaid expansion," said Davis. "We have to make sure we are putting in place the revenue stream for the hospitals to survive."

"When you have population loss, it's going to impact any business, any industry, any service that's provided because you have to have enough head count in that area to sustain - to have employees, to have patients," said Perry. "I think until we address the cost side of health care, and the growth in those costs, that any revenue solution just works on one side of the equation, and it's temporary."

Alexander said she believes Medicaid expansion could be a solution to the rising cost of care.

"I think that Medicaid expansion is really important because it's not only going to increase the amount of money that comes into the hospital, but it's also going to reduce the cost of care," Alexander said. "You may know that hospitals can't turn away folks. That puts the hospitals at risk financially when there's a lot of uninsured [people] in the area."

Alexander emphasized preventative care as a means for reducing cost. An example would be treating hypertension early, before the condition leads to a heart attack or stroke.

The closing of rural hospitals results in rural North Carolinians traveling longer distances for care. Evidence suggests these people are, as a result, less likely to seek preventative care.

The panelists agreed solutions required all sides to get together and discuss, debate, and compromise.

"There may be the need for give and take on all sides of this, as opposed to not talking, which is more common," said Davis. "At the end of the day, this shouldn't be about politics, this should be, absolutely, 100%, about doing what's best for the residents of North Carolina."

Spectrum News recorded the debate. An edited version will be broadcast 11:30 a.m. Sunday, Oct. 13. The full-length debate will available online at spectrumlocalnews.com.

The final health care policy debate of the 2019 series is 7 p.m. Oct. 17 in the Vance-Granville Community College Civic Center. Policy experts will discuss the delivery of medical services. It's free and open to the public.