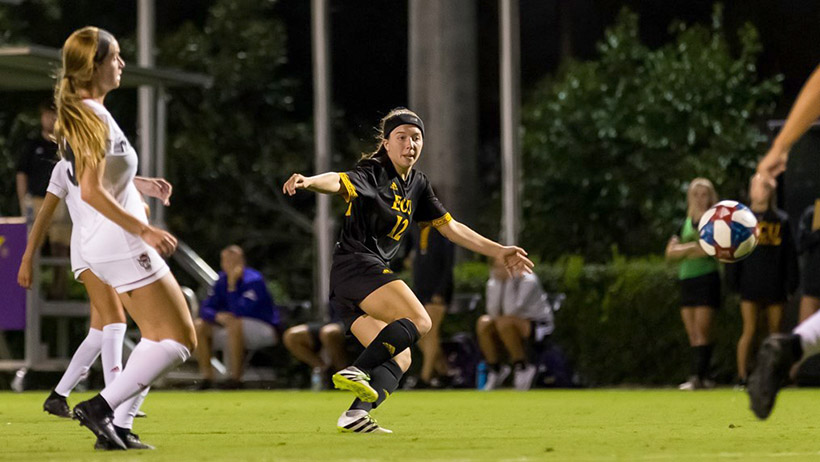 GREENVILLE, N.C. — Coming off its bye weekend, the ECU soccer team will play its first home game in more than three weeks when the Pirates host to Tulsa on Thursday night inside Johnson Stadium.

"This is a big weekend for us, we need to take advantage of being at home," said head coach Jason Hamilton. "Tulsa is coming off a good weekend getting two wins and putting themselves in good positioning for conference standings."

ECU (4-6-1, 1-1-0) used the bye week to get some players some rest and heal up injuries. Already this season, ECU has used 11 different starting lineups. The Pirates have gotten offense from up and down the lineup, although it is once again Jenna Dages who leads ECU in scoring, as the Cypress, Calif., native has three goals (two of which are game-winners) and an assist for seven points. Right behind her is Tori Riggs and Cashlin Copley, both of whom have scored a pair of goals. In net, Melanie Stiles is coming off a weekend that saw her allow just one goal in over 180 minutes of play and she now has 44 saves and a .746 save percentage on the season.

"We are coming off a bye weekend which allowed us to get some much needed rest," Hamilton said. "The team knows the importance of each home conference game and they are excited to get out there for what should be a good battle."

Tulsa (8-6-0, 2-2-0) bounced back with a pair of wins after starting conference play 0-2. The Golden Hurricane knocked off both Temple (1-0) and Connecticut (2-0) to jump back into the hunt for a playoff spot. Tulsa has been led by its offense, with the Golden Hurricane averaging 2.36 goals per game, which is second in the conference, while allowing 1.50 goals per game which ranks ninth in the league. Reagan Whitlow and Aubrey Lechlider lead Tulsa with four goals each, with Whitlow adding two assists for a team-high 10 points. Ashlan Hustava is the top creator for the Golden Hurricane, passing out six assists to place her in a tie for third in the American. In goal, Mica MacKay is third in the league with 52 saves while her save percentage of .776 ranks fifth.

ECU holds a narrow 7-5-1 lead in the all-time series. However, Tulsa has won three of the past four meetings and the Golden Hurricane have gone 5-2-1 since 2011. Last year, Tulsa took a 3-0 lead before Jayda Hylton-Pelaia scored a consolation goal in a 3-1 loss. The last time ECU hosted the Golden Hurricane, ECU took a 1-0 victory, giving the Pirates a 3-1-1 home mark against Tulsa.

Kickoff is scheduled for 7 p.m., on Thursday evening. Admission is free for all fans and those who cannot make it to Johnson Stadium can watch the live stream HERE or follow the live stats HERE.