The little boy in a blue shirt emerged from the pandemonium in the center of the Greenville Boys and Girls Club gym wearing a look of pure bewildermen east carolina university, ECU, football, local community, giving back, october 10, 2019
Home
Categories
Login 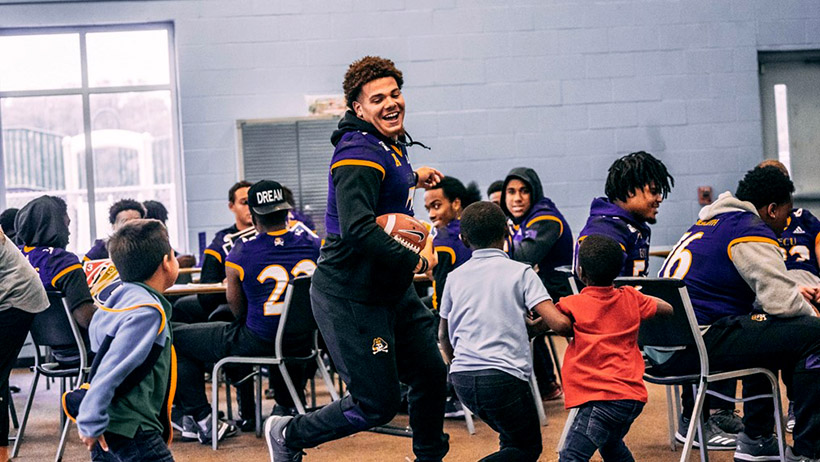 The little boy in a blue shirt emerged from the pandemonium in the center of the Greenville Boys and Girls Club gym wearing a look of pure bewilderment.

Maybe the screaming and yelling was too much to take or maybe he was just ready for dinner. Either way, he needed something from somebody.

Senior receiver Deondre Farrier was standing along the sideline between the two sets of bleachers. After some encouragement from a mom nearby, the youngster wandered over to the Pirate wearing No. 1 on his purple jersey and spoke.

Farrier leaned over, then kneeled so he could hear. The boy extended his arms and the Pirate embraced him with a hug. Farrier grinned and led the boy into the hallway for a quieter conversation.

"It's a great reminder of what a platform we have to have a positive impact on others," Farrier said. "It's hard to remember that you are a role model when it's just us out on the practice field. It's cool when we can make a kid smile."

"Some of our kids have no clue that ECU is in their town and they don't see themselves going to college," Unit Director Shonda Morris said. "We serve kids from age six to 18, so it's great having the football team here so they can see college students in person. We emphasize academic success, good character and living a healthy lifestyle every day. It makes it more real for them to hear it from somebody new and these guys are great role models."

The Pirates and the kids were divided into seven groups, each in a separate room with a separate topic. After 15 minutes or so, the kids switched rooms, while the players welcomed a new group.

The Pirates put on a bullying skit in one room. 6-foot-7 Zech Byrd, 6-foot-6 Sean Bailey and 6-foot-4 D'Ante Smith were playing keep away with a couple of their shorter teammates.

"You can always share the ball," said quarterback Zach Gwynn. "We have all kinds of different personalities on our team, but we treat each other with respect. Be nice to each other."

Another learning opportunity happened down the hall.

"Yo, yo, yo. Let's listen up!" freshman defensive lineman Immanuel Hickman's voice boomed. "We're here to talk to you about risky behaviors. Don't lie and don't cheat. When you cheat, you are only cheating yourself. You don't want to be known as a dishonest person."

Sophomore running back Trace Christian was next. "Drugs, alcohol and vaping are all bad for your body," he said. "Don't give in to peer pressure. They are also illegal. Don't do things that will land you in jail."

Academics was the theme one room over.

"You can't play if you get bad grades," junior kicker Jake Verity said. "We are busy with a lot of stuff and so are all of you, so you have to learn to manage your time. Take care of your homework first and study for tests, then go do the fun stuff."

"Doing your homework helps you understand what your teacher was talking about in class," senior defensive lineman Alex Turner said. "Also make sure you turn in your assignments on time."

The message seemed to sink in for the most part.

"I was excited when I heard they were coming," said 11-year old Lakiara London. "They told us they can't play if they don't do their work, so we should always do ours. They told us to study hard and not listen to peer pressure."

ECU Head Strength and Conditioning Coach and Greenville native John Williams was along to help supervise.

"Hopefully, this gives our guys a sense of purpose outside of themselves," Williams said. "It should also be a good reminder for them of what Coach Houston tells them every day. They should feel blessed to have an opportunity to play college football and get a good education. We are giving back to the people who support us and hopefully we'll inspire these kids to work hard to succeed."

Everyone packed the gym to wrap up the visit. Amid much enthusiastic hollering, players and kids teamed up for a down and back relay race with a twist-or a pop in this case. When the runner reached a chair on the other side of the gym, he had to sit down and burst the balloon that was sitting in the chair before he could run back and tag his teammate. Two rounds of tug of war followed.

Williams gathered the players for a group huddle. "ECU, ECU, ECU....Pirates!" echoed off the walls.

With that, the players headed for the busses with their mission accomplished.

"It's amazing to think that we are like superheroes to these kids," quarterback Holton Ahlers said. "It makes us want to do everything better."

Sometimes a hug from a superhero makes all the difference.