For the first time, a company started by East Carolina University faculty members has received a Phase II Small Business Technology Transfer (STTR) grant from the National Institutes of Health.

RFPi, a Greenville medical device company, was awarded $1.49 million for continued development of technology that will be used to evaluate patients with peripheral arterial disease (PAD), a subset of vascular disease that affects blood flow to the lower extremities.

Patients with PAD are at increased risk for heart attack or stroke; left untreated, the condition can lead to the loss of a leg. About 20 million patients in the United States have PAD. 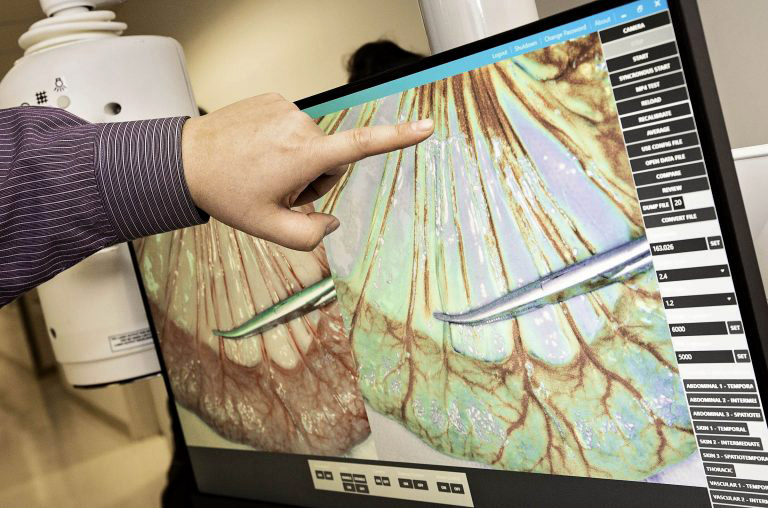 New technology developed by ECU researchers allows physicians to observe blood flow in real time during surgical procedures. | Photos: Cliff Hollis
Currently, a health care provider conducts an initial evaluation for PAD by measuring the patient's blood pressure in the arm and comparing that to a blood pressure measurement taken at the ankle. Called the Ankle-Brachial Index Test, it detects PAD about 75% of the time when performed by a trained health care provider. However, in patients who don't have symptoms, the test becomes significantly less accurate; in diabetic patients, accuracy falls to less than 50%.

"Peripheral arterial disease poses a legitimate and dangerous threat to people at highest risk for the condition - who happen to be the same people for whom the current standard of diagnostic evaluation is less than effective," said Dr. Bruce Ferguson Jr., a cardiothoracic surgeon and chief medical officer of RFPi. "We need a better technology solution for identifying patients with and without classic PAD symptoms, to avoid the devastating complications of this disease process. Such a solution addresses a significant unmet need in vascular disease, would benefit patients and their families, and improves care quality while lowering health care costs."

The Phase II STTR provides funding for continued development of Multispectral Physiologic Visualization (MSPV), based on technology invented and patented by Ferguson, Dr. Xin-Hua Hu and Dr. Cheng Chen while all were on ECU's faculty. RFPi was founded to commercialize this technology in 2014, and Ferguson and Chen joined the company's scientific leadership while Hu and Dr. Ken Jacobs, both of ECU's Department of Physics, spearhead the ECU side of the project.

MSPV - trademarked as iCertainty - is the first commercially available device that generates images of blood flow distribution in vessels and tissues during surgical procedures in real time without the use of injections, dyes, radiation or direct patient contact, and without interruption of the surgical procedure. 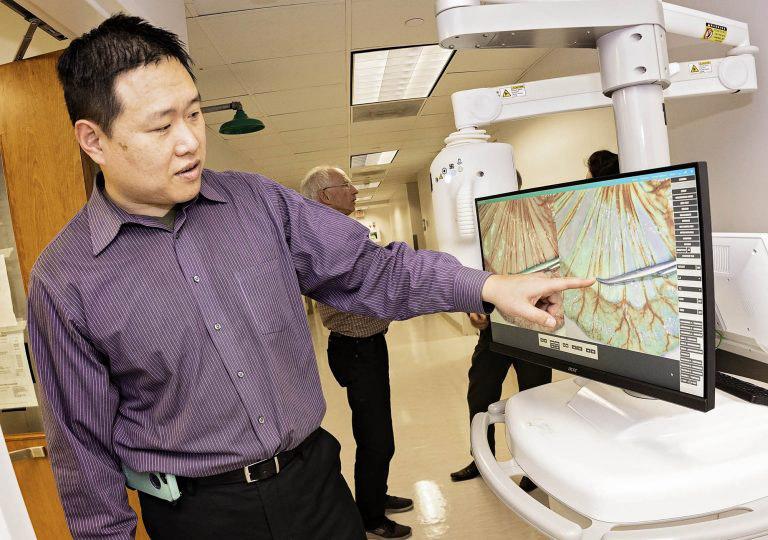 Dr. Cheng Chen points out technology that allows surgeons to observe blood flow during surgical procedures.
Currently, surgeons are restricted by visible light and are not able to see the blood supply traveling through vessels and in tissues in real time.

The technology is relevant for many medical disciplines, especially where analysis of the physiology and pathophysiology of blood flow might impact the technical decisions of the clinician and outcomes of a procedure.

Complications of inadequate blood flow in tissues can occur in up to 15% of patients during major surgeries. Identifying this in real time means the problem can be fixed in real time, thus reducing or eliminating complications, and avoiding re-operations that can lead to additional patient suffering, delayed recovery and more costs.

iCertainty is expected to improve clinical outcomes and reduce costs for patients, hospitals and third-party beneficiaries. The inventors believe the technology will help surgeons make fewer guesses during procedures, leading to better choices with the data iCertainty provides.

RFPi received clearance earlier this year from the U.S. Food and Drug Administration to begin marketing iCertainty for use in open surgeries.

Previously, NCBiotech awarded a $250,000 Small Business Research Loan to RFPi in 2017 to help develop a clinic-based prototype of the technology. The company received a Phase I STTR award of nearly $225,000 in 2017 by the Department of Health and Human Service's National Institutes of Health.

"We're proud of what the RFPi team and our ECU researchers have accomplished," said Dr. Jay Golden, vice chancellor for research, economic development and engagement. "This is a tangible outcome of the rapid increase of research and innovation taking place at ECU. Last year, we reached all-time research and innovation milestones, including the doubling of research expenditures in just three years while realizing an increase of more than $32 million in grants awarded to ECU."

According to ECU's Office of Innovation and New Ventures, during the 2018-19 academic year, ECU nearly doubled its number of supported startup companies from 18 to 35; tripled its number of micro-enterprises from 12 to 39; and disclosed 75 inventions - a 120% increase from the previous year. The university also created and retained 747 jobs last year, up more than 400 jobs from last academic year.