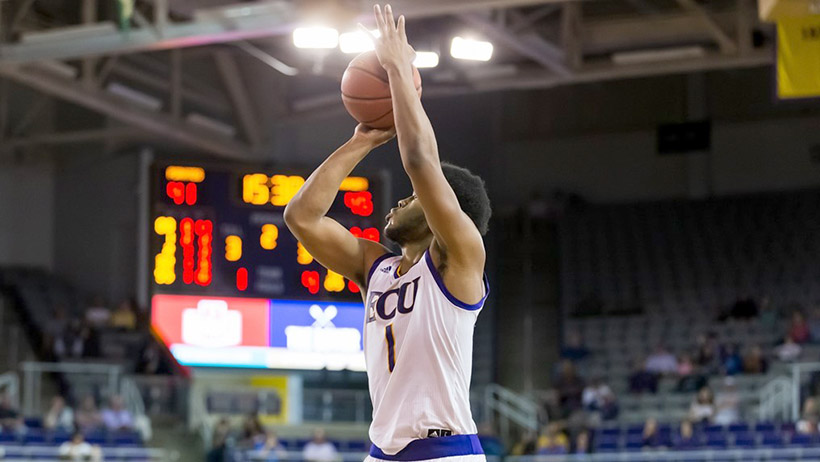 KILL DEVILS HILLS, N.C.     East Carolina wrapped up a four-day retreat to the Outer Banks on Tuesday morning following three days of intense practice and extracurricular activities that included a fishing trip to Jennette's Pier and a hike up Jockey's Ridge.

Williams served as a manager under ECU Head Coach Joe Dooley back in the 1990s when Dooley was in his first stint as the Pirates' head coach.

After arriving Saturday afternoon, ECU got to work with its first of five practice sessions over the weekend followed by dinner. The Pirates came together for two additional periods Sunday before hitting the court again Monday afternoon.

"It's a real good team bonding opportunity," Dooley explained. "With no one at school it was a good time for these guys to get away, spend some time with each other and have a unique experience.

"I think they had a good time here, bonding with their teammates and experiencing some things that they've never been able to."

With the arrival of 11 newcomers, the Pirates used the extended weekend as part of ECU's Fall Semester Break to continue to develop their identity, build upon their strengths and improve their flaws.

"We've got some work to do, but we were able to get a bunch of practices in which I think will benefit our team," Dooley said. "We've had some guys in and out of practice so we've been getting some different looks, seeing what guys can adjust and what they can pick up."

The Pirates used the extended weekend as part of ECU's Fall Semester Break not only to enhance their skills, but also to escape the daily stress of being a student-athlete.

"It brings everybody closer for sure and it gives us a chance to go over coach's system and learn more how he wants things to go," junior Tyrie Jackson said. "We've gotten better at communicating on the court by doing activities off the court this weekend. I feel like those things help us form a bond and make us a better team."

"I believe this trip could be more beneficial to us because we've got an entire new team," sophomore Jayden Gardner said. "We're building chemistry and comradery."