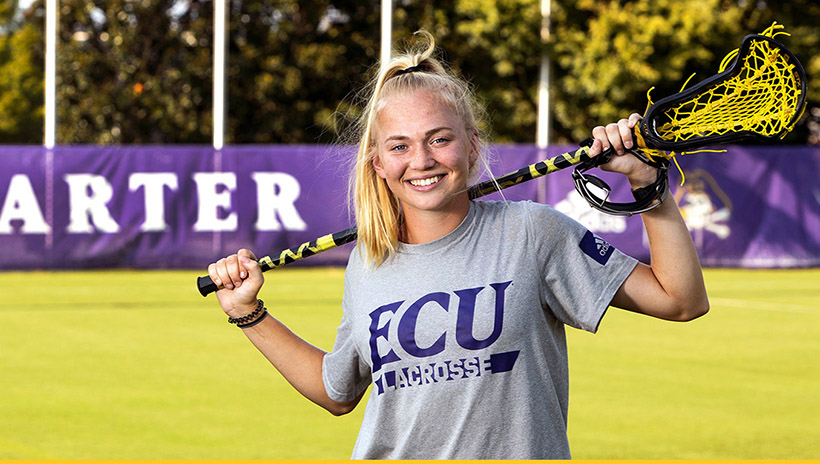 Liz Blumthal wants to leave her legacy at East Carolina University while preparing to care for others.

Blumthal, a junior from Suwannee, Georgia, is an Honors College student with a 3.67 GPA and is in the College of Nursing at ECU. She also is in her third year on the women's lacrosse team. 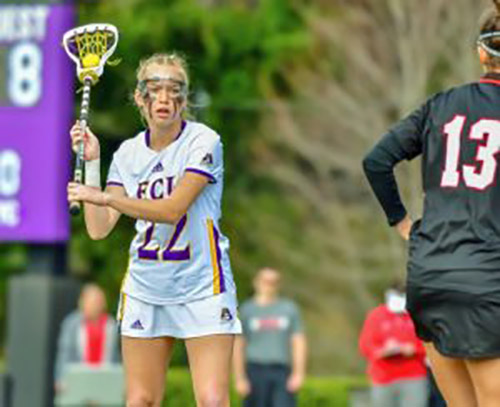 Blumthal is in her third year as midfielder for the ECU women’s lacrosse team. | Photo: Contributed
Blumthal says she chose nursing because of her mother, who is her role model.

"My mom went back to school when I was in the sixth grade and now she's a registered nurse," Blumthal said. "Being a nurse is kind of what I've always wanted to do, especially after I got to see my mom become one."

When she isn't learning how to be a nurse, Blumthal is on the field playing the sport that she loves. Blumthal says that while lacrosse was a major factor in coming to ECU, it wasn't the only thing she wanted.

"I didn't want to have to sacrifice anything that I wanted in a university just to play lacrosse," Blumthal said. "I wanted to be able to pursue my degree, have a football team and play lacrosse, and it happened that ECU was a place that had all three of those things."

Blumthal says she loves lacrosse for the speed of the game and the team aspect of the sport. She was a member of the first recruiting class for the ECU lacrosse team when the program started in 2018.

"There's around 2,500 girls that get to play lacrosse at the Division I level and not everyone has to chance to actually start a program, so being able to put my hands in wet cement and help build a program from the bottom up and make a legacy for myself and the program, it's a pretty cool opportunity," Blumthal said.

While being an athlete and going to nursing school can be challenging, she says that prioritizing her time and having an understanding coach have helped.

"Coach Moore realizes that our degree comes first, so if I do miss a practice because of something with nursing school, it isn't a big deal," Blumthal said.

Blumthal was named to the AAC All-Academic Team for the 2018-2019 season and has been named to the Dean's List four times. She also is involved in the community by helping at the Boys and Girls Club and is a community coach for lacrosse in her hometown.

Blumthal says that she hopes to be a perioperative nurse once she graduates.

What is something cool about ECU that you wish you knew during your first year?: I wish I had known about all of the events ECU has to offer such as Barefoot on the Mall.