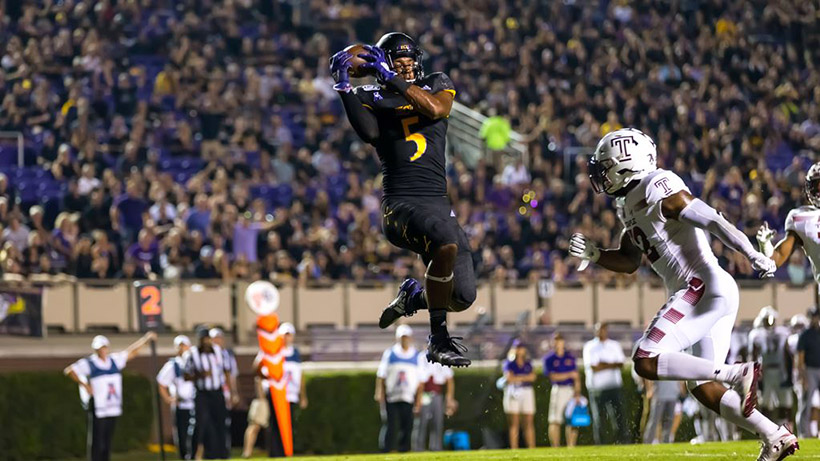 GREENVILLE, N.C. — East Carolina's spotlight before a national ESPN audience on Thursday night started with a blackout and breakout but ended with a knockout and lights out.

In the end, a physical and talented Temple team walked out of Dowdy-Ficklen Stadium with a 27-17 American Athletic Conference victory to extend its string of wins over the Pirates to six dating back to Oct. 21, 1995, in Greenville.

ECU (3-3, 0-2 AAC) delighted a black-out crowd of 33,253 with a quick start and early lead before the Owls (4-1, 1-0 AAC) seized command with a stranglehold on the third period, building a 27-10 advantage. They did not put a final stamp on the victory until a bizarre final few minutes when the bank of lights above the new TowneBank Tower cut off at 11 p.m. with 3:52 left to play.

The Pirates struck for a late touchdown and recovered an on-side kick before finally bowing out.

Director of Athletics John Gilbert said the light shutdown was "a programming error with the computer." Play resumed 15 minutes later.

"You were hoping they were going to come back on," ECU head coach Mike Houston said. "It was not ideal. The other option was to call the game, and I didn't want to do that. We had third-and-13 and there's three-and-a-half minutes to play. There's a lot of ball left to play right there."

But not enough to overcome a Temple team that controlled the line of scrimmage much of the night and possessed enough offensive weapons to silence ECU's hopes of ending its long drought in the series.

The backfield duo of Ra Davis and Jager Davis spearheaded a rushing attack that piled up 237 yards on 50 carries, while wide receivers Branden Mack and Isaiah Wright each collected nine receptions and more than 100 yards receiving.

Davis, coming off a 135-yard performance against Georgia Tech, amassed 68 yards on 11 carries by halftime against the Pirates and finished with a career-best 157 yards on 24 attempts and one touchdown. Gardner added 60 yards on 14 carries and a score.

Quarterback Anthony Russo, replaced by Todd Conteio for one series in each half, turned in a solid performance by completing 23 of 34 passes for 208 yards and a touchdown.

Temple's biggest maladies were 12 penalties for 80 yards along with one fumble that ended a scoring threat.

ECU's offense sputtered between its fast start and late strike, finishing with 327 total yards. Sophomore quarterback Holton Ahlers flashed a hot hand early by completing his first four passes and 7 of 8 on the opening drive but struggled mightily under constant pressure the rest of the way.

"We looked like what we wanted to look like and showed some of the things we're capable of," Houston said of the quick start. "We were not consistent after the first quarter offensively. It's not one person's fault. We've got to do a better job coaching them and we've got to continue to develop our offensive personality."

The Pirates still faced just a 17-10 deficit at the half when Temple seized command in a third quarter in which in dominated virtually every significant offensive category:


Aside from the numbers, the body language irritated Houston.

"From my feeling on the sideline, we've got to learn how to bow our back when the momentum's dead against us," he said. "Learning how to overcome adversity is not easy. There are some really bad habits here that we're breaking. One of those is hanging our head and feeling sorry for ourselves. They ain't going to do that. I friggin' ripped their rear end. I'm going to find 11 that will fight. But I thought they responded. That's the good thing."

So was the quick start that led to a 7-0 lead and had the home fans energized.

"I love the way we started the ballgame," Houston said. "We were competing, the stadium was electric. It was everything I came to East Carolina for. I'm sitting there thinking right there at the end of the first quarter what a special place this could be."

For the second-straight week, the Pirates found themselves in a deep opening-possession hole but pieced together an impressive drive to claim an early lead. Colby Gore, who stepped out of bounds at the one-yard line on the opening kickoff against Old Dominion, only reached the 10 before being swarmed under by Temple's quick pursuit.

The Pirates needed 12 plays - and three critical offsides penalties on Temple - to cover those 90 yards with an effective mix of quick passes to the edge and gashing runs by Ahlers, Trace Christian and Demetrius Mauney. Ahlers completed his first four passes and connected on 7 of 8 on the drive, capped by a 14-yard toss to Johnson.

The Owls kept the drive alive on third-and-4 from the 16 by jumping offsides, then repeated the infraction on a third-and-7 at the Temple 41 and second-and-13 at the Temple 19.

Temple got a spark from Centeio on the Owls' third possession, replacing Russo and directing an 11-play, 65-yard drive that reached the 12 before Will Mobley came on to boot a 29-yard field goal. Centeio gained 21 yards on the ground and completed both of his passes for 33 yards.

Russo returned on the next series and Temple moved 55 yards in 10 plays, primarily on the legs of Davis and Gardner, to take a 10-7 lead. Gardner converted a fourth-and-2 from the 19 with a 10-yard run, then scooted the final nine yards through a hole on the right side.

ECU quickly answered with a 39-yard field goal by Verity following a pair of Ahlers-to-Johnson hookups for 11 and 25 yards and a 15-yard penalty on Temple. The Owls drew a pair of flags on Verity's field goal, but neither 5-yarder would have provided a first down, so Houston opted to take the points.

A 55-yard return of the ensuing kickoff by Isaiah Wright set the Owls up for the go-ahead score with 3:21 left in the half. Davis did the bulk of the work, grinding out 30 yards on four carries and bulling through the middle for the final yard one play after a 22-yard pass from Russo to Mack.

Temple penetrated ECU territory on each of its first two possessions of the second half but came up empty. The Owls reached the 13-yard line on their first series before committing the game's first turnover. Gore appeared to snare an interception in the back of the end zone after Ja'Quan McMillian got a hand on a Russo pass, but a replay showed the ball hit the turf.

On the next play, Kendall Futrell sacked Russo for a 9-yard loss, jarred the ball loose and pounced on it. Centeio made his second appearance on the next series and moved Temple to the 38 before the drive stalled.

Temple did not waste excellent field position after its defense stymied the Pirates and forced Jonn Young to punt from the end zone. Russo re-entered with Temple at the ECU 48 and completed consecutive passes to Wright. After three Davis carries moved the ball to 6. Wright took a pitch on a jet sweep and waltzed in untouched for a 24-10 lead.

Temple extended its lead to 27-10 in the fourth quarter on a 39-yard field goal by Mobley at the end of a 10-play drive that stalled at the 22.

That stood until after the lights went out then came back on. Ahlers capped a nine-play, 84-yard drive with a 10-yard scoring pass to Johnson with 29 seconds showing. Aaron Ramseur recovered Verity's on-side kick, but a sack of Ahlers delivered the final knockout.

ECU heads into a bye week before traveling to nationally ranked UCF on Oct. 19.

"We're 3-3 going into the bye; that's not where we want to be," Houston said. "We've all seen improvement week in and week out. We're going to continue to grow and continue to change habits and continue to learn how to fight."