Published: Thursday, October 3rd, 2019 @ 3:17 pm
By: James G. Martin Center for Academic Renewal   ( More Entries )
Publisher's note: The James G. Martin Center for Academic Renewal is a nonprofit institute dedicated to improving higher education in North Carolina and the nation. Located in Raleigh, North Carolina, it has been an independent 501(c)(3) organization since 2003. It was known as the John W. Pope Center for Higher Education Policy until early January 2017. 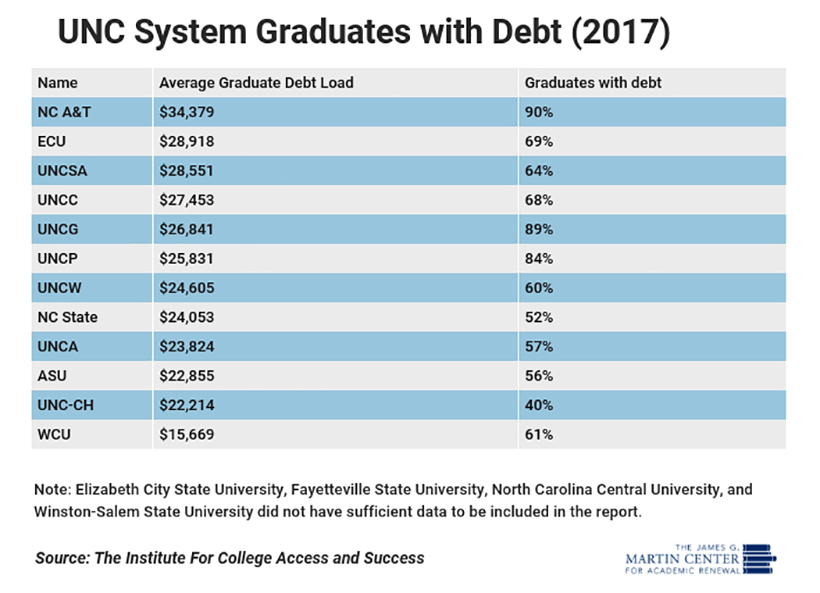 In North Carolina, at least, graduates carry less debt than their peers. North Carolina ranks 37th in the country for total debt levels of its graduates, with the average student holding $26,526 in debt upon graduation.

And the average graduate from a University of North Carolina school holds $25,433 in student debt, less than the state average.

North Carolina's flagship institution, UNC-Chapel Hill, is best at keeping debt proportions low-only 40 percent of its graduates have some form of debt. But at other UNC schools, the picture changes. Most UNC graduates carry some debt, and over 80 percent of graduates from NC A&T, UNC-Greensboro, and UNC-Pembroke leave with debt.

Western Carolina University students hold the least amount of debt per student in the UNC system, with the average student holding $15,669 in debt. This may be in part due to the new NC promise tuition plan, which offers a flat tuition rate of $500 per semester at Western Carolina, Elizabeth City State University, and UNC-Pembroke. The NC Promise plan is funded by $51 million from the state legislature and has resulted in enrollment increases of 14 percent at UNC-P, 6 percent at WCU, and 19 percent at ECSU.

Students are not entirely to blame for taking on so much debt; only wealthy students can afford to pay tuition and fees without loans. The federal government perpetuates this problem by offering easy loans, along with colleges who load students with debt for degrees that don't provide them with the skills necessary to repay the loans. Parents are also complicit for not teaching their children to think about how much debt is too much.

The current political solutions to address this debt problem are not sufficient. So far, they have ignored how colleges and the government make student debt worse and tend to be "quick fixes," such as wealth redistribution. Politicians on the left promote proposals to force the federal government to pay for existing student debt by taxing individual and institutional savings, and politicians on the right ignore the issue entirely.

David Waugh was a Martin Center intern. He studies economics at Hampden-Sydney College.