With neither discussion nor debate, the University of North Carolina’s Board of Governors voted unanimously to approve Beaufort businessman Randy Ramsey as the board’s new chairman. carolina journal, randy ramsey, UNC, board of governors, october 1, 2019
Home
Categories
Login

Ramsey Unanimously Approved as UNC Board of Governors Chair 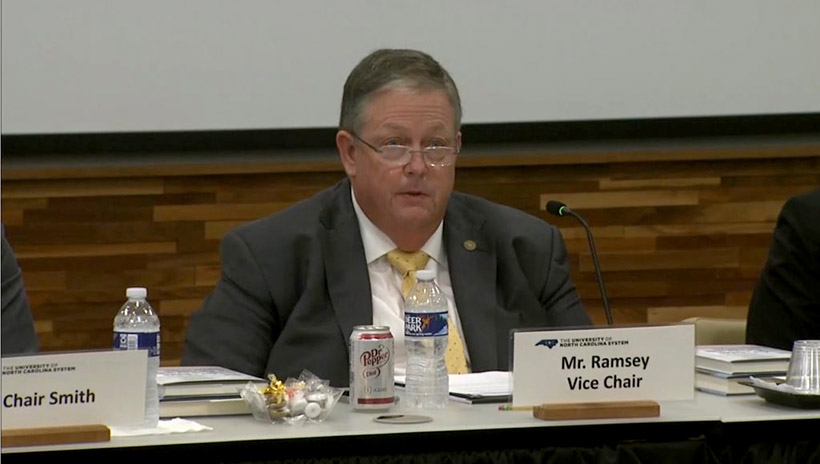 With neither discussion nor debate, the University of North Carolina's Board of Governors voted unanimously to approve Beaufort businessman Randy Ramsey as the board's new chairman.

Board rules dictate members must wait 30 days before selecting a new chair, but they voted to suspend the rules. Ramsey, who was vice chair, was the only nominee. He has an associate's degree in marine propulsion from Carteret Community College.

Board member Doyle Parrish said he supports Ramsey's nomination, but he cautioned the board against suspending the rules in the future.

"If we continue to suspend the rules that will, optically, be a problem," Parrish said.

Ramsey was named to the board in 2017 and became vice chair in 2018. Board member Wendy Murphy was unanimously approved to succeed Ramsey in that role.

Before serving on the BOG, Ramsey was a member of the N.C. State University Board of Trustees. Former Gov. Bev Perdue appointed Ramsey to the N.C. State board in June 2009, and he served for eight years.

Ramsey, a registered Republican, has a long history of giving money to Democrats and Republicans. He also has connections to an air travel controversy involving Perdue.

The Beaufort businessman donated money to Perdue's campaign and provided her with unreported air travel. Ramsey, or his boat-building company Jarrett Bay Boatworks, is connected to at least four flights provided to the 2008 Perdue campaign. He was later reimbursed for the flights after investigators took an interest in Perdue's flying habits.

Ramsey received donations from the family of Elizabethtown businessman D.M. "Mac" Campbell Jr., who had close ties to the administrations of Perdue and Gov. Mike Easley. McQueen Campbell, "Mac's" son, provided numerous unreported flights to Easley and testified against him in a 2009 State Board of Elections hearing.

Despite his history of supporting Democrats, Ramsey in 2012 challenged Rep. Norm Sanderson, R-Carteret, in the N.C. Senate District 2 Republican primary. Sanderson was a state House member who decided to run for a Senate seat.

Despite significantly outspending Sanderson, Ramsey lost the primary by a wide margin. Sanderson won 52% of the vote; Ramsey got 32%.