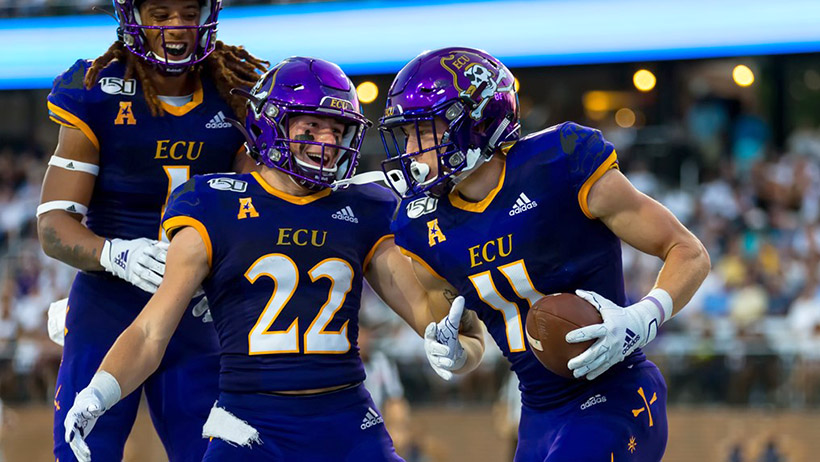 NORFOLK, Va.     There's nothing like celebrating a victory on an opponent's turf. East Carolina had longed for that feeling for more than two years, so Saturday's hard-fought 24-21 win at Old Dominion stirred some extra emotion.

The Pirates endured an often ragged and bizarre game with multiple twists and turns to claim their second straight three-point win over the Monarchs and move above .500 at 3-2 - matching their win totals from each of the past three seasons. ECU entered on a skid of 10 consecutive road losses dating back to Sept. 25, 2017, at UConn and had dropped 16 of their last 17 games away from Dowdy-Ficklen Stadium.

ECU will be back home - where it is 2-0 this year - on Thursday when it hosts Temple in an American Athletic Conference game.

"Win on the road, in a hostile environment, packed stadium, good football team, to get to 3-2 on the season going into a Thursday night home game," an ecstatic first-year head coach Mike Houston said. "We're going to celebrate this one tonight and get ready for Temple tomorrow."

ECU's recipe for ending its road woes before a turnout of 18,643 at S.B. Ballard Stadium mixed big plays in the passing game that secured an early lead, a swarming defense that bottled up ODU and dual-threat quarterback Stone Smartt, and enough guts to hang on when tensions mounted late.

Both teams exited a bit perplexed in a game featuring a blocked punt, blocked field goal, six fumbles (two lost and two reviewed at the goal line), four interceptions (two by each team) and 13 penalties. The Pirates came up with both of their interceptions in the fourth quarter but didn't seal the win for good until freshman C.J. Johnson recovered an onside kick with 2:08 to go.

The Pirates withstood multiple charges by the Monarchs (1-3) after building a 17-3 halftime lead. ODU cranked up its defensive pressure in the third quarter, coming up with one turnover and energizing its home crowd by closing to within 17-13. ECU regrouped for an early fourth-quarter touchdown to reinstall a double-digit lead.

"That shows right there the resiliency this team has developed already," Houston said. "We didn't hang our heads, we stayed together, we kept fighting. We talk about that all the time. It's easy to talk about. It's hard to do in the moment. But I'm really proud of them the way they pulled together there in the fourth quarter."

ECU limited an ODU offense playing without its leading rusher and top two receivers to just 293 total yards. Smartt completed 20 of 30 passes for 203 yards and was picked off twice. He accounted for the bulk of ODU's 90 yards on the ground with 76 yards on 22 carries, but 37 of those yards came on a first-quarter run.

ECU's relentless defense chalked up 11 tackles for loss, including four sacks. Kendall Futrell was credited with 3.5 tackles for loss and Chance Purvis was recorded three. The Pirates also came up with a crucial fumble recovery when Jalen Price separated the ball from Smartt at the goal line and Bruce Bivens recovered.

A review to see if Smartt had broken the plane of the end zone was inconclusive and the Pirates turned away a serious threat.

Warren Saba also made a big special team contribution when he darted in to block a Cate Bailey punt, then recovered it for a touchdown and a 10-3 lead. The blocked punt marked ECU's first since Devaris Brunson blocked a Western Carolina punt in 2016 - a span of 39 games.

ECU's offense managed just 309 total yards. Sophomore quarterback Holton Ahlers absorbed repeated shots from the ODU defense and finished just eight of 21 passing for 202 yards. But he connected on a pair of early strikes for the Pirates' two biggest gainers of the year, vital to a quick start and building a lead.

Ahlers' first pass - to senior receiver Deondre Farrier - covered 53 yards and rescued ECU from what could have been a nightmarish start when Colby Gore fielded the opening kickoff and stepped out of bounds at the one. That led to a Jake Verity field goal and a 3-0 lead.

Early in the second quarter, Blake Proehl hauled in an Ahlers pass and sprinted for a 72-yard score and a 17-3 lead.

"We tried to take some shots down the field last week and they didn't work out," Houston said. "Certainly, they did tonight and that was a big factor in the ballgame because it backs everybody up off us and gave us some room to run."

With starting running back Darius Pinnix still sidelined with an injury, the Pirates relied primarily on freshman Demetrius Mauney and sophomore Trace Christian. Mauney finished with a team-high 52 yards on 10 carries, highlighted by a 21-yard run on the first play after a Cate Bailey punt backed ECU to its four-yard-line early in the second quarter.

ECU mistakes aided ODU's third-quarter surge. A muffed punt by Tyler Snead gave the Monarchs the ball at the ECU 36, then Gore was flagged for a late hit on Smartt after a six-yard run. Smartt capped off the drive two plays later with a five-yard keeper around left end to make it 17-10.

Jordan Young then picked off an Ahlers pass, setting up the Monarchs at the ECU 46. Passes of 13 and 16 yards had ODU threatening to pull even, but they had to settle for Nick Rice's 39-yard field goal.

ECU showed its new-found fortitude in the fourth quarter, responding with an eight-play, 75-yard drive to lead 24-13. Ahlers threw a 21-yard pass to Johnson, hit former teammate at D.H. Conley High School, and later converted a third down with a six-yard run. An incredible leaping catch by Proehl between two defenders along the sideline set the Pirates up at the 11.

ECU was back in business quickly after an interception by Gerard Stringer, but ODU blocked a 45-yard field goal attempt by Verity. Freshman Ja'Quan McMillian snared another interception at the ECU 20 with 5:11 to play, but ODU still had life.

On the Monarchs' next possession, Smartt teamed up with Nigel Fitzgerald for 45 yards to the ECU one, then Kesean Strong scored from there. A two-point pass made it 24-21.

With no timeouts left, ODU's only hope was to recover an onside kick, but Johnson secured it for ECU.

A celebration on the opponent's turf was on.

"There's nothing better than sitting in victory formation with the purple and gold," Houston said. "That's as good as it gets."