Who are the top "stakeholders" when it comes to getting electricity in North Carolina? Cooper Administration, Energy Policy, stakeholder
Home
Categories
Login

This isn't a trick question, no matter how baffling it may seem to the Cooper administration. It's the people of North Carolina. It's always been the people.

Electric utilities are considered one of the few "natural monopolies." For that reason, even though the North Carolina State Constitution declares monopolies "contrary to the genius of a free state and shall not be allowed," state leaders long ago found there to be an "inherent advantage" to having regulated public utilities.

Least-cost, reliable electricity at the flip of the switch: it's the law

To be clear, North Carolina law recognizes that "availability of an adequate and reliable supply of electric power" is critically important "to the people, economy and government of North Carolina." As the law puts it, "the rates, services and operations" of the utilities are all "affected with the public interest."

For that reason, state law on electric utilities expressly seeks "adequate, reliable and economical utility service to all of the citizens and residents of the State" and "the least cost mix of generation and demand-reduction measures which is achievable."

Why is least-cost, reliable electricity at the flip of the switch so important to people? Because electricity isn't a luxury purchase, it's a basic human need. It's also a foundational need for every business in the state.

What that means is that anything that would raise electricity rates higher than necessary would impose higher costs on everything and everyone in North Carolina. It would also be a painfully regressive price increase on the poor, as can be seen from this graph: 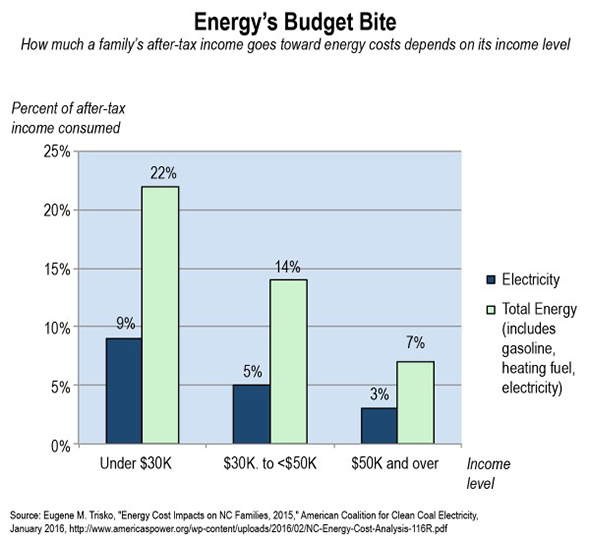 The term "stakeholders" is used in policy debates frequently. It sounds good and steeped in important involvement. It seems less detached and predatory than "interested parties." It's an accepted convention of speech.

By conventional use, it rarely denotes those who best qualify for the term. Politically speaking, the citizens themselves - though they have the most at stake - aren't thought of as stakeholders.

In Lincoln's memorable description, the American system is "Government of the people, by the people, for the people." On the other hand, stakeholders tend to be of the lobbies, by the politicians, for the special interests.

Method 1 was a series of facilitated stakeholder workshops, which were day-long events attended by 60-80 experts and key stakeholders with a vested interest in clean energy. Method 2 involved more general public outreach, achieved through regional listening sessions. These events were half-day sessions intended to educate members of the public about the CEP development process and to receive feedback and comments. Method 3 involved combining with existing venues or events to collect feedback. Method 4 was the online comment portal, where members of the public who were unable to attend any of the in-person events could respond to specific questions and submit general comments.

Basically, DEQ started with a dedicated rent-seeking fest of "experts and key stakeholders" - key! - "with a vested interest in clean energy." Then they proceeded to lecture what few people had the free time to attend a session what they should think about a state policy to force the special interests' energy choices on them. 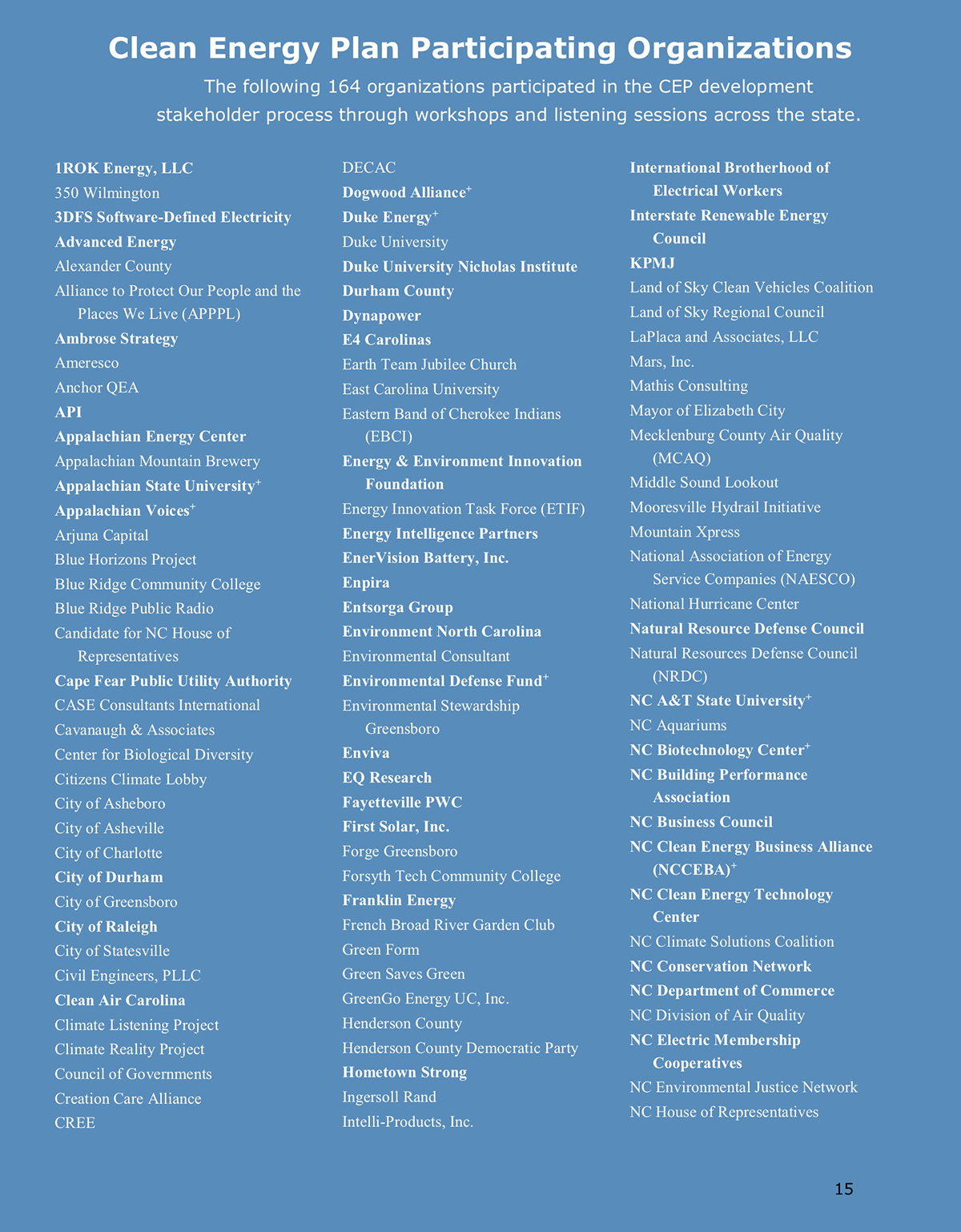 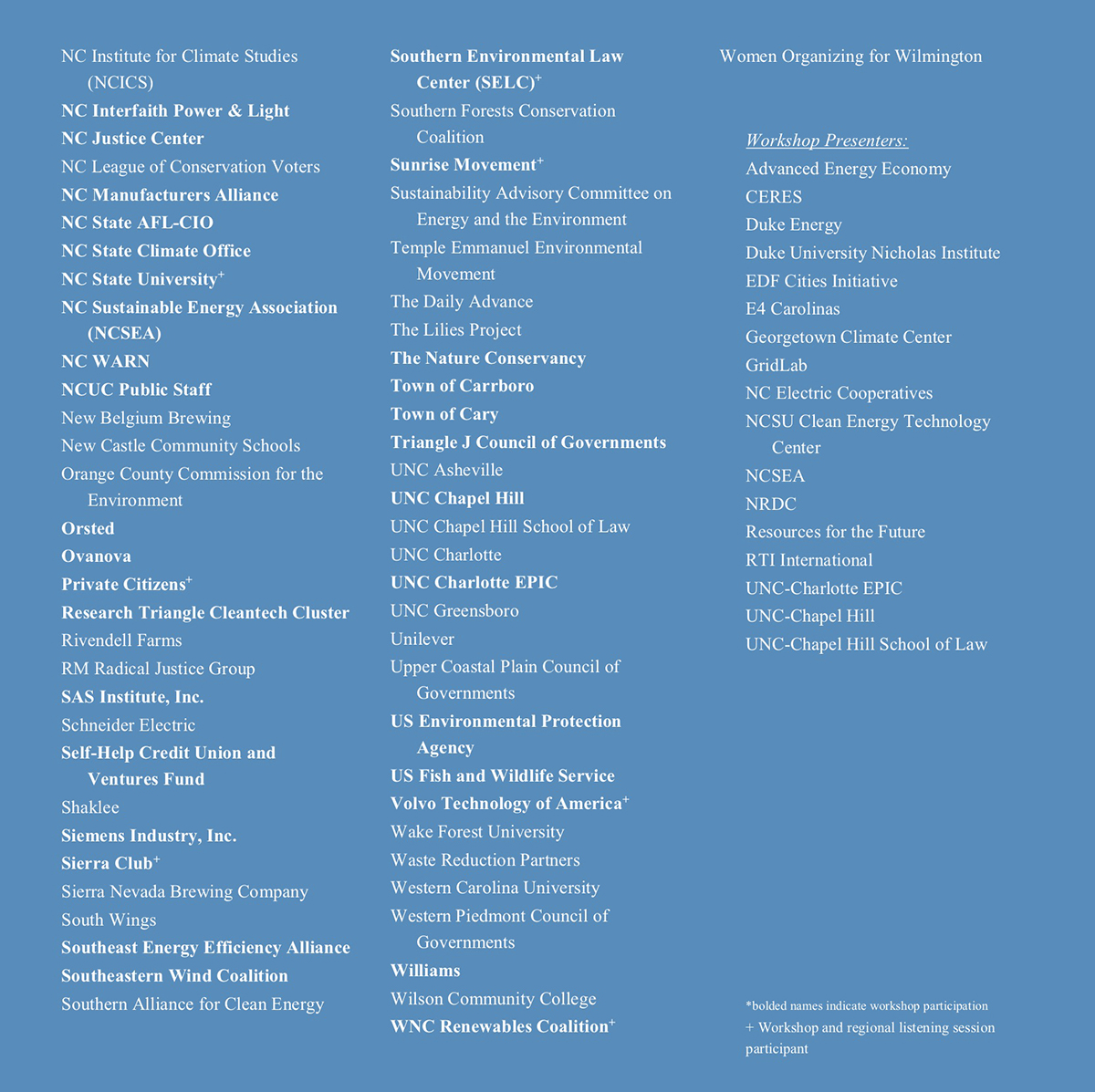 Their top interest, by far, was the broad category of "Environment & Carbon Reduction." 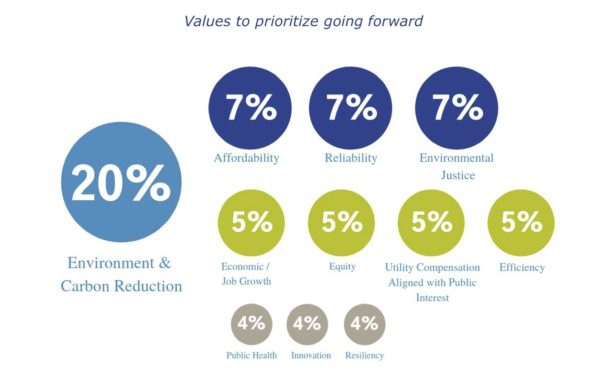 So who cares for affordable, reliable, efficient electricity? Just you, me, and the N.C. General Statutes, my friend.

Oh, wait - and the top stakeholders in electricity in North Carolina. Let's not forget them.