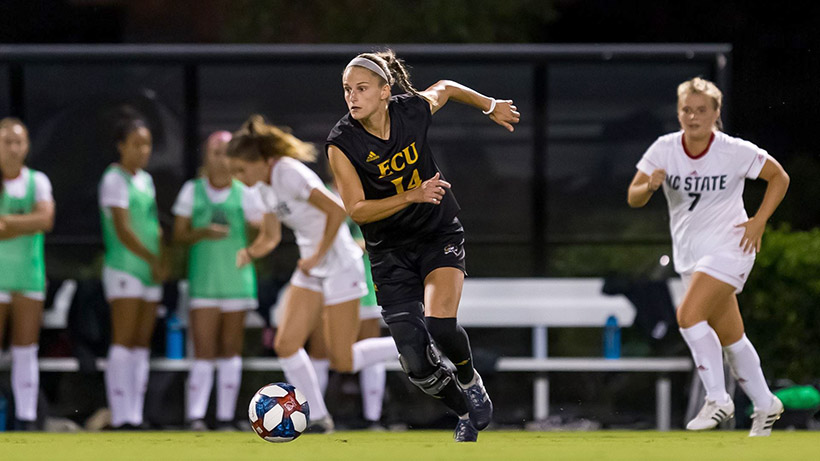 "I couldn't be more proud of the effort put forth by our group today," said head coach Jason Hamilton. "To go on the road and get a win in conference is huge. I thought we had spells in the first half where we played well, but there were times where they were the better team."

The Pirates took the lead in the 28th minute off a set piece. Daria Draovitch stepped up to take a corner kick from the left side and swung a cross into the middle of the Connecticut box. Jenna Dages jumped and directed a low header towards the far post. At first it looked like the Huskie goalkeeper had been able to dive and keep Dages' effort out of the goal, but the referee indicated the shot had crossed the goal line, setting off an ECU celebration.

At halftime, ECU led 1-0 off that lone goal, but Connecticut came out determined to find an equalizer. The Huskies took nine shots and four corners in the second 45 minutes, to just three and one respectively for the Pirates. However, ECU limited the quality of UConn's shots, as just two of those attempts were on goal.

"In the second half, I thought we showed much physicality and that's what you need to be able to hold off a team and protect a lead," Hamilton said.

The Huskies had one final chance to level the score in the 88th minute when Sophia Danyko-Kulchycky took a shot from the right wing. But Melanie Stiles made the save for ECU and the Pirates did not let Connecticut take any more shots as they closed out the win.

Connecticut finished with a 15-7 edge in shots, but had only three shots on goal while ECU had four shots hit the frame. The Huskies had a 6-3 edge in corner kicks. Melanie Stiles made three saves for ECU and Randi Palacios also had three stops for Connecticut.

The win was the first time ECU has won on the road against the Huskies and the second straight year the Pirates have topped Connecticut, after winning 2-0 at home in 2018.

"Leading up to this game, we talked about believing in ourselves and knowing we are capable of winning game," Hamilton added. "We challenged players to step up and fil the shoes of the players we are missing. It was a great team win tonight."

The Pirates will continue their road trip when they head to Temple for a Sunday match. Kickoff is scheduled for 1 p.m., in Philadelphia, Pa.