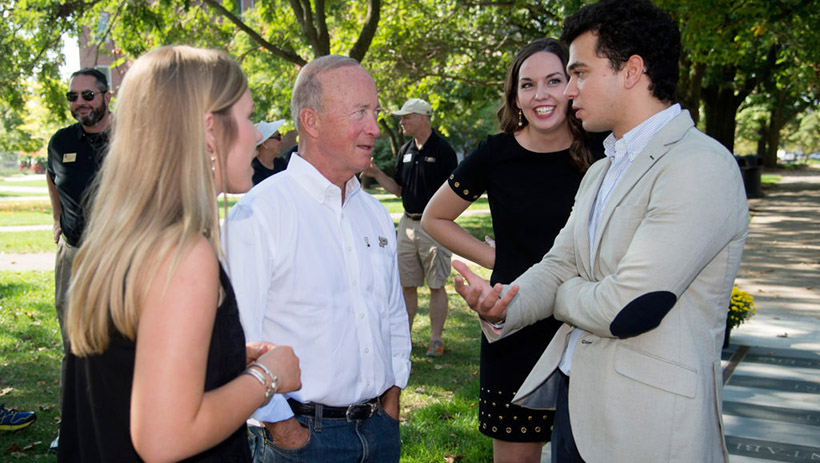 American universities are in jeopardy of becoming no better than finishing schools reserved for the rich, Mitch Daniels told an audience at the University of North Carolina-Chapel Hill.

The problems plaguing higher education come from outside but also from within, Daniels said.

"If we had set out to design a system to certainly cost too much, it would look like the one we wound up with," Daniels said.

The cost of college tuition, fees, and textbooks have skyrocketed, yet the quality of a university education hasn't necessarily improved. Students are taking on more debt, and some graduates end up back home with their parents.

State systems aren't solely responsible for the ballooning costs, though Daniels said they do play a role. Tuition for private colleges has increased, too.

"As usual, a quick cut from Occam's razor provides the easiest answer: Schools raise price because they can," Daniels said.

But higher costs don't necessarily mean better quality. Daniels said 43% of college graduates are in a job that doesn't require a degree.

Students are earning a college education, but too many are leaving college without a proper grasp of basic skills or a reliable work ethic. Grade inflation is making test scores useless. Some employers are no longer looking at college transcripts when considering whom to hire. Instead, employers often test prospects as they try to find the right fit.

Tech-savvy, online colleges are offering a degree at a fraction of the cost of traditional universities, and enrollment at brick-and-mortar campuses is under threat. Some universities may end up consolidating or closing, though most will survive and lumber on, Daniels said.

But, he asked, should they? Challenges exist within the university halls, too.

"Diversity is supreme at universities, but what about diversity of thought?" Daniels asked the audience.

Daniels said schools are depriving students of opportunities to engage opposing viewpoints. He cited a study showing about 70% of self-described conservative students feared reprisal for voicing their opinions. Some universities are leading students to believe it's acceptable to shut down certain speakers.

Notable public intellectuals, including former Secretary of State Condolezza Rice and conservative commentator George Will, have been the subject of disinvitation campaigns. On several occasions, students shouted down people - conservatives and liberals alike - who tried to speak at university events.

"If universities are willing to disgrace and embarrass themselves by creating or even encouraging trespasses of basic American freedoms, that's their problem," Daniels said. "But [as] this growing generation of little authoritarians ... are socialized to trample on those they disagree with. That's everyone's problem.

Daniels commended the UNC System for taking free speech seriously. The system has embraced a free speech standard modeled after the University of Chicago's Statement on free expression.

Challenges persist for many universities to provide affordable, quality education while also ensuring students understand civics and the principles of a free society. In the face of consolidation, schools should embrace innovation to remain relevant.

Daniels arrived at Purdue in 2013, and he soon called for a one-year timeout on tuition hikes. University officials worried enrollment would drop because parents might think something was wrong with the school, whose competitors continued to raise tuition. But, Daniels said, enrollment grew, with the fall 2019 class being one of Purdue's largest.

Purdue began offering three-year pathways for a majority of degrees, as well as income share agreements instead of private student loans. It made civics a requirement for graduation.

Daniels said that many universities, like those in the UNC system, are committed to academic excellence. They've done great things.

Swift innovation, he said, is necessary.

"Higher education won't cut it," Daniels said. "Only the highest education will do."