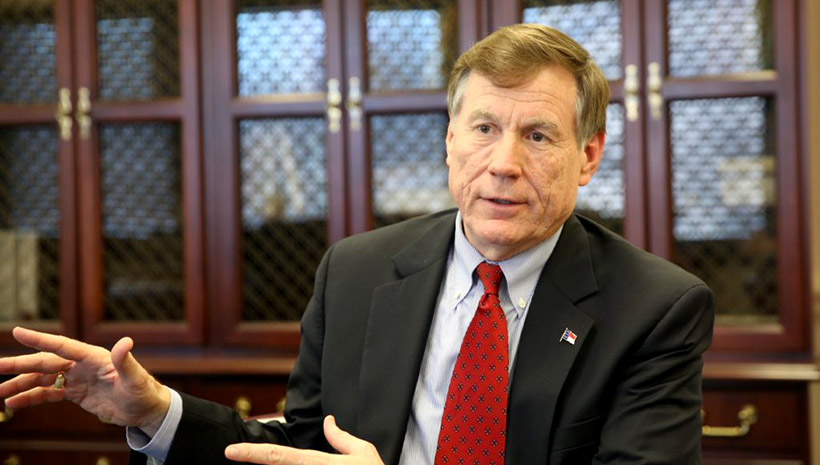 The state insurance commissioner is calling for the head of Blue Cross N.C. to resign.

Blue Cross N.C. CEO Patrick Conway faces charges of drunken driving and misdemeanor child abuse after he swerved out of his lane and crashed into a truck in June. His two young daughters were in the back of the car, according to a police report.

The report describes Conway as driving erratically on Interstate 85 for more than 90 miles. Conway refused to take a breathalyzer test, but the report says Conway's eyes were "bloodshot, red and glassy." The report said Conway cursed at officers when taken to jail and that he was "absolutely belligerent."

"I am today asking for the resignation of Dr. Conway," State Insurance Commissioner Mike Causey said in a news conference Wednesday, Sept. 25.

"He put a big dent in the reputation of a good company. There is no path forward for this office to have a trusting, confident, and reliable working relationship with the CEO of BCBS."

Conway is expected to appear in court Oct. 8. He took a temporary leave after the incident, during which he was assessed for substance-abuse issues and completed a 30-day inpatient treatment program.

"He's deeply ashamed and embarrassed about the events of June 22nd," a statement issued by Conway's lawyer, Thomas Walker, said. "Particularly for the pain he has caused his family and his co-workers. He knows his conduct was unacceptable and not consistent with who he is as a person."

Causey said Conway's behavior during the arrest "sickens" him.

"The board misrepresented the actual arrest to the Department of Insurance, leading me to believe it was a routine arrest. But this arrest ... was anything but routine," Causey said. "As commissioner, I cannot move forward with any type of trust and confidence with this CEO."

Conway had called Thursday night to apologize. According to Causey's account of the conversation, Conway said it had been a difficult time for him, and seemed genuinely sorry. At the time, Causey accepted his apologies.

But as more details of the arrest broke, Causey said he "cannot accept the coverup of the facts." He has accused the board of protecting Conway and concealing information about the arrest for months.

Blue Cross N.C. has stood behind Conway so far.

Frank Holding, chairman of the company's board of directors, rejected Causey's initial call for the company to place Conway on administrative leave. Holding wrote Causey on Monday, saying the board thinks it has done enough to "fulfill its fiduciary obligations to Blue Cross N.C."