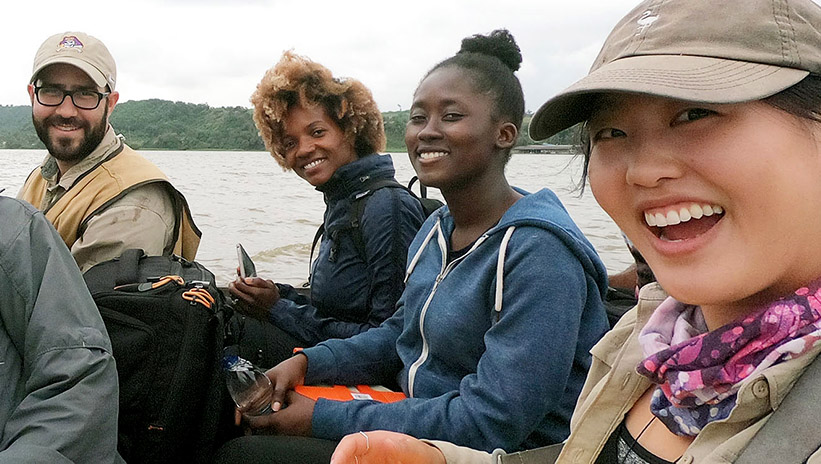 What does West Africa's coastline have in common with eastern North Carolina's Outer Banks?

Lagomasino, who began his first semester in ECU's Department of Coastal Studies in August, visited West Africa last month as part of a research study funded by NASA. The 2007 ECU graduate uses satellite images and remote airborne sensors to study coastal ecosystems around the world, including the Outer Banks and tropical coastlines like those in West Africa and India.

What he hopes to understand is how and why coastline ecosystems are affected by human interaction, including the effects of commodity development, tourism growth and the loss of ecosystem space due to natural and man-made environmental factors. The three-year project entered its second year this summer with Lagomasino traveling across the Atlantic Ocean to the Ivory Coast.

"A lot of people don't know it, but West Africa's coastal ecosystem is very similar to eastern North Carolina," Lagomasino said. "They have barrier islands, large lagoons and a lot of people and tourism along the coastline. They're dealing with a lot of the same problems we're dealing with along our coastline, including erosion, saltwater intrusion and loss of land due to development. I want to explore how international regions are handling these challenges so that we can possibly bring those interventions back to North Carolina." 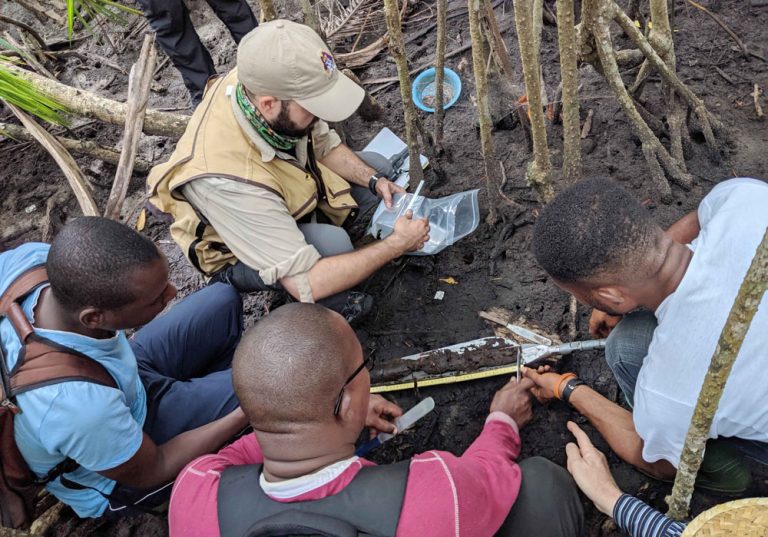 Lagomasino and a team of researchers gather soil samples in a mangrove forest. The samples will be tested to determine how much carbon the soil is storing.
In the past, Lagomasino's research at NASA's Goddard Space Flight Center used satellite images to explore marshes, beach dunes, maritime forests and inner banks agriculture. Making the trip to West Africa, however, allowed him to see the effects of an ever-changing coastline in person, giving him a different perspective to bring back to the United States.

"We see the day-to-day transformations in our neighborhoods and cities, but we don't always see the large scale changes to our environment," Lagomasino said. "My work uses satellite data to show visual change on a grand scale. When you see how our forests have been depleted or how much beach we've lost due to erosion, it puts things into a different perspective."

Lagomasino's West African research study specifically examines maritime environments that store large amounts of carbon, known as "blue carbon" ecosystems. These ecosystems give the region the most "bang for its buck" in carbon storage, keeping carbon dioxide out of the atmosphere and other nutrients, like nitrogen and phosphorus, from rising to dangerous levels in water systems.

"A lot of the change we see in these ecosystems tends to be human-driven," he said. "Forests are being converted into commodity-type land uses like shrimp and rice farms in Indonesia; barrier islands are being renourished on the beach side, but not the inlet side, which can have the unintended consequence of leaving these regions more susceptible to high tides and storm surge. There can be dramatic effects on our ecosystem at a global level when we do not study the effects and results of the changes we make on our coastlines."

What excites Lagomasino the most about joining the Department of Coastal Studies is the interdisciplinary nature of ECU's Outer Banks Campus and bringing students into his research.

"The new department drew me back to ECU," Lagomasino said. "The interdisciplinary approach of putting researchers with multiple backgrounds together to address coastal issues is exciting. I can work alongside an economist one day and an anthropologist the next. There are a bunch of different ways to solve the same problem, so working with a diverse team here, as well as international researchers like those in West Africa, gives our team a great chance to get better answers to building a more resilient coastline.

"I'm also really looking forward to working with students. I can't wait to provide a hands-on experience. It won't just be studying, but actually getting them out in the field, collecting and analyzing data, and communicating that data to the public. We're ready to do some innovative research here in the Outer Banks."

Learn more about Lagomasino and ECU's Department of Coastal Studies by visiting the department online.