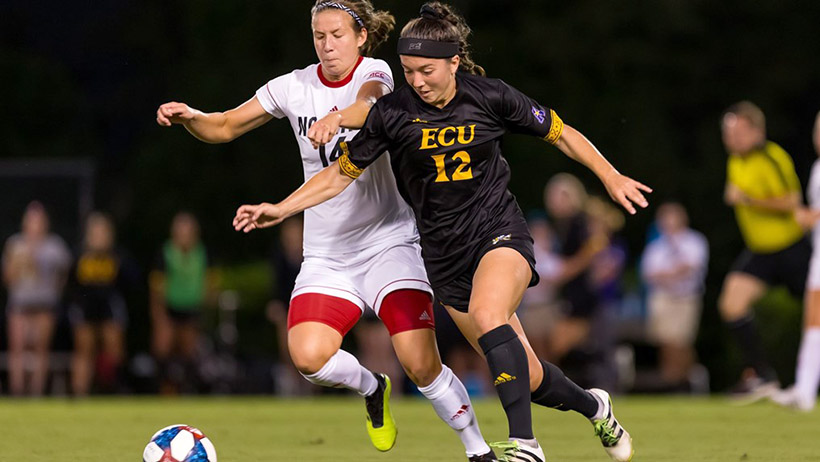 GREENVILLE, N.C.     It is the start of American Athletic Conference play for the ECU soccer team as the Pirates head to Connecticut for a Thursday night matchup.

"We've talked a lot about what we need to do to be successful in the conference this year," said head coach Jason Hamilton. "Being able to win on the road and being good on Thursdays have been two of the strongest messages. With five of the nine conference games being away, we have to be able to get points on the road."

ECU (3-5-1) will be trying to snap a two-game losing streak. The Pirates most recently dropped a 1-0 contest at UNCG. Tori Riggs leads the team with six points on two goals and two assists while Jenna Dages and Cashlin Copley each have two goals and one helper. In total, eight different Pirates have scored while 13 have either a goal or an assist. Melanie Stiles has started all nine games in goal for ECU and has racked up 36 saves and a .720 save percentage.

Connecticut (4-3-1) pushed its record above .500 thanks to a 2-1 overtime win at UMass Lowell. The Huskies topped the River Hawks thanks to goal from Kess Elmore that was scored from just inside the halfway line. Elmore leads the team with four goals and three assists for 11 points, placing her in a tie for fourth in the AAC in points. Elmore is also one of eight players in the conference with multiple game-winning goals. In the net, Randi Palacios has played every minute for Connecticut and is second in the league with 39 saves to go with a .780 save percentage.

"With every opponent we play in the AAC, we need to be ready for a battle and that is what we expect this weekend," Hamilton said. "Connecticut has been good at their place and we have to find a way to be better."

The series between the two schools has historically been dominated by Connecticut, with the Huskies winning five of the six meetings. However, ECU did win last season, taking a 2-0 home victory thanks to a game-winning goal from Cashlin Copley. The Pirates are 0-2-0 when playing at Connecticut, losing 2-1 in 2017 and 3-0 in 2015. ECU has lost its past three conference openers, with the last win coming against Houston in 2015. The last time ECU opened league play against Connecticut was in 2014 when the Huskies won 2-1 in overtime.

Kickoff is scheduled for 7 p.m., at Dillon Stadium in Hartford, Conn. Fans can stream the match HERE or follow the live stats HERE.