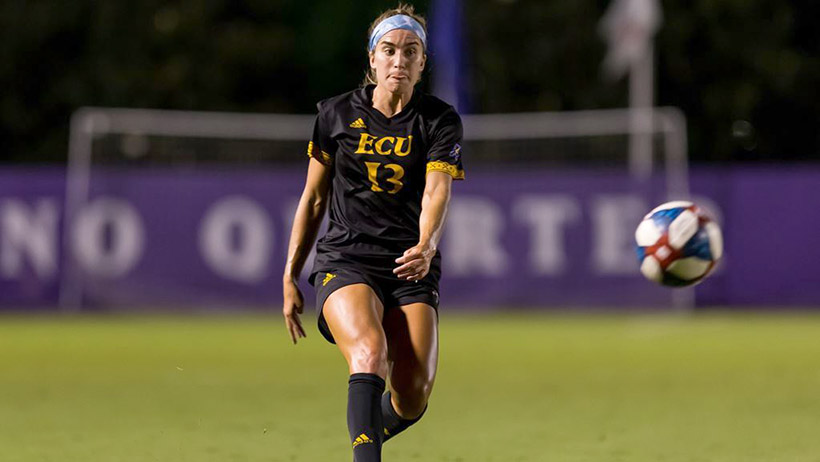 GREENSBORO, N.C.     A goal off a corner kick was the difference as the ECU soccer team lost 1-0 at UNC Greensboro on Sunday night.

"Obviously not the result that we wanted to get," said head coach Jason Hamilton. "I thought we came out and started the game and we had the ball the entire time, but just did not have any quality in front of the goal. We settled on some of our services and shots that were not dangerous."

ECU finishes the non-conference portion of its schedule with a 3-5-1 record while UNCG wins its third straight match and is now 3-5-1 as well.

The Pirates were the aggressor in the early going, taking the game's first five shots, including Daria Draovitch forcing UNCG goalkeeper Abby Buchholz into a save. But ECU took just one shot the rest of the half while the Spartans began to grab more control of the proceedings. At the halftime break, the score remained deadlocked at 0-0.

The second half started like the inverse of the first, with UNCG pushing forward. The Spartans took five shots in the first seven minutes of the second period, culminating in an effort by Cienna Rideout that ECU goalkeeper Melanie Stiles was forced to parry away. On the ensuing corner kick, the first of the game for UNCG, Gabi Santora floated a cross to the back post where Kayla Campbell was waiting to smash home.

After Campbell's goal, ECU still had nearly 37 minutes left to draw level. But the Pirates struggled to turn their possession into dangerous chances. The best chance of the remaining time again went to the Spartans, with Stiles making another diving stop in the 77th minute to keep the deficit at one. ECU could not capitalize on that save though, with the Pirates taking just four shots in the second 45 minutes, none of which were on goal.

"The positive thing to take away is what these young ladies are doing right now," Hamilton said. "Some of them are having to play through injuries that, on most years, would have put those players out. But with the number of players who are out completely, we are having to play them."

UNCG finished with a 17-10 advantage in shots and a 4-2 edge in corner kicks. Stiles made five saves for the Pirates while Buchholz made the one stop for the Spartans.

"We have three days to take care of their bodies and get ready to battle in the conference," added Hamilton.

The Pirates will open conference play on Thursday evening with a road matchup at Connecticut. Kickoff is scheduled for 7 p.m., in Hartford, Conn.