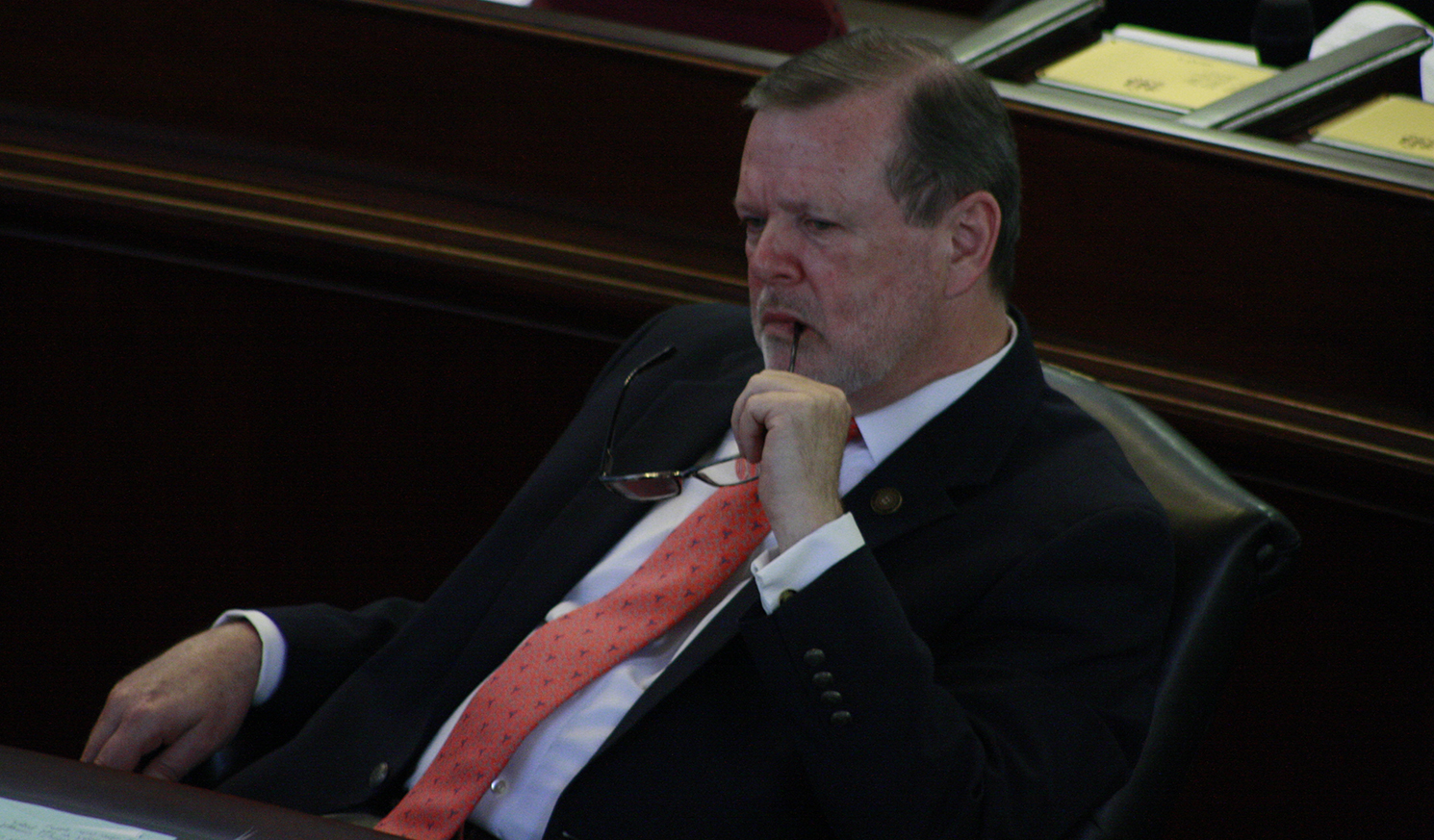 
In June, the Republican-dominated General Assembly passed a state budget that included pay increases for our public school teachers and for non-certified school personnel, pay increases for teachers in the state community college system, pay increases in general for state employees, pay increases for state highway patrol, ample funding for our transportation system and for disaster relief, and changes to our state tax laws. Republicans were proud of the promises made to the people of our state and proud that they were, for the most part, able to do the right thing without having to raise the budget to any significant degree or to increase state funding. Refer to sections (a) thru (f) below, noting the horrendous provision included to cater to Democrats in section (b).

And so, the question that remained this summer was whether Republicans would be able to find a way to override the Governor's veto and to make good on those promises. Would they be able to wrangle enough votes from Democratic lawmakers to reach the magic number of 3/5 of a majority (even though it seemed they were far from realizing that option)? Would they be able to work with Democrats to come up with a compromise that Governor Cooper would approve of (including Medicaid expansion, of course). Even though Republicans promised they would never give in on such a fundamentally unconservative issue. Would a different opportunity present itself (such as a legislative session where limited numbers of Democrats fail to show up)?

On June 27, the NC Senate passed House Bill 699 (HB-699), also referred to as the "2019 Appropriations Act" or more commonly, the "Budget Bill," by a vote of 33-15. The bill then went to the state house where it passed by a vote of 64-49. The Budget Bill was, by almost all accounts, an excellent (but not perfect) budget proposal did not increase the state debt and which included pay increases and improved benefits to certain state workers.

(b) Instructed that $14 billion be used in the first year and $14.3 billion in the second year to fund education related programs throughout the state. Laid out in the education section of the budget, teachers, assistant principals, and school principals would see salary increases at an average rate of 4.6%, 6.3%, and 10% respectively. An additional $30 million in FY 2019-20 and $53.2 million the following year would be used to fund five School Safety Grants: one for school resource officers, services for students in crisis, school safety training, safety equipment in schools, and additional school mental health support personnel. The budget would eliminate the current classroom and teacher supply fund and replace it with a $15 million appropriation annually to establish the Teacher Directed Classroom Supplies Allotment that would allow teachers to use an app to purchase textbooks and other supplies specifically for their classrooms. Sadly and very disappointingly, a provision (a Democratic initiative) was included that would lower the grading scale to be used in the state's public school system to measure school performance, changing the weighting of the school achievement component to 51% and the school growth component to 49%. It substitutes the 10-point grading scale (with a failing grade of 64) with a 15-point grading scale (with a failing grade of 49). Starting this school year, it will take very little effort for a student to meet the state's new "competency" criteria.

(d) Medicaid Transformation projects will receive a nonrecurring appropriation of $232.9 million in FY 2019-20 and $198.4 million in 2020-21 in order to support the efforts of transitioning the state to a managed care system. Additionally, the Health and Human Services portion of the budget allocates $150.2 million and $11.4 million in respective years of the biennium to pay for the runout of claims for individuals transitioning to managed care.

(e) The Department of Transportation will receive $98 million in additional funds for the contact resurfacing of roads and other general maintenance projects. The budget also allocates approximately $58 million in funding for Rail Infrastructure efforts and includes provisions to remove restrictions specific to light rail projects. $15 million recurring dollars from the State Capital and Infrastructure Fund will be used for the GREAT grant program to help bring broadband providers to rural areas of the state.

(f) The budget contains several provisions to change North Carolina's tax laws. Multistate corporations would be required to calculate their sales based on the percentage of their income that is due to products and services provided throughout the state. Tax and regulatory relief would also be granted to out-of-state businesses conducting disaster related work in North Carolina after a natural disaster, such as Hurricane Florence.

On June 28, Governor Roy Cooper vetoed the budget. He vetoed the budget for one reason and one reason only - to hold salary increases hostage in order to coerce the General Assembly into passing an acceptable Medicaid Expansion bill. He was intent on having Medicaid available for all those who needed it in North Carolina, including illegal aliens. It was a sickening exercise of political power, of partisan politics, of executive bullying, and of political extortion.

No one can accuse a Republican lawmaker of not being tireless and dedicated to their position.

Note, though that none of the piecemeal reports or bills provided for a pay increase for public school teachers. I believe this was intentional. Although Republicans (not Democrats) had already given teachers six consecutive salary increases, teachers (organized by their so-called "union") have continued to protest at the General Assembly demanding higher and higher pay. They never thank Republicans (indeed, they don't even know what Republicans have done on their behalf) yet when Democrats were in power and never ever increased their pay, the same teachers never made a stink. I believe the Republicans wanted teachers to know that it was Governor Cooper alone who prevented them from enjoying a pay increase and didn't want to help him escape the consequences of his despicable veto. I believe they wanted Governor Cooper to feel the heat from teachers - hoping, of course, that teachers would finally travel to Raleigh to condemn a Democrat and to protest at the Governor's mansion.

That didn't happen... No surprise there.

On September 11. Republicans in the General Assembly finally were able to make good on the promises they made in the 2019-21 appropriations bill. They were able to seize on an opportunity in the state house to take a vote to override Cooper's veto. And exactly what was that "opportunity"? As Republicans noticed when they walked into the house chamber that morning, there were hardly any Democrats present, even though they had an obligation to be present for a scheduled vote. In fact, there were only 15 Democrats present at the time the session commenced.

But was their any duplicity or scheming involved in the override vote? Absolutely not. In fact, Republicans refer to their decision to take the override vote as an "opportunity," while Democrats refer to it as "villainous" and "unfair."

Here is what happened:

On September 10, Rep. David Lewis (R-Harnett county) was standing in for House Speaker Tim Moore, who was not in Raleigh. On the house floor that day, he read two bills into the record which would be considered by the body the following day - at 8:30 am. In other words, two bills were read into the calendar. Those bills were Senate Bill 118 (S.118), a prison safety bill, and Senate Bill 429 (S.429), a disaster recovery bill. At every legislative session, any bill that is remaining on the calendar (that is, still waiting for some action to be taken) can be taken up, depending on the discretion of the speaker or acting speaker. In fact, notice of the veto override was properly noticed and published on the House calendar, as it has been for nearly 2 months. Every legislator knew this. In fact, Speaker Moore had reminded members of the House repeatedly that whenever he saw that we had the votes to effect the override, he would call for the vote.

To emphasize, after Chairman Lewis announced his intention to take up the two bills, he announced a start time of 8:30 am for Wednesday for the house session. Lewis, House Speaker Tim Moore (who would be returning to the legislature the following day), present members of the House, and staff, were all planning to hold recorded votes on bills on the published calendar for Wednesday's morning session.

The Minority Leader, Rep. Darren Jackson, asked if the vote on those two bills could be delayed until Wednesday afternoon to give Democrats a chance to consider them in caucus. (As you'll note later, this was most likely a ruse to cover up what Democrats already had planned for the morning.....) Acting Speaker Lewis agreed to allow the delay and said there would be no votes on those two bills until Wednesday afternoon.

This is a very important detail to grasp.

Rep. Lewis told Rep. Jackson he would delay the vote on S.118 and S.429 until the afternoon but he did NOT cancel the morning house session. He had made clear the day before that they would be voting on bills (and not just those two bills). Jackson apparently had mistaken what Lewis said to conclude that there would be no voting at all in the morning session. That begs the question then - Why even have the session? Why didn't Speaker Lewis cancel it? If the session wasn't cancelled, then there was clearly house business to address, including bills to be voted on and possibly, yes possibly, some calendar bills to re-visit.

Every night, the General Assembly (GA) publishes its calendar for consideration the following day. So, for those legislators who just happened to be absent and did not physically hear the bills to be addressed, they are able to receive proper notice by going to the GA calendar. And so, by the end of the day on September 10, the GA calendar listed the bills (S.118 and S.429) that it would take up the next day. Also on the calendar were those additional bills still waiting for action. Representatives who checked with the calendar would have also seen that a morning session was still scheduled, and it was to begin at 8:30 am.

As Republicans entered the house chamber on the morning of Wednesday the 11th, they noticed that there were barely any Democrats present. In fact, they noticed only 9 Democrats. At that point there were only 51 Republicans. This was a concern since legislators need a quorum to conduct business, and that quorum is 61 members. It was possible that the session would be cancelled. As both Representatives Keith Kidwell and Larry Pittman commented: "None of us, including the Speaker, had any idea when we came in for that 8:30 session on Wednesday morning, that the opportunity to override the budget veto would occur that morning." They knew that only 51 of their members were present (out of a total of 65), and only a handful of Democrats were there, so there was no way they could have planned to vote on the override with less than 61 of House members present.