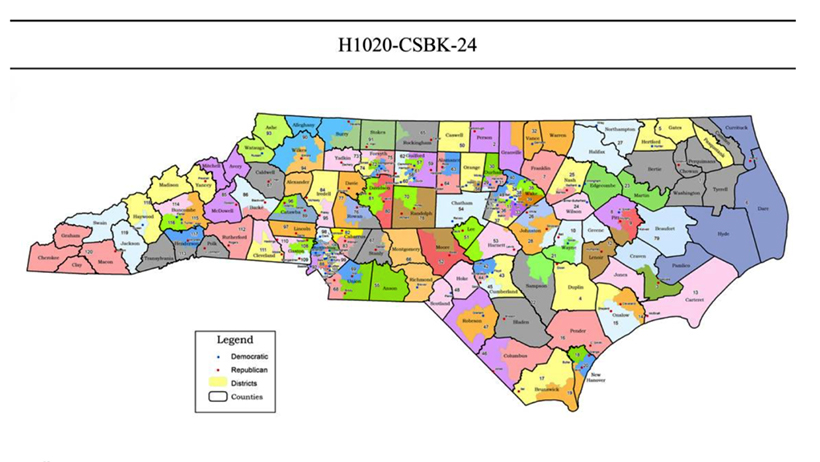 The General Assembly's new election maps, as they are now, would largely even the playing field for 2020, experts say.

Both chambers passed the others' maps Tuesday, Sept. 17. Redistricting analysts have since evaluated the maps through a relatively new technology, Planscore, which attempts to measure partisan favorability. The metric shows a decrease in the overall partisan skew of the new maps compared with the old ones, but it fails to account for other factors - such as residential geography and candidate likeability.

In the end, several analysts agree the resulting maps are about as fair as they could have been, given the time constraints and complexity involved. Any remaining partisan bias likely results from two other factors. First, geographical districts generally favor Republicans, who are dispersed more evenly than Democrats throughout the state. Second, many district lines were redrawn to protect incumbents.

Defendants in the Common Cause v. Lewis lawsuit will have until Sept. 23 to file all map-making materials from the past two weeks. The court also said in its notice that anyone who objects to the maps must file a brief by Sept. 27. The State Board of Elections will inform the court by Oct. 4 of any administrative limitations relating to the 2020 primary elections, since candidates will have to file for primary races in December.

Though legislators weren't allowed to use partisan data when drawing the maps, analysts can use it to evaluate the maps after-the-fact.

Planscore calculates an "efficiency gap," or the percentage of votes that would be wasted by packing more voters than necessary into one district and not enough into another. In other words, when one party has a higher efficiency, it's wasting fewer votes than the other party. Comparing the 2016 election maps with the current ones, the Republican efficiency gap would tighten from 9% to 5% in the House, and from 11% to 3% in the Senate.

Planscore calculated a similar drop in favorability toward Republicans by calculating "partisan bias," or the number of extra seats one party would be able to win in a hypothetical, perfectly tied election. Comparing 2016 and current maps, the number of extra Republican seats dropped from 7% to 3% in the House; from 6% to 2% in the Senate.

Michael Bitzer, professor of politics and history at Catawba College, said residential geography plays a "huge role" and might be part of the reason Planscore's maps still tilt in favor of Republicans. Democrats tend to cluster in cities while Republicans are more evenly distributed, which leads to a natural "gerrymander," if you will, against Democrats.

The problem with the "efficiency gap" metric is that it operates as though elections should be based on proportional, and not geographical, representation, said Mitch Kokai, senior political analyst for the John Locke Foundation. If elections were proportional, then you would simply count the votes and assign a certain number of seats to a party depending on how many votes they received.

But that's not the way elections work when they're based on geography, with one member representing each district. With geographical representation, if every district were divided among the two major parties, 51% to 49% in favor of a single party, that party would win every election in the state. With proportional representation, 51% of the votes means roughly 51% of the seats in the legislative body.

The "efficiency gap" metric also completely ignores the fact voters don't always choose their candidates based on political party. A candidate from the district's majority party who's unlikeable, or who has ethical or legal problems, still could lose a competitive race. An incumbent with strong name recognition could win in a district that looks unfavorable on paper.

Such metrics also fail to account for so-called "wave" elections, as the one in 2010. Republicans at the time swept Democrats from their General Assembly majorities, even though GOP candidates ran in districts that were gerrymandered to favor Democrats, Kokai said.

"That doesn't make the metric necessarily inaccurate, but it also doesn't make it useful as far as challenging the constitutionality of election districts," Kokai said.

Planscore isn't the only way to evaluate the new maps. Comparing them with plaintiff expert Jowei Chen's data yields slightly different results, and shows favorability toward Democrats, per an analysis from University of Chicago Law Professor Nicholas Stephanopoulos.

Stephanopoulos notes that placing the new maps alongside Chen's doesn't produce a "perfect apples-to-apples comparison." Both use the same 48% Democratic vote-share, but Chen combined data from 10 statewide elections between 2010 and 2016, while Planscore used only 2016 data.

Bitzer noted that it's better to use an aggregation of various years of data, if possible, to smooth out election anomalies. Calculations based off only one election year, like Planscore's, could have skewed results.

Nevertheless, every data set should be taken with a grain of salt.

"I don't think anyone should take my data or anyone else's and say, 'This is how elections will pan out in 2020,'" Bitzer said.

Despite bipartisan and occasionally unanimous committee votes last week and praise for the fairness of the mapmaking process from both sides of the aisle, some Democrats renewed concerns that members put too much effort into protecting incumbents and did not allow enough time for public comment. The Senate approved its own map with a bipartisan 38-9 vote, including 13 Democratic "yes" votes. Otherwise, votes on the maps tended to fall along party lines.

In its ruling, the court allowed for "reasonable" attempts to protect incumbents, that is, to draw lines to prevent incumbents from running against each other in the next election and decreasing their chances of winning.

"Operating in that kind of an environment, people will contend some things should have been done differently," Bitzer said. "I don't think they were necessarily big issues that would call into question the process."

"Given the time constraints - that is, a two-week window - the maps were probably as inclusive and transparent as they could have been," he said. "We're having partisans draw the maps, with Democrats voting against both the House and Senate maps. That would suggest it's not perfect, but it's better than it was."