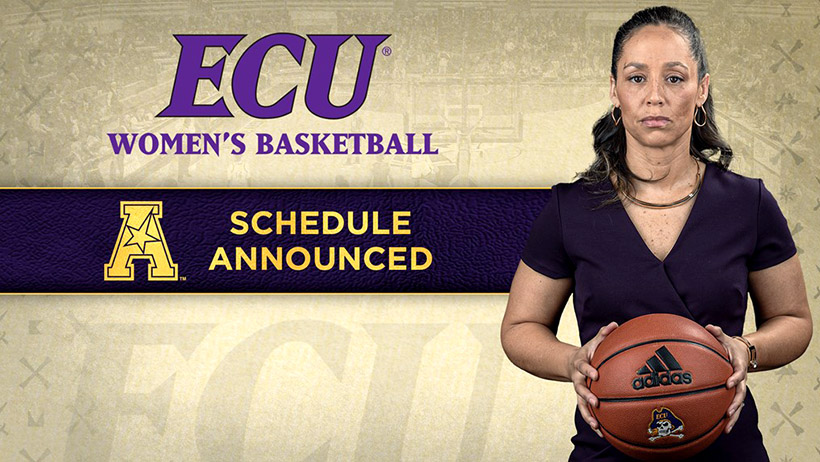 GREENVILLE, N.C. — The 2019-20 ECU women's basketball schedule was officially announced on Wednesday as the American Athletic Conference released the schedules for all 12 member institutions. The Pirates will be guided through its slate by first-year head coach Kim McNeill.

ECU will have a 16-game conference schedule with home-and-home series against SMU, Wichita State, Houston, Tulsa and Memphis. Connecticut, Temple and Tulane will all play in Minges Coliseum this season while ECU will travel to UCF, USF and Cincinnati.

The Pirates open the conference schedule with a road matchup at UCF (Jan. 5) on CBS Sports Network before returning home for contests against SMU (Jan. 8) and Wichita State (Jan. 12). The American Digital Network will air the contest against the Shockers. ECU then takes a road trip to Houston (Jan. 19) and Tulsa (Jan. 21) with the game at the Golden Hurricane airing on ESPN3.

Connecticut will come to Minges Coliseum for the final time as a member of the AAC on Jan. 25, a contest that will air on SNY and ESPN3. January comes to a close with a home matchup against Memphis (Jan. 28).

February gets started with a weekend trip to Wichita State (Feb. 1). A return matchup against Houston (Feb. 8) leads into a two-game swing at SMU (Feb. 11 on ESPN3) and Memphis (Feb. 15).

ECU will host Tulsa (Feb. 19) and Temple (Feb. 22) before heading to USF (Feb. 25) for a game on the American Digital Network. The Pirates will celebrate Senior Night on Feb. 29 with a matchup against Tulane in Minges Coliseum before the regular season comes to a close on March 2 at Cincinnati.

The American Basketball Championship will be held at the Mohegan Sun Arena in Uncasville, Conn., from March 6-9.

ECU previously announced its non-conference slate, which includes six home games. The times and dates for all of those games can be found HERE.

Season tickets for the 2019-20 campaign are currently on-sale through the ECU Online Ticket Center and can also be purchased by calling the ECU Athletics Ticket Office at 1-800-DIAL-ECU (342-5328).