Writing this column reminded me of all those back to school papers I produced on how I spent my summer Camp Flashback, Lord Banjo
Home
Categories
Login

Summer fun with the dog

Login to Send a Private Message to Kathy Manos Penn

Kathy Manos Penn with Lord Banjo
Writing this column reminded me of all those back to school papers I produced on how I spent my summer. They might have been very different if I'd had Lord Banjo as my constant companion. This summer was all about Lord Banjo's activities-some fun and some not so much. We kicked off in late June with weekly appearances at Camp Flashback, hosted at a local farmhouse. There the kids did old-timey things like making butter, sewing, and weaving. They also got to meet goats and-best of all-Banjo dressed in his royal purple robe.

We two visited for an hour each week. I told them how Banjo came to write his book, "Lord Banjo the Royal Pooch," and then they drew numbers to see who'd get to wear a costume and read a selection from his masterpiece. They chose from a royal robe, several crowns, and a pawprint scarf and loved dressing up.

I found it funny that they all wanted to read aloud, but those who weren't reading never seemed to quiet down to listen. Instead, they sat with Banjo in their midst and chattered and hugged him. He may have been the happiest camper

That enchanting routine was cut short when my boy needed minor surgery to remove a lump on his back leg. It was no big deal, not life-threatening, but he was miserable. He wore the cone of shame for close to four weeks. Yes, you read right, four weeks-one week prior to surgery because he couldn't quit chewing on his leg, and then three weeks after that. 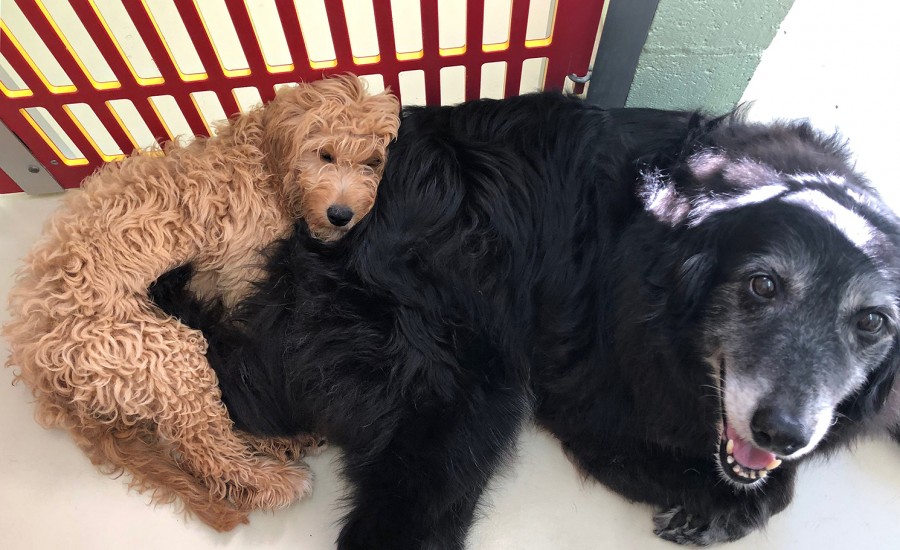 The cone was so big, he couldn't walk through doorways without hitting the frame and he constantly bumped into furniture and people. It was during this horrific experience that he began wandering downstairs to the kitchen in the middle of the night where he'd bark until I went to get him and escort him back upstairs. Some nights, he did this four times.

Call it what you will-doggie dementia or sundowner's syndrome. He's on new pills, new food, and CBD oil in the hopes he'll get over it. I suddenly had the brilliant idea of locking him in our bedroom at night, and that seems to be doing the trick. Some nights, he doesn't bark at all and when he does, I just holler, "Shush, Banjo," instead of having to go downstairs to get him.

His nighttime antics meant we couldn't take him on our annual Labor Day trip to the North Carolina mountains with friends. Everyone likes Banjo, but we couldn't expect them to put up with his nocturnal barking so we checked him into The Ark Pet Spa & Hotel.

Normally, he keeps to himself and is aloof when it comes to the other hotel guests, but not this time. Harper, a Goldendoodle puppy, wanted to be his friend. The little guy started snuggling with him, climbing on his hindquarters and laying his little head on Banjo's back. The pictures of Harper snoozing on top of Banjo were priceless.

My sister says this means Banjo needs a puppy of his own. We, his pet parents, say he'll have to make do with Puddin', his feline sister, as his only four-legged companion. I keep reminding him to look on the bright side-the cone of shame has been retired and he gets to sleep the entire night in the master bedroom. What more could a boy ask for?

Kathy is a Georgia resident. Find her books "The Ink Penn: Celebrating the Magic in the Everyday" and "Lord Banjo the Royal Pooch" on Amazon. Contact her at inkpenn119@gmail.com, and follow her on Facebook, www.facebook.com/KathyManosPennAuthor/.