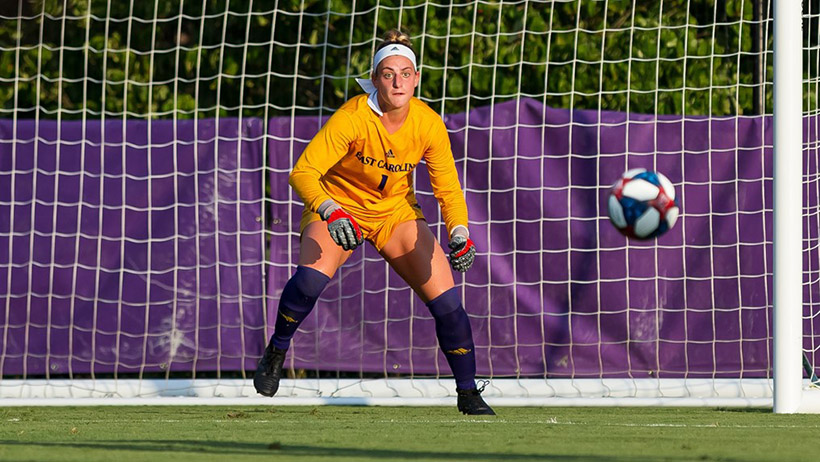 "NC State will be a big challenge for us, but our ladies are excited for the opportunity," said head coach Jason Hamilton. "We played them very tough last year which gives us confidence, but on the other side, it will have them coming out with something to prove."

ECU (3-3-1) will be riding the momentum from a hard-fought 1-0 road win against Charlotte. Cashlin Copley scored off assists from Tori Riggs and Daria Draovitch and then a tight Pirate defense made that stand up as the game-winner. Melanie Stiles made four saves to clinch ECU's third shutout of the season, she now has 23 saves on the season and a .742 save percentage. Riggs leads the Pirates in scoring, with two goals and two assists while Copley has two goals and one helper. Eight Pirates have scored at least one goal and 13 have either a goal or an assist.

NC State has had an up and down season so far, with the Wolfpack record standing at 4-3-0. The Wolfpack is coming off a 3-1 home win over Furman. They also have a 3-1 road win over then-No. 7 Georgetown under their belts. Tziarra King leads the team in scoring, with five goals and an assist, including two game-winning goals. King has enjoyed success against the Pirates, having scored three goals in three matchups. In goal, Jessica Berlin has started all seven games and has made 19 saves with a 0.91 goals against average.

"They are a very technical group and like to keep possession," Hamilton said. "We have to keep the ball in this game and not just allow them to dictate the flow."

The series between the two schools has been even, with each team's record set at 3-3-2. However, the Wolfpack has had the edge recently, winning two of the past three meetings. Last season, ECU traveled west to Raleigh and left with a 1-1 tie. Morgan Dewey grabbed an assist in that game for the Pirates. Wednesday's matchup will be the first time NC State has traveled to Greenville since 2016 and just the fourth time in the series. The Pirates are 2-1-0 at home against the Wolfpack.

"We are excited to be back at Johnson Stadium and in front of Pirate Nation," added Hamilton. "We know that our fans show up big for this rivalry in all sports and we are hoping to see a full crowd out there for this game."

Kickoff is scheduled for 7 p.m., inside Johnson Stadium. Fans can stream the match HERE or follow the live stats HERE.