While most taxpayers will be paying attention to the performance of schools in their area, I will focus on statewide outcomes and trends.

North Carolina public schools measure student performance on state tests using two primary measures: proficiency and growth. While proficiency is determined by the number of questions answered correctly, growth captures student performance relative to their scores on previous tests. Students may not reach proficiency, but they may demonstrate positive growth. Likewise, a student may be proficient in a subject but exhibit minimal or no growth.

There were very slight changes in the percentage of students earning grade-level proficiency on state end-of-grade and end-of-course tests. In reading, 57.2 percent of students in grades 3-8 were considered Grade Level Proficient (GLP). This is 0.1 percentage point lower than the year before and slightly lower than the 2016-17 score of 57.5 percent. There has not been a meaningful change in state reading scores over the last five years. In math, 58.6 percent of students in grades 3-8 were GLP. Because of a change in the mathematics reporting standards and assessments, the 2018-19 scores should not be compared to scores from previous years. In science, 72.6 percent of fifth-graders and 78.6 percent of eighth-graders reached GLP. The fifth-grade average was 3.7 percentage points higher than the 2017-18 score. The eighth-grade average was 3.0 percentage points higher than the 2017-18 score. Overall, reading performance is stagnant, math performance is to be determined, and science performance is strong.

In addition, 73.3 percent of North Carolina schools met or exceeded their academic growth goals. That was a 0.6 percentage point bump compared to the year before. Academic growth measures (also called "value-added" analyses) are indispensable because they are not correlated to student demographics. On the other hand, a school that meets or exceeds growth expectations may still enroll few students that score at or above grade level, so it is important to couple growth measures with proficiency rates when gauging overall performance.

Both proficiency and growth rates are included in school performance grades. Proficiency rates (and performance metrics specific to high schools) account for 80 percent of the grade, while growth makes up the other 20 percent. Those measures are combined and scored on a 15-point scale. Across all district, charter, laboratory, and regional public schools in the state, 8.0 percent received an A, 29.3 percent scored a B, 41.1 percent logged a C, and the remaining 21.7 percent earned a D or F.

In the past, N.C. Department of Public Instruction analysts published comparisons of district and charter grade distributions. They discontinued the practice two years ago, so I have used published data to construct the comparison. As in the past, there were higher percentages of charter schools with A and B grades compared to districts. On the other hand, there are higher percentages of charter schools at the other end of the grading scale. 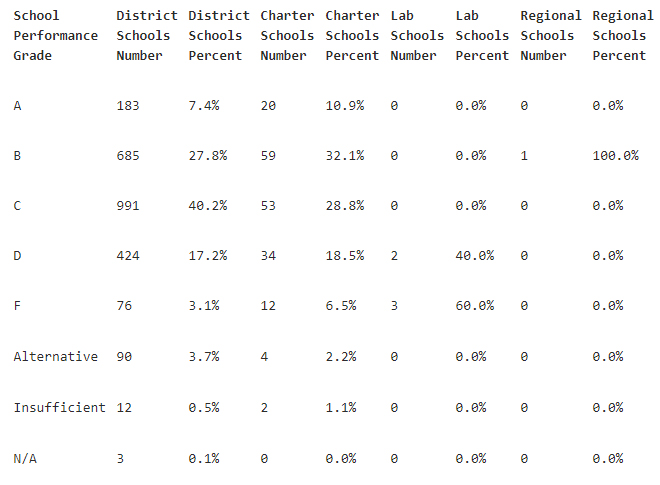 The four-year "cohort" graduation rate is the percentage of students who enter ninth grade and graduate four years later. Last year, 86.5 percent of students graduated with their freshman cohort in four years. This was slightly higher than the 2017-18 cohort graduation rate of 86.3 percent.

Across all subjects and grade levels, 58.8 percent of North Carolina students earned grade-level proficiency, and 44.5 percent met the higher "career and college ready" standard. Both are trending in the positive direction, but the fact remains that around four out of ten North Carolina students are not on track to be prepared academically for life after graduation.

While it is unwise to dismiss the latest round of state achievement data, we must keep them in perspective. Measures like graduation rates, growth measures, and proficiency rates have limitations. Research suggests that there is little evidence of a strong, consistent relationship between test scores and life outcomes.