An important new front in the culture war has opened up at the University of North Carolina at Chapel Hill, one with major implications about intellectual diversity and how universities in North Carolina are to be governed. james g. martin center, UNC board, civil discourse, campuses, september 16, 2019
Home
Categories
Login

UNC Board Steps up to Defend Civil Discourse on Campus

Published: Tuesday, September 17th, 2019 @ 3:56 pm
By: James G. Martin Center for Academic Renewal   ( More Entries )
Publisher's note: The James G. Martin Center for Academic Renewal is a nonprofit institute dedicated to improving higher education in North Carolina and the nation. Located in Raleigh, North Carolina, it has been an independent 501(c)(3) organization since 2003. It was known as the John W. Pope Center for Higher Education Policy until early January 2017. 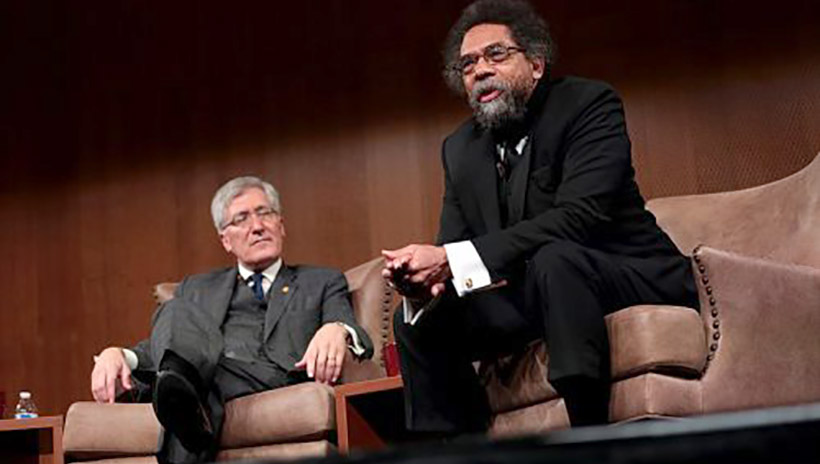 An important new front in the culture war has opened up at the University of North Carolina at Chapel Hill, one with major implications about intellectual diversity and how universities in North Carolina are to be governed.

The controversy concerns plans for a new "Program on Civic Virtue and Civil Discourse," scheduled to begin in the fall of 2021. The idea initiated with the UNC system's Board of Governors and was further developed in discussions with Princeton University professor Robert George. George heads the James Madison Program in American Ideals at Princeton. George has been influential in the program's creation, giving one address to the UNC system's Board of Governors, and engaging in a public discussion about the importance of maintaining civil discourse with his colleague Cornel West at Duke University.

George has consulted on the matter regularly with Chris Clemens, another principal actor in the new program. Clemens, who now serves as the senior associate dean for research and innovation at the UNC-Chapel Hill College of Arts and Sciences, will be the program's inaugural director until a full-time director is hired. Funding has been offered by anonymous donors, whose identities are being protected by the UNC Foundation.

It sounds like a very positive development for UNC-Chapel Hill. Knowledge of citizenship appears to be diminishing nationally, and the crucial concept of civil discourse seems to be in disarray in academia. The inability to engage in civil discourse has led to such phenomena as "safe spaces," and "trigger warnings." Even moderate conservative invited speakers are shouted down and chased away. "Twitter mobs" hound any student who voices an unpopular opinion.

On the UNC campus, civil discourse is indeed threatened. Consider that the last major campus controversy-the removal of Silent Sam, a statue of a Confederate soldier-was essentially settled by the actions of a violent mob rather than through due process. And that authorities feel so threatened by even mentioning the topic that they have continually postponed its final resolution.

The new program appears to make an extremely important statement about the public dialogue, that civic virtue and civil discourse are essential values that will be given considerable attention. This is in accord with the mission statement and other fundamental documents.

Even so, the program has drawn the ire of some faculty. In a recent Raleigh News & Observer op-ed piece, UNC-Chapel Hill history professor Jay Smith and gender studies professor Karen Booth argued for a "resolution" against the new program that, at latest count, has been signed by over 100 faculty members. (the resolution has since failed to advance). Among the reasons they list why development of the program should cease were a perceived lack of transparency, the perception that the program's courses are redundant with course offerings already in place, and the conservative leanings of the main drivers of the program.

But their major point of contention cuts to the heart of university governance-who really controls the main product of the university, its intellectual content? For decades, there has been the concept of "shared governance," in which the faculty controls the curriculum, supposedly with board oversight (which, although statutory, is rarely used by the board except for reducing programs with low enrollment). This arrangement is supported by both the American Association of University Professors and the Association of Governing Boards, but it is more conventional than statutory.

Smith and Booth described two ways in which the new program's development conflicts with this shared governance tradition. One is that the board initiated the idea for the program rather than the faculty. The other is the exclusion of the UNC faculty from the decision to create such a program and from its subsequent development.

Such moves were treated as a threat to faculty control of the curriculum and treated as some sort of violation of shared governance.

Furthermore, their legitimate concerns about the lack of transparency seem to suggest board's conduct is nefarious; the perceived redundancy suggests that the program is unnecessary or arbitrary; and the conservative political beliefs of Clemens and George make the program appear to be politically motivated.

But Smith and Booth are wrong on most counts. Most importantly, there is no violation of governance. The board is the final authority in the university system. According to State Law #116-11:


According to the Association of Governing Boards:


Surely no value in higher education is more important than the spirit of free inquiry-the search for truth without restrictions (academic freedom). One of the biggest mistakes the faculty objectors are making is they are treating their dominance in the shared governance arrangement as an end, not a means. The true end-perhaps the most important one of all in higher education-is that the university should maintain the spirit of free inquiry.

And the spirit of free inquiry is indeed threatened in today's academia. The faculty can claim that their control of the curriculum suffices to preserve open inquiry, but that is not the case, not nationally, and not at Chapel Hill. Unchecked faculty control of intellectual content is allowing the university to gradually lapse into dogmatic one-sidedness. The conservative presence on the UNC campus has decreased over the decades until it is almost invisible; politically, UNC is becoming in danger of becoming monolithic. Voter registrations of faculty reveal extreme imbalances: 17 departments, including English, History, Communications, Public Policy, and Biology, had no registered Republicans on their faculties as of June 2016. Invited speakers, summer reading programs, freshman orientation, course syllabi, course descriptions, and curriculum vitae also reveal a strong tilt to the left.

And there are powerful social and academic inducements for conservative students to keep their opinions to themselves. While some liberal faculty are scrupulous about keeping their political opinions out of the classroom, others are not. In one glaring example, UNC hired as a lecturer a violent Antifa leader who actively seeks to involve his students in his activism. At the same time, eyebrows are raised at the intentions of reputable mainstream gentleman scholars, such as Chris Clemens and Robby George, who are seeking to create a non-partisan vehicle for open discourse-because they have expressed conservative views outside of the classroom.

The uproar over the conservative origins of the program on a campus with such a political imbalance says more about those objecting than it does about the program. And, as supposed right-wing invasions of the campus go, this one is particularly benign. The intent is to teach about civic virtue and holding civil dialogues in an unbiased manner. The program's website responded to a faculty resolution to put the program's development on hold by suggesting that it will be:


The response written to the faculty resolution on the program website stated the following:

Additionally, the faculty has not been excluded from the program's planning discussions. Clemens specifically included faculty on the left in the advisory committee. One of them, Lawrence Grossberg, is no moderate liberal, but the editor of the far-left journal Cultural Studies and studied under the Jamaican communist Stuart Hall. He soundly praised the program for its lack of partisanship and intellectual merit in a Daily Tar Heel interview.

The claim that courses offered by the program are unnecessarily redundant is also not true. Smith and Booth write that writers expected to be featured in the program include "Plato, Aristotle, Madison, Jefferson, Lincoln, Tocqueville-all identified as favorites of the program-are prominent in scores of courses at UNC-CH."

There are several ways to rebut that claim. One is that a course that teaches about the writings of Plato generally is very different from a course that discusses him strictly in light of his contributions to the topic of civic virtue, and also in relation to other thinkers on the same topic. Furthermore, most of those writers can come across very differently depending on the teacher's perspective: Was Lincoln a humanitarian "Great Emancipator" or was he a racist who governed pragmatically?

Certainly, the claim that there are scores of courses with the listed authors prominently featured is technically correct, if taken in sum. After all, Plato and Aristotle are discussed in many philosophy classes. But that fact is misleading. The others may not be as ubiquitous in the UNC curriculum as Smith and Booth suggest. There are no history or political science courses in the catalog that have the names "Jefferson," "Madison," or "Tocqueville" in the title or in the course descriptions. Of course, that does not mean they are not "prominently" embedded in "scores" of other classes.

But even that seems questionable on closer examination.

There are only six history courses in the catalog in which the titles and descriptions suggest that there is a considerable likelihood of Jefferson or Madison being prominently featured, and another nine such political science courses. Much depends on what "prominent" means. Looking at some of the course syllabi, Madison or Jefferson appear to be only discussed one class per course, and if they are read at all, it is most likely one of their "greatest hits," such as the Declaration of Independence (largely written by Jefferson), Federalist Paper #10 (Madison), and the U.S. Constitution (Madison was a major contributor).

In only five of the courses is there much likelihood of Madison or Jefferson being featured in at least four classes. And much of the discussion likely concerns topics such as their contributions to federalism rather than their views on civic virtue.

In other words, some of these courses barely scratch the surface when it comes to Jefferson and Madison. This is particularly true in light of the totality of their thoughts and actions. Let alone their authorship of our foundational documents and their presidencies, and consider that their lifetime correspondence to each other is contained in a three-volume set totaling 2,705 pages. Fully comprehending their very different ideas takes a lifetime of study, not several undergraduate courses.

Furthermore, redundancy is not always bad, particularly for key topics. It never hurts to revisit major thinkers. Rather than being "redundant," it is more likely that the new program will fill a glaring hole in the curriculum.

When it comes to transparency, Smith and Booth have some legitimate concerns. The Martin Center and other conservatives have long criticized the lack of transparency in university foundations, and in academia in general. But the lack of transparency, in this case, is understandable; there is a well-oiled left-wing apparatus in place to attack conservative donors; it has enormous funding and partners with other organizations on the political left.

The foundation's lack of transparency has been evident for a long time; why are these faculty members only upset now? Their selective outrage is the definition of partisan.

In sum, the Board of Governors has decided that discourse and inquiry will remain free on the Chapel Hill campus. For that, they should be applauded. And the UNC faculty who signed onto Smith's and Booth's resolution are choosing poor ground on which to make their stand. By combating this valuable program that addresses real academic needs, they are making the case that the board should indeed be more involved in the curriculum in order to protect the university's most fundamental values.

Jay Schalin is director of policy analysis at the James G. Martin Center for Academic Renewal.