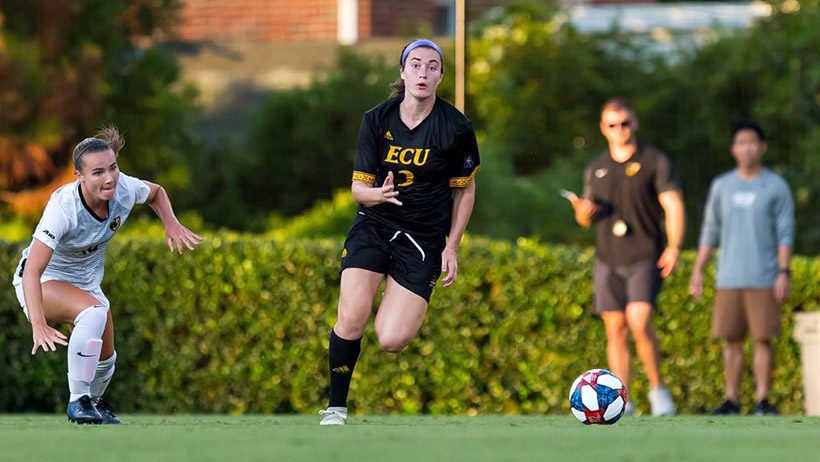 "We could not be more proud of the ladies," said head coach Jason Hamilton. "To win on the road on a Sunday against a quality team like Charlotte really shows a ton of grit."

ECU improves to 3-3-1 on the season while Charlotte drops to 5-2-0. The win was the 50th of Hamilton's head coaching career.

Most of the offense in the first half was produced by Charlotte. The 49ers took 12 shots in the period while ECU only had four shots. However, it was the Pirates that got the only goal of the half, scoring in the 16th minute. Tori Riggs pounced on a loose ball in the offensive end and found Daria Draovitch on the right wing. Draovitch whipped a cross into the box and Cashlin Copley rose up between a pair of defenders and scored on a headed effort. It was the second goal of the season for Copley.

"We talked about controlling what we can control," Hamilton said. "How hard we work, how much we compete and executing our game plan. I thought we did a tremendous job of that today."

Charlotte finished with a 17-7 advantage in shots and a 4-2 edge in corner kicks. Stiles finished with five stops to complete ECU's third shutout of the season. Abby Stapleton made three stops for Charlotte.

"We were due for one of those games," added Hamilton. "We've been on the other end of games that we had more of the ball, more shots, more corners but did not get the result we wanted. You have to find a way to win games where you aren't the better team on the stat sheet and we were able to do that today."