There's just no smooth sailing for East Carolina when it comes to lining up against Navy, even with a new head coach steeped in experience with the triple-option offense. east carolina university, ECU, football, navy, final score, september 16, 2019
Home
Categories
Login 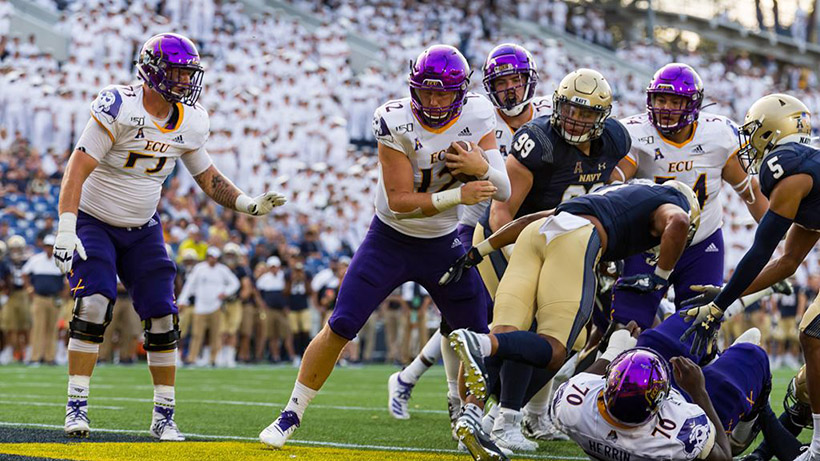 ANNAPOLIS, Md.     There's just no smooth sailing for East Carolina when it comes to lining up against Navy, even with a new head coach steeped in experience with the triple-option offense.

The Midshipman, spearheaded by senior quarterback Malcolm Perry, continued their dominance of the Pirates on an overcast and comfortable Saturday afternoon at Navy Marine Corps Memorial Stadium, rolling up a 42-10 victory in the American Athletic Conference opener for both teams.

Navy (2-0) owns six wins in seven all-time meetings with the Pirates, averaging a staggering 49.7 points per game and rolling up at least 42 points in five of those contests. The Midshipmen are now 5-0 in AAC openers - all of which have been played on their home turf (Navy's first-ever AAC game was a 45-21 win over ECU in 2015).

First-year ECU head coach Mike Houston, whose teams at Lenoir-Rhyne and The Citadel ran the triple-option offense that Navy engineers with such precision, hoped to deliver a more competitive product in his second road game and first AAC venture, but the Pirates had little success in solving Perry and the puzzle Navy presents.

Perry befuddled ECU's defense throughout the day with his crafty running and the rare instances he went to the air, rushing 24 times for 156 yards and four touchdowns and completing 5 of 7 passes for 151 yards and two more scores before taking the rest of the day off midway through the third quarter. Wide receiver C.J. Williams snared three of those passes for 117 yards - two for scores covering 29 and 80 yards.

The Midshipmen, who churned out 428 yards on the ground in their opener against Holy Cross, rushed for 315 yards against ECU with 11 different ballcarriers combining for 64 carries. Navy finished with 468 total yards and amassed 27 first downs.

ECU (1-2), hindered by the absence of starting running back Darius Pinnix, Jr. due to a shoulder injury, managed just 10 first downs and 222 total yards - just 84 on the ground - and committed two turnovers. The Pirates converted just 2-of-13 third downs; Navy converted 6-of-13 third downs and 3-of-4 fourth downs.

Navy owned a 28-3 lead by the end of a first half in which it did essentially anything it wanted out of its triple-option attack while the Pirates misfired with a flurry of mistakes.

The Midshipmen scored on their first four possessions with Perry having a hand in all four - three rushing and one passing - and converted a critical third or fourth down on each drive.

Tazh Maloy picked up 11 yards on third-and-8 on Navy's second possession, and Perry scored two plays later from the 11 for a 14-0 lead.

Perry converted another third-and-8 on the next drive, setting up a 29-yard touchdown pass to Williams and a 21-0 bulge.

A 7-yard run by Nelson Smith with a 15-yard facemask penalty tacked on kept Navy perfect on fourth-down tries in the opening half. Perry's 6-yard run capped an eight-play drive and boosted the lead to 28-3.

ECU found the waters a bit more turbulent as it tried to navigate through the opening 20 minutes. Two of six first-half penalties came on the opening drive, and then Jonn Young managed just a 17-yard punt into a stiff wind, giving Navy the ball at the Pirates' 38.

The Pirates opted not to gamble on their second possession, facing less than a yard to go on fourth down, and Young's 28-yard punt once again gave Navy good field position at its 35.

ECU appeared to have converted a fourth-and-3 on its next drive, but a penalty wiped out the play and forced a punt. Another penalty on the next drive erased a touchdown run by freshman Demetrius Mauney, and ECU settled for Jake Verity's 23-yard field goal.

Navy hit the Pirates with thunder and lightning on its first two possessions of the second half, methodically driving 75 yards in 14 plays for a 35-3 lead then striking in one play on a Perry-to-Williams strike of 80 yards to make it 42-3.

Sophomore quarterback Holton Ahlers, who was 11-of-23 passing for 138 yards, directed an ECU scoring drive early in the fourth quarter, completing three-straight passes for 40 yards, then scoring from the 2 one play after Navy was flagged with a third-down pass interference penalty in the end zone.

The Pirates would not threaten again, turning the ball over on an interception and fumble on their final two possessions.

"We did not handle the stage very well, and that showed today," Houston said. "This is not what any of us wants. I'm sure there are a lot of people around the program that are disappointed in their performance. Nobody's more disappointed than (me) and the players. We'll get this fixed; we'll get it fixed."