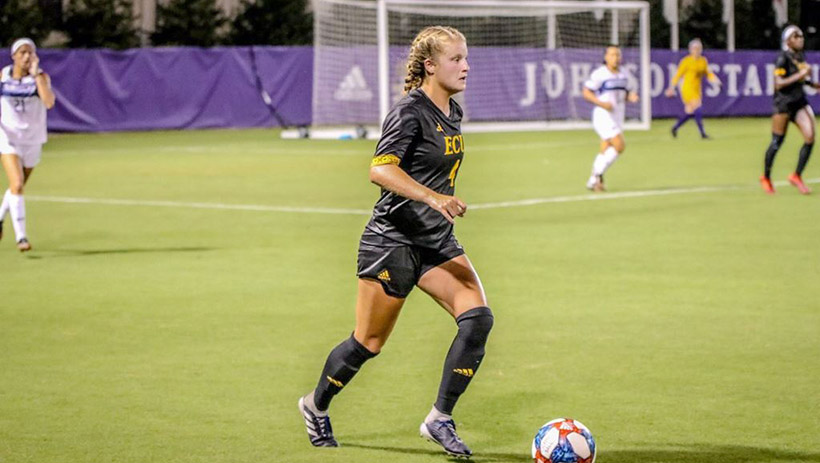 GREENVILLE, N.C.     A late goal doomed the ECU soccer team to a 2-1 loss against Old Dominion on Thursday night inside Johnson Stadium.

"I think they were better than us tonight," said head coach Jason Hamilton. "We're kind of disappointed with our effort. We talk a lot about adjusting to the game, I don't think we adjusted very well. This is a lesson that our team has to learn. If you get in your own way, you can't be successful."

Neither team had much success on offense in the first half. They combined for just seven shots, but none were on goal.

In the second half, Old Dominion started on the front foot. In the 49th minute, the Monarchs had the game's first shot on goal when Talia Tapper forced Melanie Stiles into a save.

An ECU mistake led to the game's first goal in the 56th minute. A Pirate throw-in was intercepted by Amanda Nhek deep in the ECU half. Nhek acted quickly, striking a long shot. Stiles raced back and got a hand on the ball, but not enough to prevent it from finding the back of the net.

The Pirates answered just five minutes later. Grace Doran was brought down by a Monarch in a dangerous position, just outside the box. Doran took the ensuing free kick and her shot was blocked. But Marianna Shurina collected the rebound and laid it off to Tori Riggs, who was just outside the box. Riggs curled a shot with her left foot that squeezed between the goalpost and the diving Old Dominion goalkeeper. It was the second goal of the season for Riggs.

The two teams went back and forth until Old Dominion regained the lead in the 78th minute. A shot by Kyra Ricks was stopped by Stiles, but it led to a Monarch corner. Emma Gervase took it and her cross came to the near post where Ricks was able to tap home and give Old Dominion a 2-1 lead.

With less than five minutes, ECU had a golden chance to level the score. A cross came in from the right wing and Jenna Dages rose to meet it. Her header had the Monarch goalkeeper beat, but the ball hit the goal post and bounced away.

Old Dominion finished with a 14-5 edge in shots and a 7-4 advantage in corner kicks. Stiles made three saves for ECU while Jasmine Crawley did not have a stop for the Monarchs.

"We're in a tough spot right now with the bodies that we have," Hamilton said. "We're down a lot of bodies and as games go on, we're going to get tired. We just have to be smarted in those moments and not overwork more than we need to. It's something to learn from. We can put this one behind us and move on."

ECU will next head to Charlotte for a Sunday matinee. Kickoff is slated for 12 noon.