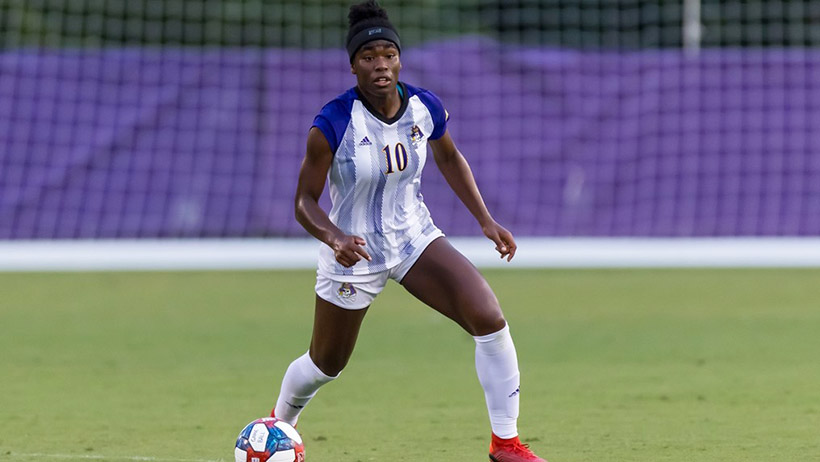 "Thursday should be a very good game," said head coach Jason Hamilton. "Old Dominion is playing very well right now and is coming off a big win. They will be organized and work hard, we know we can expect that from them. Offensively, they have some dangerous players so our group needs to be focused and aware of them at all times. We need to take advantage of being at home and have pride in performing in front of Pirate Nation."

After starting the season 0-2-1 and scoring just one goal in that stretch, the Pirates (2-2-1) went on the road to UNC Asheville and VMI, leaving with a pair of victories and eight goals scored. ECU had five different goal scorers in a 5-0 victory against the Bulldogs, with Jenna Dages and Cashlin Copley both grabbing a goal and an assist. Against the Keydets, Grace Doran scored two goals, one coming on each side of halftime, to earn a spot on the AAC Weekly Honor Roll. Through five games, the ECU offense has been egalitarian, with eight players scoring at least one goal and 13 Pirates picking up one point or more. In goal, Melanie Stiles has started all five games, making 15 stops with a .714 save percentage.

Old Dominion remains undefeated this season, with a 4-0-1 record, including 2-0-1 on the road. The Monarchs are on a two-match winning streak, both of which came on late goals. Last Thursday, Old Dominion beat Longwood 2-1 after Allie Brimmer scored in double overtime and the Monarchs followed that with a 4-3 win at VCU, with Megan Watts grabbing the game-winner in the 75th minute. Amanda Nhek has led the Monarch offense, racking up 13 points on five goals and three assists and was named the C-USA Offensive Player of the Week after scoring against both Longwood and VCU. Emily Roberts is a stalwart in the Old Dominion defense, having been named to the All C-USA Preseason Team and has played 443 minutes so far this season.

ECU has an all-time record of 8-10-2 against Old Dominion. Last season, the two teams opened their respective seasons against each other in Norfolk, Va., with the match ending in a 1-1 draw. Tori Riggs scored ECU's only goal that day, with Daria Draovitch picking up the assist. Overall, ECU is 6-1-1 at home against the Monarchs, including a 0-0 tie in 2017, the last time the two teams met in Greenville.

Kickoff is scheduled for 7 p.m., on Thursday night inside Johnson Stadium. Admission is free for all fans. Fans can also stream the match HERE or follow the live stats HERE.