Week 1 of the NFL is in the books and the Panthers are 0-1. carolina panthers, football, sports, week 1, rams, september 10, 2019
Home
Categories
Login

Panthers Lose a Hard Fought Match Against the Rams, 30-27

Login to Send a Private Message to Daniel Bunting 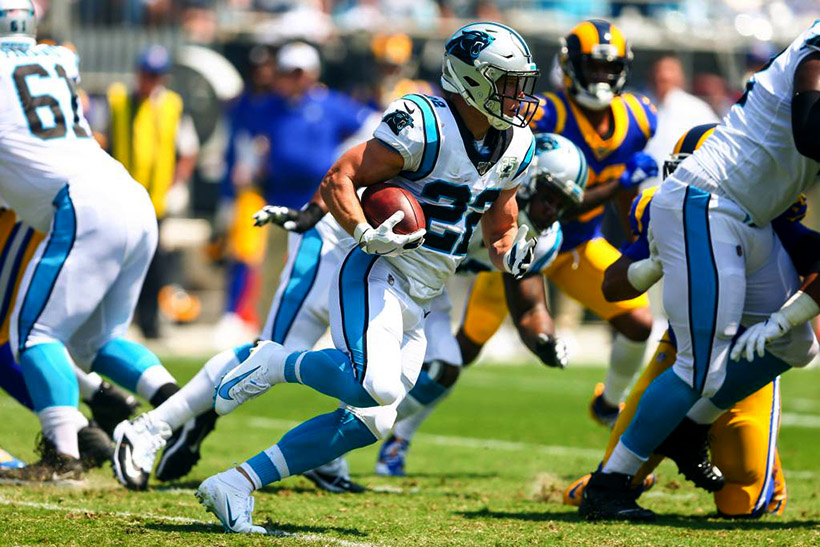 
Coming into the season, there was a lot of hype surrounding the Panthers. They made a ton of moves in the offseason to bolster nearly every weak spot on the team. With the retirement of future Hall of Famer and Panther legend, Julius Peppers, the Panthers were in desperate need of youth and speed along their defensive line. Panthers General Manager Marty Hurney did just that in the draft, loading up on young, speedy edge rushers and bringing in key veterans to fill out the needs on defense.

Hurney didn't just stop there, though. With long-time Center Ryan Kalil retiring, RT Daryl Williams hitting free agency, and the Panthers still in need of a LT to bolster the offensive line, Hurney was tasked with having to rebuild this group as well. He didn't disappoint here, either. He signed veteran C Matt Paradis to replace Ryan Kalil, resigned Daryl Williams to a one-year "prove it" deal to remain with the team, and traded up in the 2nd round of the draft to grab LT Greg Little from Ole Miss with the #37 pick.

Needless to say, with a stacked and talented front-7 on defense, a bolstered offensive line, playmakers Christian McCaffrey and Cam Newton in the backfield, and two young WR's on the outside in DJ Moore and Curtis Samuel, the pressure to perform was high... but it was made even higher by the fact they would have to face-off against the reigning NFC Champions, the LA Rams in the first game of the season. The Rams arguably have one of the most talented teams in all of football. Led by reigning Defensive Player of the Year — and most feared defender in the world — Aaron Donald and a high-scoring offense, this was certainly going to be no easy task. But, to their credit, the Panthers handled themselves pretty well.

On their first possession of the new season, the Panthers offense came out hot. Starting at their own 25 yard line, Cam Newton and Christian McCaffrey were leading the offense down the field w/ surprising ease, with McCaffrey breaking off a huge 17-yard run up the middle inside the 40-yard line, followed by a batted pass at the line-of-scrimmage that was brought down by McCaffrey and taken past the 50.

After a miscommunication in the backfield which led to Newton being sacked for a 6-yard loss and facing 3rd and 11 on the next play, Newton fires a perfect throw to DJ Moore for 11 yards and another first down. Then, on the very next play, Newton would find DJ Moore again for a first down, however — as Moore was trying to pick up an extra 4 yards to get the Panthers inside the 30 yard line — a Rams linebacker would end up making a terrific play on the ball, punching it out of Moore hands for a forced-fumble that the Rams would recover on the 33.

With the defenses time now to shine, the Rams would come out throwing the ball on their first 7 plays, picking up a couple of first downs on the way. Facing a 3rd and 5 on the 39-yard line, Rams QB Jared Goff would drop back to throw for the 8th consecutive pass play and would be sacked by CB James Bradberry for a 3-yard loss, bringing up 4th and 8 and forcing the Rams to punt the ball away. On the punt, first-round pick Brian Burns would immediately make his speed known by flying into the backfield and getting his hands on the ball to tip the punt and send a shortened kick out of bounds at the 30-yard line, setting up the Panthers next possession.

The Panthers would start their third possession off much like their first, driving the ball down field on the back of McCaffrey and making it into field goal range inside the 30, until — in typical Panther fashion — things started to get a little sloppy.

Cam Newton would overthrow 2 wide-open receivers on the drive. Then, facing a 3rd and 7, the Panthers couldn't get the play off in time and would have to take their first time-out of the half to avoid a delay of game penalty. After the time-out, more misfortune would become them as they began experiencing head-set difficulties, making it hard for the coaches to get the play in to Newton and thus having to take a delay of game penalty anyway which sent the crowd at Bank of America Stadium — and I'm sure every fan at home — into a heavy rain of boos. A delay of game penalty is one thing, but having one AFTER coming out of a timeout is unacceptable.

They would not be able to convert the first and would have to send their field goal unit out on 4th down where the rookie kicker, Joey Slye, would subsequently miss his first career FG attempt from 53 yards out, keeping the score tied at 0-0.

The second quarter would see the Rams go up 3-0 after the Rams were able to drive into FG range. The following possession for the Panthers, though, would unfortunately result in another turnover. On the second play, Newton would drop back to pass the ball down the line-of-scrimmage to DJ Moore, but the ball would be tipped by a Rams defensive player at the line-of-scrimmage where the ball would fall behind the line, ruled a fumble, and the Rams would recover inside the Panthers 10-yard line. Two plays later, the Rams would easily punch it in for their first touchdown of the game, making the score 10-0, Rams.

Not much would happen after this, with both teams failing to score any points until 1:00 left in the second quarter when the Rams would kick another field goal to make the score 13-0.

Under a minute left and needing a quick drive to try and put some points on the board before the half, the Panthers offense would do just that, marching down the field into field goal range where Joey Slye would make up for his first missed FG by making his second attempt from 46 yards away. Rams would lead 13-3 at the half.

With the Rams starting off on offense, they would have little trouble making it down the field. A couple of big chunk plays would put them in the redzone for a chance at another FG that would give the Rams a 16-3 lead.

The following drive for the Panthers would see them finally find some rhythm with Newton methodically hitting open receivers for huge gains and long runs by McCaffrey that get them inside the redzone for the first time all game. After that, Panthers offensive coordinator, Norv Turner, would draw up a fantastic play that saw McCaffrey line up at QB, fake a handoff to Newton (who was lined up in McCaffrey's normal spot at RB), and McCaffrey would keep the ball and run up the middle for the Panthers first TD of the season, trimming the lead to 16-10.

The joy wouldn't last long, though, as the Rams would re-take possession, driving down the field while eating up 6 minutes on the clock to score another TD that put them ahead 23-10.

The third quarter would end with the Panthers getting into field goal range and Joey Slye making his second field goal of the day bringing the score to 23-13, Rams.

The Rams would start the fourth quarter off w/ possession of the ball and after bringing up a 4th down, the Panthers special teams would finally make a play they so desperately needed. With Rams P Johnny Hekker back to punt, the Panthers second-year LB Jermaine Carter would come soaring through the middle of the Rams line to block the punt and the Panthers RB Reggie Bonnafon would recover the ball, setting the Panthers up on the 5-yard line. Two quick plays later, Christian McCaffrey would score his 2nd TD of the game, powering his way through two Rams defenders wrapped all over him and dragging them to the endzone to trim the lead to 23-20.

On the following Rams possession, the Panthers defense would come through yet again. With the Rams near the 50-yard line, QB Jared Goff drops back to pass and is intercepted by Panthers CB James Bradberry... but unfortunately on their following possession, after yet another overthrown pass by Cam Newton to a wide-open receiver, the Panthers would go 3-and-out, giving the ball right back to the Rams. The Rams would not make the same mistake, quickly and easily marching down the field to score yet another TD to widen the lead back up to 30-20.

On the following Panthers possession, disaster would strike once again as Newton would throw his first interception of the season giving the ball right back to the Rams. Lucky enough for him, though, the defense was able to keep the Rams from driving on a short field and facing a 4th down, the Rams would attempt a FG, but would miss wide, keeping the score 30-20.

The lone bright spot of this game is no doubt Christian McCaffrey. A lot of hype was made about him in the offseason possibly becoming only the 3rd RB in NFL history to record 1,000 yards rushing and 1,000 yards receving in a single season after posting 1,000 and 800, respectively, last year. Well he got off to a great start in week 1, finishing with 19 carries for 120+ yards and 10 receptions for 80 giving him 200+ scrimmage yards and 2 TD's on the day. This kid is a low-down beast of a player and when it's all said and done, could go down as one of the greatest Panthers ever. It'll be a joy watching this kid play for years to come.

All in all, this was sloppy game for the Panthers, but at the same time, it was a good effort. Despite their turnover troubles and Newton's multiple overthrown receivers, they still put 27 points on the board and came within 3 points of beating the reigning NFC Champions. The defense played well, yet made mistakes and a lot of missed tackles that allowed the Rams to put up 30 points. But then again, the offense didn't do them any favors by keeping them off the field and it showed toward the end when the defense started looking tired and giving up chunk plays.

The Panthers lived up to their team motto, though, and kept pounding to give the Rams every bit of a game they could. It's not great starting the season 0-1, but it's not the end of the world either. There's still a lot of work to be done, but they also showed enough bright spots that could make this team dangerous down the line if they can iron out the kinks.