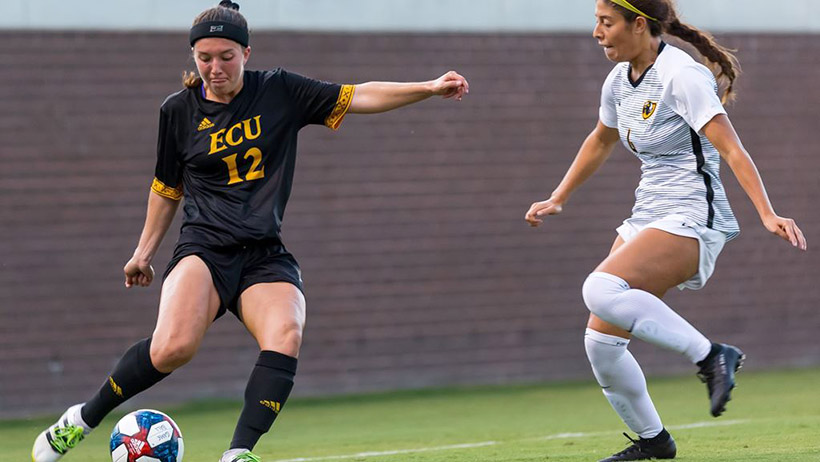 LEXINGTON, VA.     A pair of goals from Grace Doran helped the ECU soccer team cruise to a 3-0 win at VMI on Sunday afternoon.

"Overall we are happy with two road wins and two shutouts," said head coach Jason Hamilton. "Getting a couple of wins under our belt will hopefully give us some confidence heading back home. Sunday games are very tough and we are very proud of the effort put forth today. Our decision-making and discipline is an area we can improve going forward in order to have success in the AAC."

Much like their 5-0 win at UNC Asheville on Friday, the Pirates took command of the game with a first-half goal and then blew the game open with multiple goals in the second stanza.

While it does not officially count in the stats, Doran scored a long-range goal in ECU's season-opener against George Mason, a game that was abandoned at halftime due to the rain. On Sunday, she officially opened her account with another blast from outside the box. This time, she collected a pass from Maycie McDougal at the top of the VMI box and her ensuing shot found the upper left hand corner of the Keydet goal, giving ECU a 1-0 lead in the 26th minute.

Doran added a second goal just over five minutes into the second half. Lexi Moore was able to find Doran behind the VMI defense and the sophomore from Dearborn, Mich., raced in on a breakaway. Doran lofted a shot again into the upper left corner for her second tally.

The Pirates added a third goal in the 81st minute. Tori Riggs crossed into the box from the right-hand side and Sophia Demark connected with her pass, sending a low shot past the Keydet keeper for the first goal of her collegiate career.

"With all the injuries we are dealing with, we had to play some less experienced players," added Hamilton. "This weekend was good for us to get them some minutes and hopefully shake their nerves before facing a handful of top-25 teams down the road."

The Pirates finished with a 19-12 advantage in shots and took eight corner kicks to just five for VMI. Melanie Stiles played the first 78:01 in goal for ECU, making four saves. Meaghan Haley relieved Stiles for the final 11:59 to put the finishing touches on ECU's second consecutive shutout. Noelle Heilpern made eight stops for VMI.

ECU will be back home for the first time in nearly three weeks when the Pirates host Old Dominion on Thursday night. Kickoff is scheduled for 7 p.m., inside Johnson Stadium.