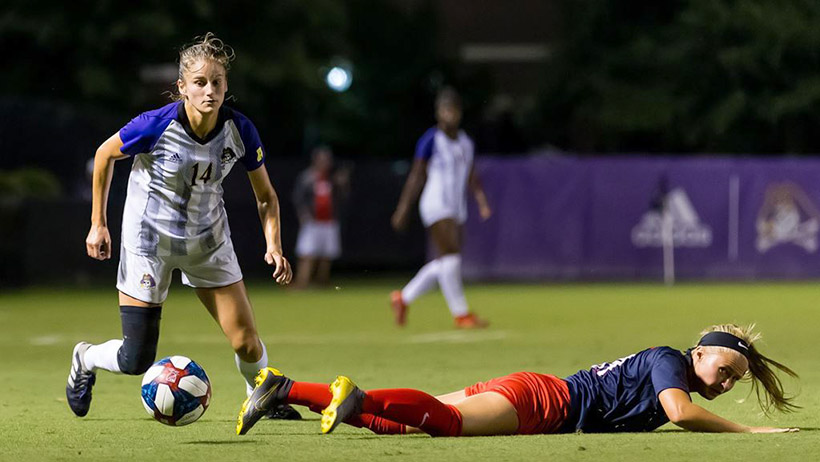 ASHEVILLE, N.C.     In its most dominant effort of the young season, the ECU soccer team earned a 5-0 win over UNC Asheville on Friday afternoon at Greenwood Field.

"First of all, we want to thank Asheville for hosting us on short notice," said head coach Jason Hamilton. "Getting these games in before conference play is important to be able to improve and grow as a team."

ECU had struggled to score in its first three matches, grabbing just one goal in that span. However, it took only 26 minutes on Friday for the Pirates to get on the scoreboard. Cashlin Copley connected with Jenna Dages and Dages was able to score her first goal of the season.

In the second half, the floodgates poured open for the Pirates. ECU grabbed a second goal just 45 seconds after the restart when Dages set up Cashley for a goal of her own.

In the 61st minute, Marianna Shurina played in a corner kick and Madie Knaggs was there to drive it home.

A comfortable victory was turned into a rout when the Pirates added two more goals within three minutes of each other. In the 73rd minute, a pass from Alyssa Palmucci set up Lauren Hollis to score. It was the first collegiate point for both Hollis and Palmucci. The scoring came to an end in the 76th minute after Tori Riggs scored her first goal of the season on an individual effort.

"The second half breakout was what we've been waiting for," Hamilton said. "Even with a third of our team out injured, we know we have a quality group and it was good to see them start clicking."

The Pirates finished with a 24-3 advantage in shots and took eight corners to just one for the Bulldogs. Melanie Stiles played the first 70:44 in goal for ECU and finished with two saves. Meaghan Haley made her official ECU debut, playing the final 19:16 to complete the shutout. Bryson Lee made seven stops in goal for Asheville.

"I've always said winning is contagious and getting that first one is sometimes difficult," added Hamilton. "Now we just need to build off that game moving forward and continue to improve."

ECU will finish its road trip on Sunday afternoon when the Pirates head to VMI. Kickoff is scheduled for 1 p.m.