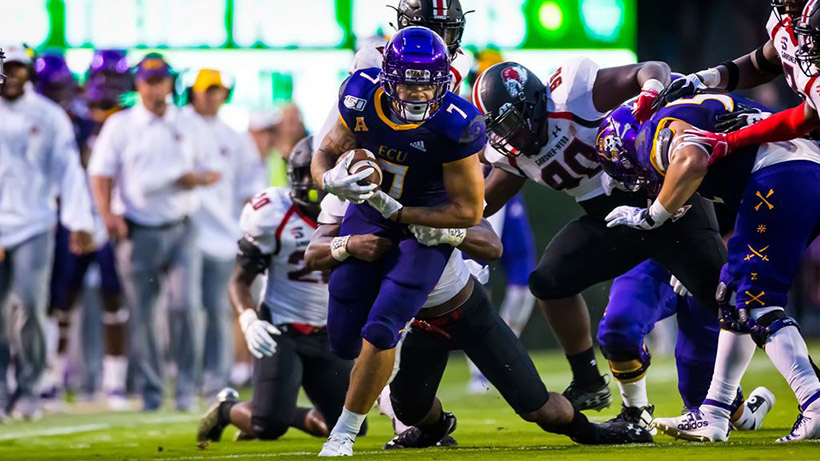 GREENVILLE, N.C.     Mike Houston's dad would have been proud.

East Carolina's first-year head coach capped an emotionally challenging week spanning from sorrow to exhilaration by bagging his first win at his new school, a dominant 48-9 victory over Gardner Webb on a pleasant Saturday night before a turnout of 34,118 in Dowdy-Ficklen Stadium.

From his previous stops at Lenoir Rhyne, The Citadel and James Madison, Houston imagined what the conversation with his dad, Bill Houston, would have been after Saturday's win.

"He would have found something we could have done better; I promise you that," Houston said, reflecting on his father, who passed away Tuesday morning. "He always had something we could do better. But he was always proud of the way our teams competed. When I think back to growing up, that was the thing he tried to teach me. No matter what you're always going to go out and compete. And I think he would have been proud of our team tonight and the way they competed."

That's one of the reasons ECU (1-1) turned to Houston after three consecutive 3-9 seasons and the dismissal of head coach Scottie Montgomery. He took the job on Dec. 3, then began a new era in Pirate football last Saturday with a 34-6 loss at NC State, the start of a week tugging at his emotions and responsibilities.

On Monday, Houston returned to his hometown of Franklin in western North Carolina, where he had an opportunity to spend some final moments with his father. After conducting practices Tuesday and Wednesday in Greenville, Houston attended his father's funeral on Thursday then flew back to Greenville as Hurricane Dorian began lashing the North Carolina coast.

Through it all he leaned on his staff and tried to direct his focus to the game ahead.

"Men, they tend to compartmentalize stuff, and that's what I tried to do," Houston said. "Certainly, the aspect of the family, it's been tough. I just tried to focus when I got back here on the players, the game and all that, and I thought the kids just did an excellent job. Our staff, I knew they would be able to handle everything. I had to leave for a day. I thought the kids handled it with tremendous maturity.

"I knew when I took the job in December, my dad, that's when his health started to decline a little bit more rapidly, so I knew this day would come," he said. "I didn't know when, and it came really, really quick over the weekend. It kind of punches you in the gut a little bit. But the support of the fans, the support of the staff here was just really incredible. And it makes me sit back and really count my blessings."

"We always play for him," Ahlers said. "He's obviously a great guy. We're excited he's here and his staff is here. For him to be able to go out there and coach a football game under the circumstances that him and his family are in, it means a lot to us. Obviously, we're praying for him and we always play for him."

The Pirates did all the things that Houston wants - and add up to victories. They dominated the line of scrimmage, unleashed a punishing running game, gave up little on the ground defensively and created turnovers.

Ahlers directed an offense that amassed 574 total yards and 31 first downs. The left-hander from Greenville completed 18 of 29 passes for 195, surpassing 2,000 yards for his young career, and rushed 10 times for 78 yards and a pair of scores.

Junior running back Darius Pinnix, Jr. and freshman Demetrius Mauney each eclipsed 100 yards in a rushing attack that piled up 365 yards. Pinnix set career-highs with carries (21) and yards (134), while scoring a pair of touchdowns. Mauney entered in the second half and finished with 107 yards on 13 carries.

On the flip side, Garner Webb (0-2) managed just 39 rushing yards and 13 first downs. Quarterback Jordan Smith connected on just 11 of 23 passes and was picked off twice.

"We wanted to be able to run the football effectively early in the game, take control of the ballgame," Houston said. "We wanted to try to force them to try to throw the ball. I thought we were able to do that. I really did think our play on the two lines of scrimmage were truly the difference in the ballgame."

The first series on both sides of the ball set the tone for the night. Paramount for the Pirates was getting into the end zone on their first drive, ending a touchdown drought of 165 minutes and 33 seconds of game time and 288 days dating back to the second quarter against Cincinnati on Nov. 23, 2018.

Ahlers, who fumbled near the goal line on the opening series at NC State, did the honors with a 7-yard run 4:20 into the game.

The Pirates then quickly forced Gardener Webb to punt and energized the home crowd. After a holding penalty wiped out a 22-yard gain, Kendall Futrell recorded the first of ECU's five sacks, then Xavier Smith nearly intercepted a Smith pass.

The Pirates drove inside the Gardner Webb 10 on their second possession but settled for a 24-yard Jake Verity field goal and a 10-0 lead with 7:04 left in the first quarter.

The Bulldogs, after losing 18 yards on seven plays on their first two drives, finally found some rhythm and marched 75 yards in 10 plays that narrowed the margin to 17-7. The drive was highlighted by a 25-yard pass from Smith to Izaiah Gathings to the ECU two-yard line, a play that also ended the night for ECU free safety Davondre Robinson because of a targeting penalty.

A 13-yard run by Pinnix finished off a 10-play, 87-yard drive to put ECU 24-7, then the defense pitched in to set up another score to cap off the first half. After a holding penalty erased a 36-yard Smith-to-Gathings pass and backed the Bulldogs to their 19, talented freshman Ja'Quan McMillian came up with his first career interception at the 35 and returned it to the one. Ahlers scored two plays later from the two for a 31-7 lead.

Another interception on the opening possession of the second half, this one by Gerard Stringer, along with a late-hit penalty, set up a 20-yard pass from Ahlers to Blake Proehl for a 38-7 lead.

Gardner Webb took advantage of a punt to the one later in the quarter when Josh Ramseur dropped Pinnix in the end zone for a safety - its first since 2015 against South Alabama.

A penalty for an ineligible man downfield cost freshman C.J. Johnson his first career touchdown catch on a 19-yard strike from Ahlers just before the end of the third period. Deonte Grier then picked off an Ahlers pass at the goal line on the opening play of the fourth period.

A drive featuring Mauney stalled after reaching the five, and the Pirates tacked on a 28-yard field goal by Verity for a 41-9 lead. Backup quarterback Reid Herring accounted for the final points with a 10-yard run with 4:33 to play.

"Obviously a lot more enjoyable night tonight than last Saturday," Houston said. "You get in these ballgames, your home opener, and you have all these visions of how it's supposed to go. It's very refreshing when your team comes out and plays the way you know they can. We made a ton of mistakes, there's no doubt. We have tons of things to correct, but I thought our guys really played hard."