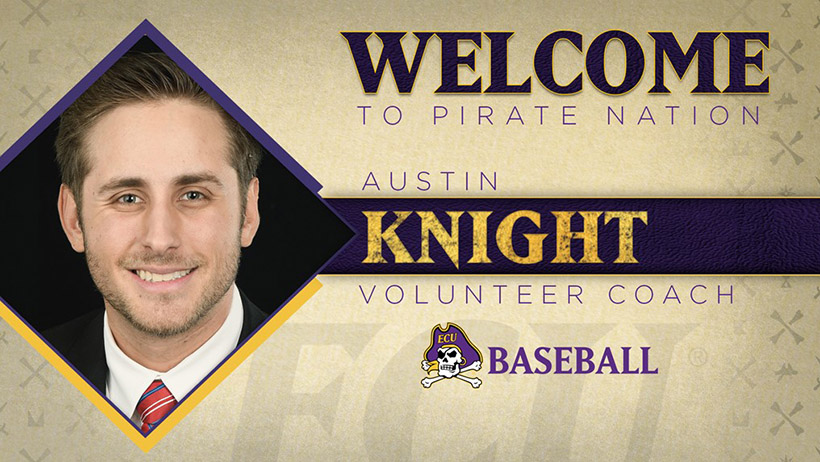 GREENVILLE, N.C.     Austin Knight has been named the volunteer assistant coach on the East Carolina baseball staff according to an announcement by head baseball coach Cliff Godwin on Thursday.

A four-year letterwinner at Ole Miss (2012-15), Knight will work directly with the outfielders while also assisting with the catchers and hitters. He will also coordinate all of ECU's summer, fall and winter camps.

Knight comes to ECU after spending the last two years at Louisiana Tech where he held the same position working primarily with the catchers, while serving as the Bulldogs camp coordinator and helping with baseball operations under head coach Lane Burroughs. During his two seasons, the Bulldogs posted a 73-44 record that included a pair of top three finishes in Conference USA (second in 2018). Knight's catchers allowed just 14 passed balls over two seasons and threw out 32 percent of would-be base stealers in 2018, which stood fourth in the league.

"Austin is a tremendous addition to our staff," Godwin said. "He is a coach's son who has caught at the highest level collegiately at Ole Miss and also played in the 2014 College World Series. Austin brings a wealth of knowledge about the game of baseball to our program. He will help our guys develop into the best version of themselves both on and off the field. Pirate Nation, let's welcome Austin into our P.I.R.A.T.E.S. family."

Prior to his stint at LA Tech, Knight spent two seasons as a graduate manager at the University of Arkansas Little Rock working under head coach Chris Curry. During that time with the Trojans, he worked with the catchers and assisted with all aspects of the program's recruiting and traveling.

While at Little Rock, Knight spent two summers as an assistant baseball coach for the Yarmouth-Dennis Red Sox of the Cape Cod Collegiate Baseball League tutoring some of the top young catchers in the country. Brent Diaz, a 2017 Johnny Bench Award finalist, not only saw an increase in power numbers but also saw his average rise nearly 60 points from 2016 to 2017. While in the Cape Cod League, Knight also coached Matt Whatley, a third-round pick by the Oakland A's and winner of the 2017 Johnny Bench Award. Overall, he worked with five catchers who were selected in the 2017 MLB Draft.

Before making the leap into coaching, Knight played collegiately at Ole Miss under head coach Mike Bianco where he helped the Rebels to a 153 wins, four NCAA Regionals and an appearance in the 2014 College World Series. With Godwin's tutelage, then an Ole Miss assistant coach, Knight appeared in over 120 games, was a two-time SEC Honor Roll selection and three-time scholar-athlete.