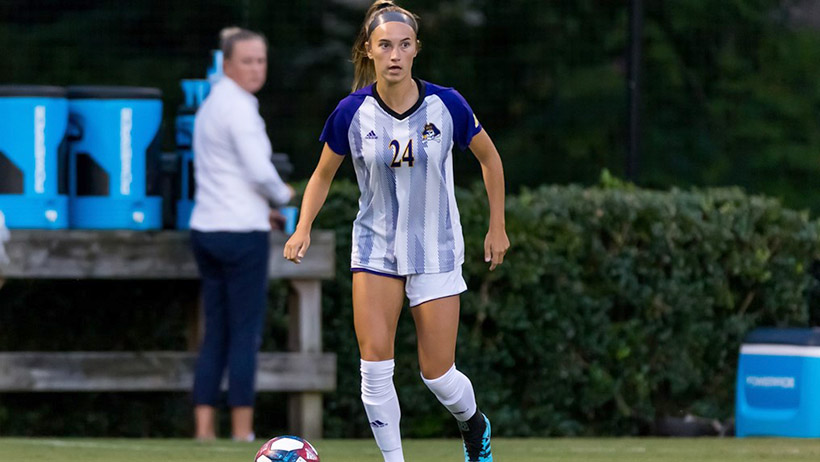 GREENVILLE, N.C. — The impending weather from Hurricane Dorian has forced the ECU soccer team to hit the road for a pair of games this weekend, with the Pirates heading to UNC Asheville and Virginia Military Institute.

"We were very fortunate to be able to add these two matches so late," said head coach Jason Hamilton. "This trip gives our team a little adversity to have to try and overcome. We picked up a few knocks last weekend, so these two games give players an opportunity who have not seen as many minutes yet this year. This experience should help us down the road, allowing us to see how deep our team really is."

ECU (0-2-1) is coming off a pair of road losses. The Pirates fell 4-0 at No. 6 Virginia before dropping a 1-0 decision to Radford. Despite grabbing only one goal between its three games, ECU has had more than a few chances to score, taking 36 shots so far and outshooting both Richmond and Radford. Cashlin Copley leads the Pirates with nine shots while Daria Draovitch is right behind her with seven, including the only goal of the season. Melanie Stiles has played every minute in goal for ECU, making nine saves so far.

Like ECU, UNC Asheville (1-2-0) has struggled to score so far this season, with the Bulldogs' only goal coming in a 1-0 overtime win at East Tennessee State. Asheville was shutout in a 2-0 loss against American and in a 6-0 loss at Appalachian State. Skyler Chillson has the only goal of the season for Asheville while Chloe Lamenzo picked up the assist. In goal, Courtney O'Malley has started all three games, making 12 saves in 213 minutes of action. Bryson Lee has also played in goal and has two stops.

VMI (1-2-0) earned its only win of the season so far at Delaware State, topping the Hornets 4-0. The Keydets have fallen to Hampton (1-0) and at American (2-0) with a matchup against Radford scheduled for Thursday night. Four different players scored for VMI against Delaware State, including Kiley Cropper who was the second-leading scorer for the Keydets in 2018. Noelle Heilpern has played every minute in goal for VMI, making six saves and owning a goals against average of 1.00.

ECU has only played UNC Asheville once while the Pirates have never taken on VMI. The meeting with the Bulldogs came during the 1997 season when ECU earned a 2-1 home win in overtime. Asheville will be the second team from the Big South Conference that ECU has taken on this season, having fallen at Radford. VMI will be the first of two Southern Conference foes on the Pirates' schedule this season, as ECU is scheduled to matchup against UNCG on Sept. 22.

Kickoff at Asheville is scheduled for 1 p.m., on Friday afternoon while the Sunday matinee against VMI is also scheduled to start at 1 p.m.