A court ruling will force N.C. lawmakers to redraw state House and Senate election maps for 2020. Regardless of how that process plays out, the state will need another set of new maps in 2021. carolina journal, redistricting, gerrymandering, election maps, september 5, 2019
Home
Categories
Login

Veteran of Redistricting Legal Battles Looks Ahead to 2021 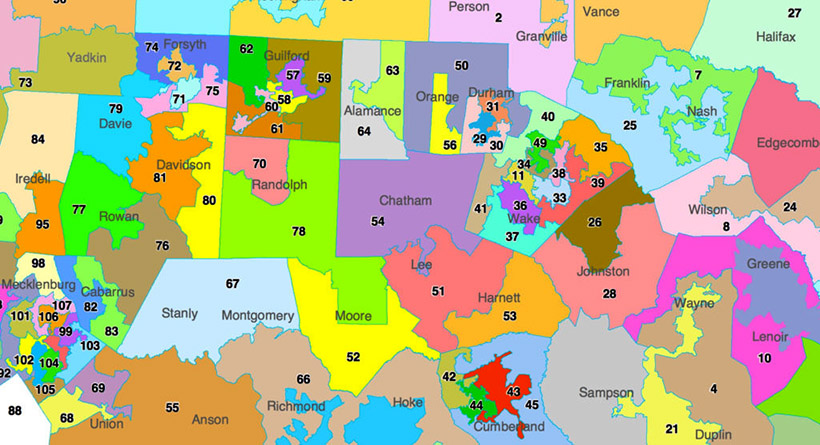 A court ruling will force N.C. lawmakers to redraw state House and Senate election maps for 2020. Regardless of how that process plays out, the state will need another set of new maps in 2021. It's a constitutional mandate.

Advice from a veteran of decades of election lawsuit fights might help mapmakers as they move forward.

"There is no such thing as politically neutral districting." Raleigh attorney Thomas Farr offered that assessment before the new ruling in Common Cause v. Lewis. It's embedded in his 17-page document titled "Lessons Learned from 35 Years of Election Law and Redistricting Litigation." Participants in the American Legislative Exchange Council's recent annual meeting in Austin, Texas, had a chance to read the document and hear directly from Farr.

"[T]he location of a district line always has political consequences and makes the district in question stronger for one party and weaker for another," Farr writes, citing a 2004 dissenting opinion from U.S. Supreme Court Justice David Souter. "This indisputable point must be made to every court that considers a political gerrymandering claim."

"Plaintiffs want the courts to choose political winners and losers in the drawing of district lines," adds Farr, who has represented N.C. Republicans in redistricting fights since Democrats controlled the state's mapmaking process. "But in almost every jurisdiction in the United States, the drawing of district lines traditionally has been reserved to the People's elected representatives. It is far more democratic for elected representatives to make inherently political decisions than for this legislative authority to be usurped by judges."

Most of Farr's advice is designed to help legislative mapmakers avoid legal pitfalls. The first item on his list: Anticipate lawsuits. "Every step you take during the planning and process of redistricting should be based upon this reality."

Those expecting the "Lessons Learned" to expose nefarious Republican scheming will be disappointed. Farr urges lawmakers to conduct a redistricting process "as transparent and courteous as possible." The majority party "should solicit input from the opposing party and minority groups regarding their ideas for the composition of districts."

Mapmakers should "strictly comply with all applicable legal criteria," Farr writes. For example, mapmakers should avoid a "traditional tactic": packing more voters into districts that favor the minority party's candidates and as few voters as possible into districts that favor the majority party. "Under recent Supreme Court precedent, this is clearly illegal and must be strictly avoided."

And Farr emphasizes that mapmakers should follow their regular legislative process. Truncating the process can be used as evidence of "bad intent."

Perhaps the most interesting part of the document features Farr's predictions for the 2021 election cycle. Elected officials in North Carolina and states across the country will use new census data to redraw election district lines in 2021.

"This is particularly true in jurisdictions where Republicans control the redistricting process but Democrats have a majority on the state supreme court," he writes. That scenario describes North Carolina today. Republicans control both chambers of this state's General Assembly. Democrats hold a 6-1 advantage on the N.C. Supreme Court.

Farr warns legislative mapmakers about unclear legal standards involving the use of racial data in drawing election maps. It's a subject that "requires expert testimony and expert legal counsel," he writes.

The U.S. Supreme Court ruled in 2017 that mapmakers can use race as a factor "only when there is evidence that the minority group cannot elect its candidate of choice because the white majority almost always votes in a bloc to defeat the minority group's preferred candidate," Farr advises.

But that doesn't resolve the issue. "The extent to which race can or should be used to draw districts is a complicated and consistently evolving area of law," Farr writes.

Farr warns lawmakers to be wary of academic theories that would replace traditional district-by-district electoral battles with some form of "proportional representation." That system would tie the number of legislative seats a party wins to its percentage of the statewide vote.

He also raises concerns about computer-simulated election maps. "[T]hey do not take into account legitimate districting criteria known only to members of your legislature," Farr writes. "This can include an incumbent's knowledge of his local communities or incumbents on both sides being able to retain their core group of constituents."

The right type of constitutional amendment also could play a positive role in redistricting, Farr advises. Such an amendment would limit judges' ability to change election maps. "This can include amendments adopting strict districting standards which limit the districting authority of your legislature and which mandate that neutral and judicially manageable criteria are the exclusive rules for courts to review districts."

No one should expect an election mapmaking process divorced from politics. The two are "inseparable," Farr writes. "However, we also believe that it benefits all parties and voters to set clear and precise criteria ... to protect our tradition of geographically compact single-member districts and to limit the discretion of any legislature (or any court) to depart from traditional redistricting criteria."

This state has seen near-constant legal battles for decades over election maps drawn by both Democrats and Republicans. "Clear and precise criteria" could limit legislative and judicial mischief. They could help take election battles out of the courtroom and send them back to the ballot box.