No. 6 Virginia Races Past ECU 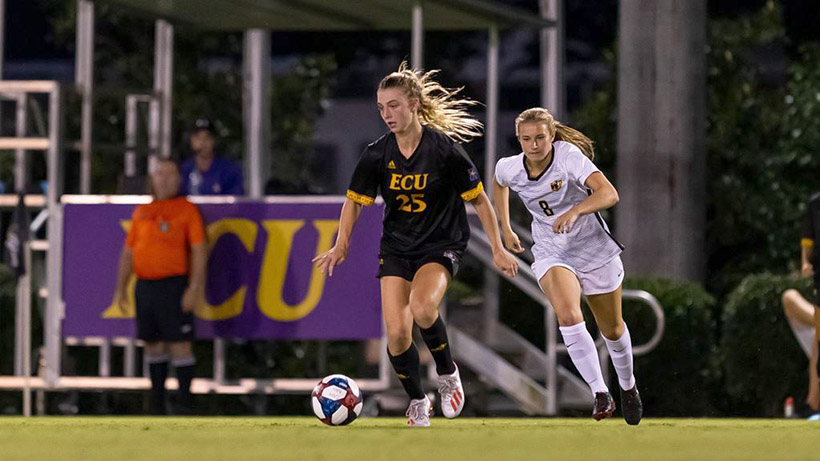 CHARLOTTESVILLE, VA.     Three second-half goals sent the ECU soccer team to a 4-0 defeat at No. 6 Virginia on Friday night at Klockner Stadium.

"Tons of credit to Virginia, they are a top notch team and that was no surprise to us," said head coach Jason Hamilton. "We had a group of ladies that played very well tonight, but it has to be everyone and not just a portion of them. That was great experience for us this early in the season and gives us a lot to work on moving forward."

The first half was controlled by the Cavaliers. Virginia took 12 shots to just one for the Pirates while the Cavaliers also had four corner kicks. However, the Pirates limited the damage, allowing just a single goal.

The opening tally came in the 21st minute when Rebecca Jarrett found space down the right hand and whipped in a cross. Meghan McCool was the first to get to the cross and directed the ball into the back of the East Carolina goal.

Unfortunately for the Pirates, Virginia wasted little time extending its lead after the halftime break. In the 48th minute, Diana Ordonez directed a header into the goal off a corner kick off a corner kick service from Taryn Torres.

Virginia threatened to extend its lead even further just 10 minutes later. A foul in the ECU box led to a penalty kick for the Cavaliers. However, Melanie Stiles was able to dive to her right and stop the ensuing shot to prevent Virginia from scoring.

Just minutes after Stiles' save, ECU nearly got one goal back. Sophia Demark got free from the Virginia defense and let loose a shot, but the Cavalier goalkeeper, Laurel Ivory, turned the attempt away to keep the lead at two goals.

The Cavaliers put the game away with a pair of goals in a three-minute span. First, Ordonez pounced on a loose ball in the Pirate box and her shot found the side netting for her second tally of the day. Two minutes later, Anna Sumpter was able to score off a service from Cam Lexow.

"We've spent a lot of time this week talking about growing as individuals and growing as a team," Hamilton added. "Understanding the level we are at is a really important thing that we have to do. It's on us all as a program, the coaches to find better ways to teach, and the players to process the information and improve. The good news is it is early and we have a lot of soccer left, so we will regroup and get ready for the next one."

The sixth-ranked Cavaliers held a 24-3 edge in shots and an 8-2 advantage in corner kicks. Stiles finished with five stops for ECU while Ivory made the one save for Virginia.

The Pirates will continue its road trip through Virginia on Sunday with an afternoon matchup against Radford. Kickoff is scheduled for 2 p.m., and the match will be streamed on ESPN+.