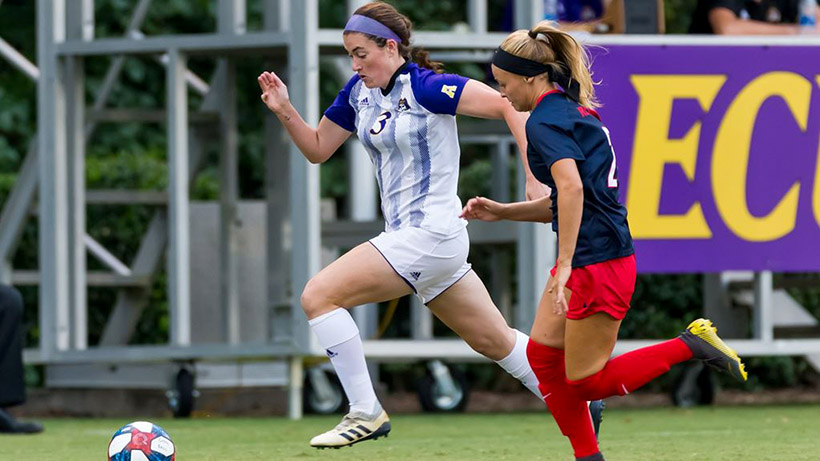 RADFORD, VA.     The first road trip of the season for the ECU soccer team ended with a 1-0 loss at Radford on Sunday afternoon.

"It's not something we want to say first thing after every game, but again we find ourselves talking about being outworked by our opponent," said head coach Jason Hamilton. "The definition of insanity is doing the same thing over and over again and expecting a different result and that's kind of where we are as a program right now. We are not progressing in the areas that we need to progress in."

The Highlanders were the first to score, getting on the board in the 27th minute. Gabi Paupst played a pass to Nicole Ray down the left-hand side. Ray squared a pass across the ECU box and Nelia Perez was waiting on the back post to tap it home.

In the second half, ECU was on the front foot as the Pirates tried to tie the game up. ECU took nine shots in the second 45 minutes, but just two of them were on goal. Cashlin Copley and Daria Draovitch led the way with five shots apiece. Unfortunately, the Pirates could not breakthrough and score the goal they needed as the Highlanders completed the shutout.

"We have some very smart and talented players on our team," Hamilton said. "They know what to do and when to do it if you just ask them, but it's just not transferring on the field. We need to go back to what made us a successful team last year and that is hard work, physicality and doing things with urgency."

East Carolina had a 13-8 advantage in shots while both teams took three corner kicks. Melanie Stiles made a pair of saves in goal for the Pirates while Courtenay Kaplan (three saves) and Lexi Dean (two stops) each played 45 minutes to complete the shutout.

The Pirates will be back home on Thursday night when they host UNC Wilmington. Kickoff is scheduled for 7 p.m., inside Johnson Stadium.