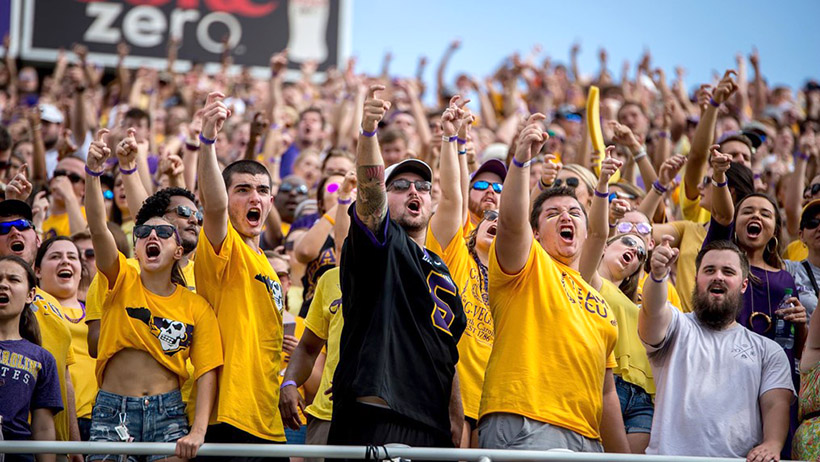 East Carolina football fans can expect several enhancements to their gameday experience for the six home games in 2019 at Dowdy-Ficklen Stadium.

Several new elements will be unveiled with new videos, promotions and overall flow of the game production. Among the new additions in and around Dowdy-Ficklen Stadium are:

The most exciting addition to Dowdy-Ficklen Stadium is new head football coach Mike Houston and his coaching staff. Houston was officially introduced as the Pirates' 22nd head coach on December 4, 2018. The Franklin, N.C. native owns an 80-26 record and a combined six conference championships in eight seasons as a head coach. He guided James Madison to successive NCAA FCS Championship Game appearances and one national title in three seasons as the Dukes' head coach.

The ECU Athletics Department will have a new addition for children in 2019 with the opening of the first Kids Zone inside Dowdy-Ficklen Stadium, sponsored by Eastern Ortho and Pediatric Dentistry, Air U Trampoline Park and Greenville Utilities. The Kids Zone will be in the grass area right behind Sections 10-11 with Gate 4 being the nearest gate.

The Kids Zone was the brainchild of longtime Pirate donors Brenda and Harvey Lewis.

Featuring inflatables, interactive games, cornhole, giveaways, 3-hole mini golf, face painter, balloon artist, giant Connect Four and Jenga among other games, the Kids Zone will be open two hours prior to kickoff. In addition to games, the area will have a device charging station and a photo zone where young Pirates can try on uniforms and take pictures in PeeDee and ECU player cutouts.

Fans attending East Carolina football games for the 2019 season will notice a decrease in food and beverage prices for several items. The athletics department is committed to offering fans a lower rate than normal for several gameday snacks and drinks. Fans will be able to buy a soda, hot dog and popcorn for $8.

Check out the new fan-friendly concession prices below: 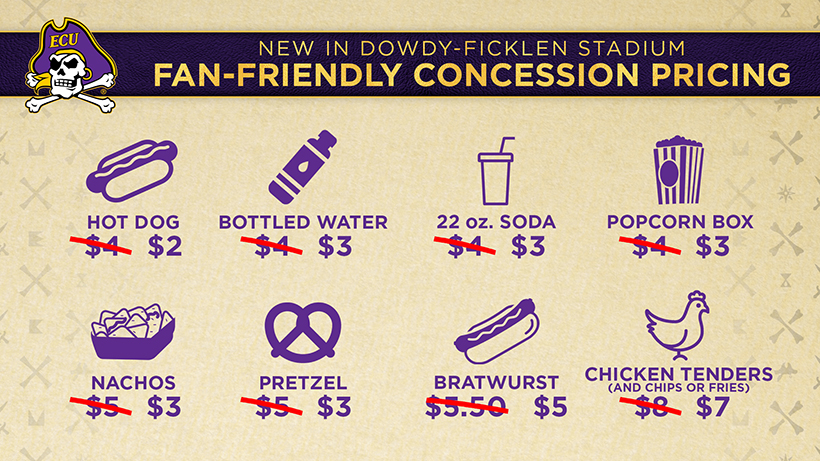 The newly routed Pirate Walk will begin two hours and 30 minutes prior to kickoff on the Howard & Lyn Swain Pirate Promenade in front of TowneBank Tower. The ECU Marching Band and members of the Spirit Squad will lead head coach Mike Houston and student-athletes down the walkway leading to TowneBank Tower. The group will walk in front of historic Scales Field House toward the Ward Sports Medicine Building before concluding at the Pirate Statue between the entrance to Ward Sports Medicine Building and Gate 4.

When the Pirates take the field on Saturday, the team will walk from their locker room inside Ward Sports Medicine Building to Gate 4. Fans will be able to stand on both sides of the secured area to cheer on the Pirates as they take the field. The Pirates will enter the field through the customary Pirate Skull and tunnel and a new introduction video will debut on Saturday.

Perhaps the most visible addition to fans on gameday will be the TowneBank Tower which resulted in the creation of over 1,000 premium seats with the Trade Club level, loge boxes, suites and founder's suites. The addition of the tower complements and greatly enhances the gameday atmosphere with the Carl and Connie Rogers Pirate Club Level and premium parking spaces. Access to the tower is limited to only Pirate Club donors and guests who have invested in these premium seating areas. The tower includes: 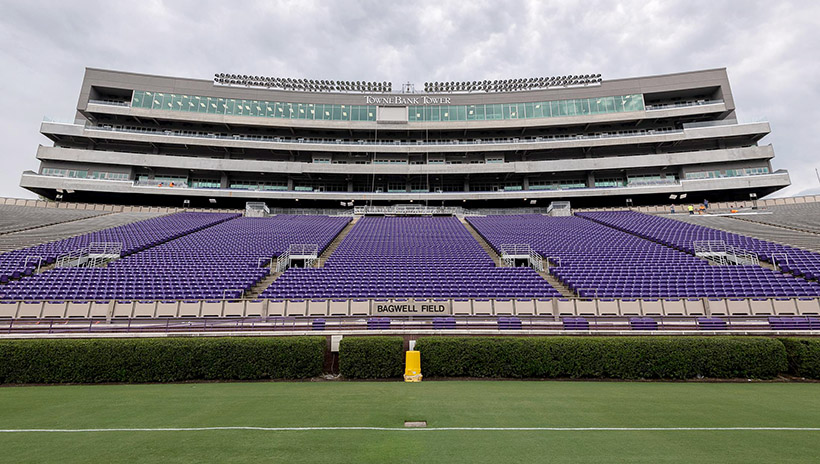 Located on the southside of Dowdy-Ficklen Stadium, the Premium Parking Lot has more than 500 parking spots and each are equipped with a new feature provided by Suddenlink. As you arrive early to your tailgate this season, make sure you bring your extra TV. Just hook up your TV to the newly installed pedestal with power and a coaxial cable, scan your TV for new channels, and sit back a relax as you watch whatever game you want until it's time to watch the Pirates!

An exciting addition to the in-stadium experience this year is the addition of the Pirate Lights App. Brought to you by Coca-Cola, Pirate Lights is a multi-usage app designed to enhance and include fans in the in-game experience. Some functions of the app include the ability to play trivia with other fans in the stadium, participate in a selfie cam that is integrated into the video board, and synchronize your mobile phone lights into designated parts of the game. Pirate Lights is free; just search "Pirate Lights" in the app store. Fans must download the app in order to participate in the home opener against Gardner-Webb.

StillLife will return in 2019 to provide the in-stadium music after a successful integration last year. Both East Carolina Athletics and StillLife have worked diligently over the past six months to continue to provide a wide-range of music that accommodates all fans. 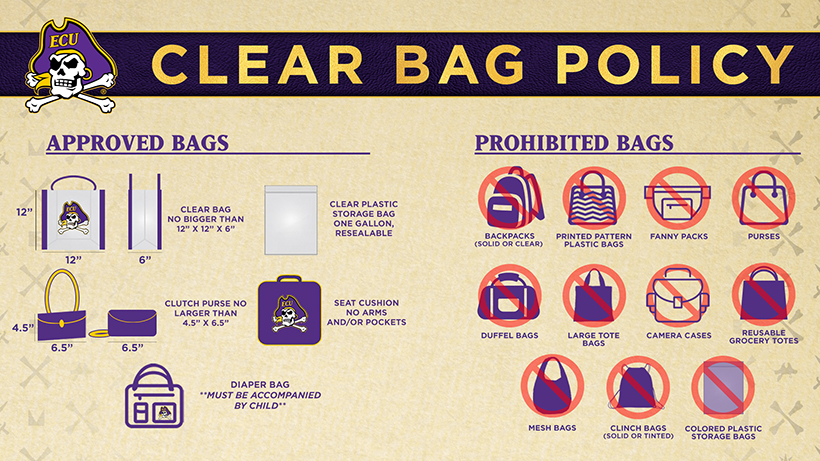 Only one clear plastic bag no larger than 12 inches by 6 inches by 12 inches or a one-gallon, clear, resealable plastic storage bag per person will be permitted. Fans will also be allowed a small clutch purse not to exceed 4.5 inches by 6.5 inches.

The ECU Athletics Department provided all football season ticket holders with one complimentary bag per household. Fans interested in purchasing an approved clear bag may visit the Dowdy Student Stores in the ECU Main Student Center as well as other area retailers.

One small change made last week by ECU Athletics. Diaper bags and non-medically necessary items are allowed if accompanied by an infant or young children. Each member of a family, including children, can carry an approved clear bag and clutch purse into the stadium.

No other bags will be allowed inside Dowdy-Ficklen Stadium. All items, including clear bags and clutch purses, are subject to search at the gates.

As part of its emphasis to improve the gameday experience, beer and wine will be sold at select locations inside Dowdy-Ficklen Stadium for the first time.

Beginning this football season, fans will be able to purchase beer and wine at eight stand-alone locations around Dowdy-Ficklen Stadium. Each person 21 or over will be required to wear a wristband in order to purchase, possess or consume alcohol. Wristbands will be issued with a valid ID to individuals 21 and over at kiosks inside the venue. Individuals consuming alcohol must always be able to produce a valid photo ID as stadium personnel may ask to see an ID at locations away from the original point of sale.

Only one alcoholic beverage per person may be purchased per transaction. Sales will begin two hours prior to kickoff inside Dowdy-Ficklen Stadium with all sales scheduled to end at the end of the third quarter.

In partnership with Aramark, a variety of domestic, imported and craft beers will be available for purchase. Concession stands inside the student section will not sell beer and wine.

Please read the full release and Q/A on beer and wine sales.

Dowdy Student Stores wants to make sure fans are ready for the second half of each game in Dowdy-Ficklen Stadium. Beginning with the home opener, a new Pirate tradition will take place, "Rowdy in Dowdy," as all fans will have a chance to catch a t-shirt compliments of Dowdy Student Stores.

Multiple TVs were installed in the upper concourse on the North side of the stadium to ensure fans aren't disconnected from the game when leaving their seats.

East Carolina Athletics has established a pickoff and drop-off point for Uber and Lyft on Saturdays.

Prior to kickoff and during and after game, ride-sharing drop-offs will continue at 14th Street between Elm and Berkeley. Ride sharing and personal vehicles, including golf carts & low speed vehicles, will NOT be allowed access beyond campus road blocks without proper credentials. This policy includes all ride sharing services.

Your support is vital as we all align together to restore the prominence of ECU Football. We need you at Dowdy-Ficklen-Stadium for our six home games beginning this Saturday, Sept. 7 against Gardner-Webb. The 2019 season ticket packages include six home games and tickets are at least $75 lower than last year's and even less in some cases. Fans who purchase multiple tickets will see a significant savings. We want our pricing to be affordable for all Pirate families. Please

The 2019 season ticket packages include six home games and prices will be at least $75 lower than last year's and even less in some cases. Fans who purchase multiple tickets will see a significant savings. We want our pricing to be affordable for all Pirate families and we offer numerous payment plans. The new pricing structure for 2019 includes: