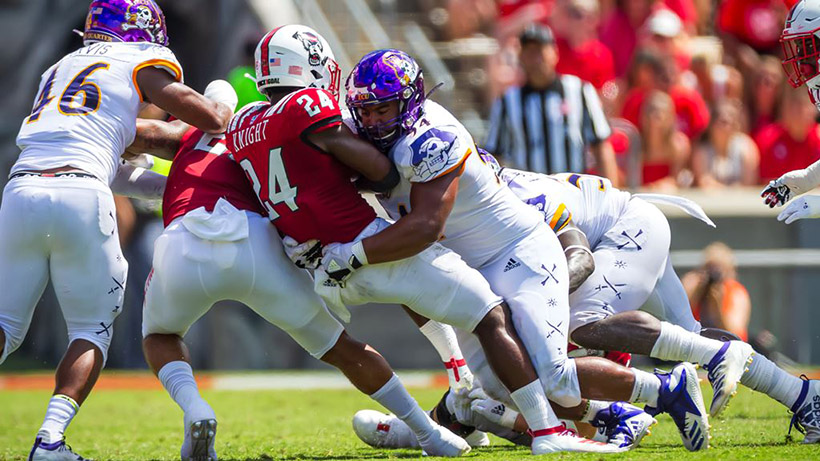 
RALEIGH, N.C.     Nine months removed from a season-ending, lopsided loss to one of its biggest rivals, East Carolina's football returned to NC State's Carter-Finley Stadium on a toasty, sun-splashed Saturday with a new coach and new attitude.

The Pirates exited with a 34-6 defeat - certainly not what Mike Houston wanted for his debut as head coach but a significantly more competitive effort than the 58-3 end to a third-straight 3-9 season. Two crucial first-half turnovers - one at the goal line on the opening possession - dropped passes and an inability to cash in on NC State's miscues extinguished any hopes of making a season-opening splash as the Pirates fell behind 17-3 by halftime and saw a string of quarters without a touchdown extend to 10 dating back second quarter of loss to Cincinnati.

"Obviously not pleased with the outcome of the ballgame," said Houston, whose James Madison team defeated ECU in the season-opener two years ago and fell to NC State last. "I thought they did the things they needed to do today in order to win the ballgame. They did not turn the ball over, even though they did have some balls on the ground. We were not able to take advantage of that."

Two drastically different teams that ended the season last year on Dec. 1 squared off Saturday before a sold-out crowd of 57,633 that thinned considerably after halftime. Turnover in coaching staffs and personnel created intrigue for the 31st meeting of the long-time rivals.

ECU sophomore quarterback Holton Ahlers, who chose to stay home and play for ECU over an offer from NC State, watched from the sidelines last year due to an injury but got his chance to start after winning a preseason battle with Reid Herring. Ahlers had a hot hand early, completing his first seven passes, but finished 22 of 39 for 168 yards. He was intercepted once and sacked three times.

Ahlers had little help from a running game that produced just 41 net yards on 29 carries, but Houston expects improved play from his left-handed offensive leader.

"I think he's better than what he played, and I think he'll say the same, exact thing," Houston said. "I love him. I'm glad he's our quarterback. I didn't think that he had the kind of performance today that we expect from him and that he expects from himself."

One play quickly changed the mood for both Ahlers and the Pirates on Saturday. ECU's opening drive could not have unfolded better until a Chris Ingle separated the ball from Ahlers at the one-yard line and Jarius Morehead recovered in the end zone for a touchback. Ahlers had directed an impressive drive, connecting on all six of his passes to four different receivers for 47 yards. He appeared headed for a score on a keeper on a first-and-goal run from the 9 before turning the ball over.

"The helmet just hit the ball and I lost it," Ahlers said. "That won't happen again. That's on me."

Houston didn't downplay the importance of the missed chance of jumping on top early.

"They don't give you any ribbons for coming close," he said. "That was a big play in the ballgame because that completely changed the outlook of the first half.

NC State needed just six plays and 1:50 to respond, covering 80 yards and taking a 7-0 lead with freshman Zonovan Knight scoring from nine yards out on his first career carry. Matt McKay, making his first start, threw strikes of 19 and 18 yards to Thayer Thomas on the drive.

Sophomore kicker Chris Dunn, who set a school record with 23 field goals a year ago, boosted the lead to 10-3 with a 27-yard field goal with 10:01 left in the half. A 34-yard sprint by Tabari Hines on a reverse set the Wolfpack up at the 13, but the ECU defense stiffened.

The Wolfpack could not cash in a Chris Ingram interception on the next series, but McKay bulled into the end zone from the four with 51 seconds left - one play after ECU was unable to scoop up a fumble that squirted six yards on the turf and ended up in the hands of offensive lineman Emmanuel McGirt.

That was one of three fumbles the Pirates were unable to corral. NC State did not commit a turnover; the Pirates had two.

"We fumble going into the end zone, they get it," Houston said. "They fumble going in, and they get that one. If those two are flipped, it's a completely different halftime score.

"If you're around the ball, good things happen. We had, I think, three balls on the ground today that we did not get the fumble. There was a tipped pass where I thought the free safety had an opportunity if he's breaking on the ball has a chance for an interception. We've got to translate the you should have been there to we're there."

McKay, a redshirt sophomore, was efficient in his first start, completing 25 of 37 passes for 308 yards and one touchdown. He also ran for 35 yards and a pair of scores, highlighted by a 21-yard scamper that put the Wolfpack up 31-3 early in the fourth quarter.

McKay found Hines four receptions for 74 yards and one carry on a reverse for 34 yards. Hines' first three catches came on the Wolfpack's second possession of the second half, capped by a 48-yard touchdown from McKay that extended the lead to 24-3.

Emeka Emezie led NC State with seven catches for 70 yards, and Thomas had six for 83 yards.

Jake Verity accounted for all of ECU's points, booting field goals of 47 yards in the first quarter and 31 yards with just 1:18 to play.

Now ECU turns its attention to Gardner-Webb and its home opener next Saturday at 6 p.m.

But he does believe the foundation is being established.

"I was pleased with the fact that our guys fought all the way through because that's not an easy situation to be in there in the second half," he said. "That's my biggest fear right now is some of the things we saw last year, that stuff has to be out of our program. I did think we did a pretty good job of that. I want to look at the film and see who was playing hard all day, but just on the hoof, I thought that our guys continued to compete."