County Home Road. The name is sort of self-explanatory. Somewhere along this stretch of highway south of Greenville was a building or buildings where some people lived. east carolina university, ECU, county home road, digging, august 30, 2019
Home
Categories
Login 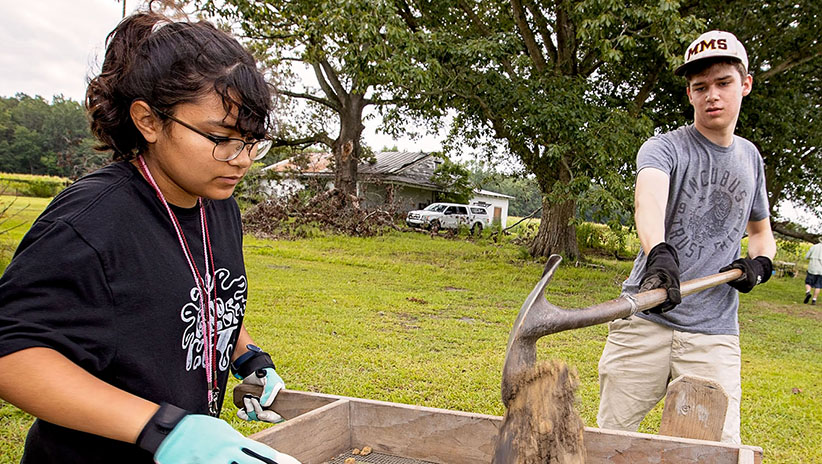 County Home Road. The name is sort of self-explanatory. Somewhere along this stretch of highway south of Greenville was a building or buildings where some people lived.

But who were they? Why were they there? What was their life like? And when did they leave?

Those are questions a group of high school students from across the state were working to answer - or at least discover some clues to - as part of the Summer Ventures program June 30 to July 27 at East Carolina University. 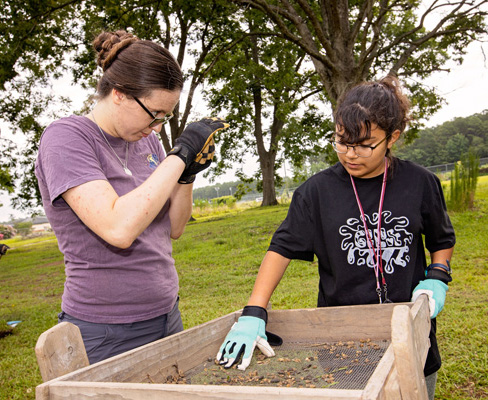 "The kids are great. They have a good attitude," said Charles Ewen, an ECU professor of anthropology who was leading the archeology project.

Students took classes during their first two weeks then chose a research project - one of which was learning more about the poor house and farm - for people who were not able to fend for themselves - once situated near what is now Alice F. Keane District Park. There, they found disturbed soil layers containing nails, glass and ceramics - clues to the daily lives of the residents.

"I love it. It's very different from what you see in the movies," Ella Kellner, 15, of Union Pines High School in Moore County, said as she sifted soil. "The only way to find out how they lived is by digging it up."

"It's fun being out in the field, doing hard work," added Sarah Hua, 17, of South Iredell High School. "It's nice to be outside."

At least on that July day it was, with clouds and a slight breeze providing some solace from the summer sun compared to earlier days. "We're finding stuff, so we were hopeful. We felt like we were dying, but it was worth it," Hua added with a laugh.

Their month at ECU culminated in research presentations where they showcased what they had learned. 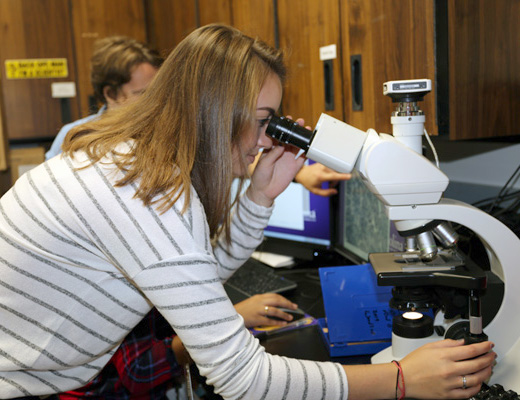 Summer Ventures participant Catherine Wondra studies a slide containing a section of rat livers in a physiology laboratory at the Brody School of Medicine. | Photo: Kristen Martin
At the Brody School of Medicine, Anushka Nandy and her research partner, Catherine Wondra, worked with Jamie DeWitt and Tracey Woodlief in the Department of Pharmacology and Toxicology. They studied per- and polyfluoroalkyl substances and their impact on liver health and presented their findings to a room of their friends and families.

"We sectioned rat livers all summer, and it was incredible," Wondra said. "I think my favorite part was knowing that I get to do valuable work. We might not see the full benefits of it, but it's just knowing that we're a part of it."

The Summer Ventures program is a state-funded program for academically motivated high school students potentially interested in a career in science or mathematics. At ECU, the Center for STEM Education in the College of Education administers the program. In addition to ECU, the University of North Carolina at Wilmington, Appalachian State University and UNC-Charlotte participate.

Shawn Moore, who oversees the program at ECU, said Summer Ventures can open the eyes of students who might not have experienced research and discovery to what they can accomplish in their education and careers.

"Absolutely," he said. "It allows them to consider other options other than what they have always thought they want to do."

And hosting the program puts ECU in the spotlight for these students.

"I think it's a beautiful campus," said Anna Kunz, 17, of Davidson, as she took a break from sifting soil at the County Home Road dig site. She wants to major in environmental studies and eventually go to law school. She didn't know much about ECU before but could see herself becoming a Pirate one day.

"I like it," she said. "I'm definitely considering it now."