Did You Know? The Uneven Performance of UNC Education Schools | Beaufort County Now

Did You Know? The Uneven Performance of UNC Education Schools

Published: Friday, September 13th, 2019 @ 12:23 am
By: James G. Martin Center for Academic Renewal   ( More Entries )
Publisher's note: The James G. Martin Center for Academic Renewal is a nonprofit institute dedicated to improving higher education in North Carolina and the nation. Located in Raleigh, North Carolina, it has been an independent 501(c)(3) organization since 2003. It was known as the John W. Pope Center for Higher Education Policy until early January 2017.

The National Council on Teacher Quality (NCTQ) rates teacher education programs on how well they teach different subjects such as science, social science, and content knowledge. As Shannon Watkins describes, most public North Carolina education programs do a poor job teaching the future educators of the state.

And education schools at University of North Carolina schools are all over the map; for high-school level science and social science, 10 of their graduate programs earn Fs and the other eight earn As. For elementary-school level content, East Carolina University and UNC-Charlotte, which focus their graduate programs on elementary school preparation, both received Fs.

The problem of graduate programs doesn't appear to extend to undergraduate preparation, however. The undergraduate education programs at UNC schools for high school fared well in science and social science, with poor marks only at UNC-Charlotte. But teacher preparation for elementary schools is an issue. Only Fayetteville State University and North Carolina A&T earned a B and C, respectively-most undergraduate institutions received an F. 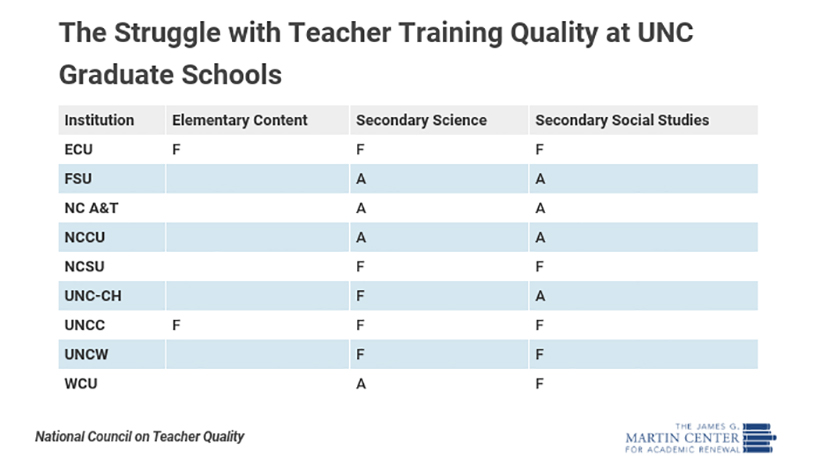 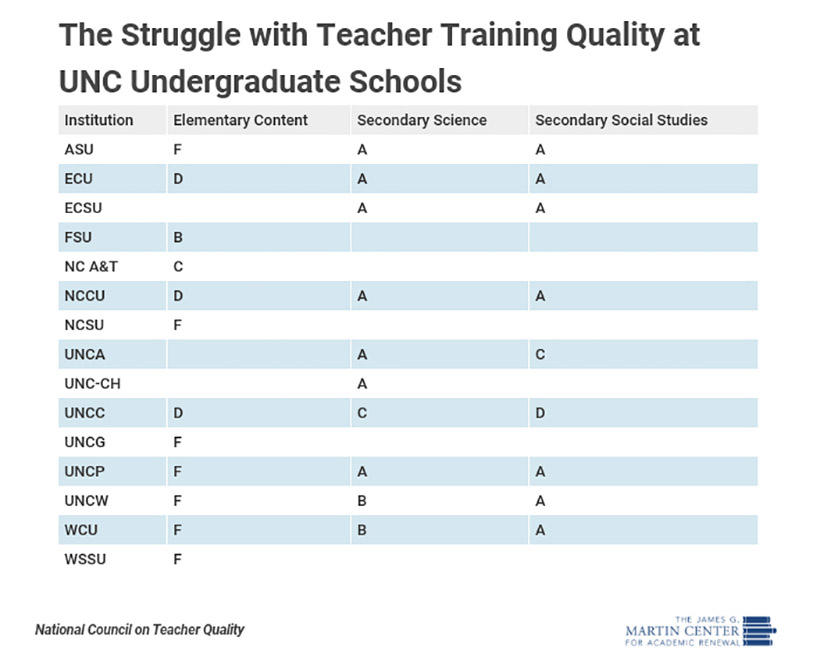 Shannon Watkins offered some explanations for the problem:


Education schools need to raise their admission standards and make sure that students can teach basic subjects at a high standard in their future classrooms.

David Waugh is a Martin Center intern. He studies economics at Hampden-Sydney College.